Today was no ordinary Sunday. I'm still not sure what an ordinary Sunday will be in this town anyway. But today was definitely not it. Right before we went to bed last night, B asked if I wanted to take a day-trip to South Bend today. So we did!

We attended mass at Notre Dame's Basilica and then walked all around the campus, where B showed me stuff from his college days. (I've actually had his tour before, but it was over four years ago. This one was much more detailed.) I'm only going to show the "what I wore" picture because I'm exhausted, but I promise an honest-and-true photo-dump later.
I think I did a LOT better with my outfit than last week, to say the least. 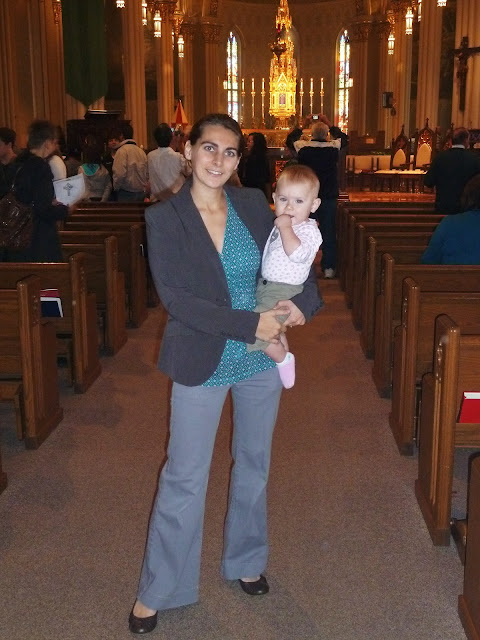 The top is from New York & Company. The blazer is also NY&CO, but bought secondhand from another blogger who was cleaning out her closet (thanks, chambanchik!). The pants (which I also wore in Week 1) are apparently Spoon brand, and I think I got them from the Delia's or Alloy catalog--they're an odd-numbered size, which means I am wearing Juniors-sized clothes at age 28. The shoes are the same as Week 2, and they are American Eagle from Payless. I changed my shoes almost immediately after this picture, since I knew we would be doing a lot of walking.  Also, instead of a ponytail holder, I have my hair pulled back in my Lilla Rose clip. Love that thing.

And the baby? I let B dress her, and then I commented that "she looks like she's about to go camping."

Speaking of the hubs, I couldn't leave you hanging on this Veterans Day without a picture of the handsome veteran I married :-) 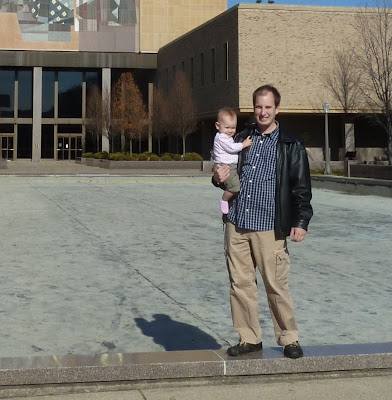 Thank you to all our veterans!
Labels: fashion, indiana, military spousehood, travel