— 1 —
B started his new job this week.  He didn't even know what hours he works until he showed up the first day.  Looks like it will be 6:30am-3:30pm.  Kind of a yikes, but I'm glad he's home around 4. He's also working both days this weekend, which makes me start to question why he ever left the Navy. Hopefully it will settle down soon (and maybe he'll get some overtime or comp time, since they're making him clock in even though he's salaried).


— 2 —
Today is All Souls' Day.  Yesterday, All Saints' Day (yep, went to mass!). And then there was this uber-Catholic family on Wednesday:

So I found this on CatholicMemes.com, but then looked up the blog it was actually from.  Wow!  So much awesomeness over there on Shower of Roses.  Check out their the detailed post about the saints party and their pumpkins!

— 3 —
On Tuesday, I had gone out briefly after B came home to get my free taco and then to check the mail. T-Bell is so close that the heat never came on in my car, but it was raining and cold cold cold. After I checked the mail, I came back into the apartment whining, "I hate this! I'm so cold! My hands are freezing! I want to go back down South!" and I put my hands on B's face for dramatic effect.

Well, as part of the mail I had just brought in there was a package from my mother.  Among other contents, there were . . . handwarmers.

That was probably the quickest mood shift I've ever had.


— 4 —
Yes, we dressed our baby up for Halloween! We took her over to her great grandmother's house.  She was the only trick-or-treater since she lives in a neighborhood for retired people. 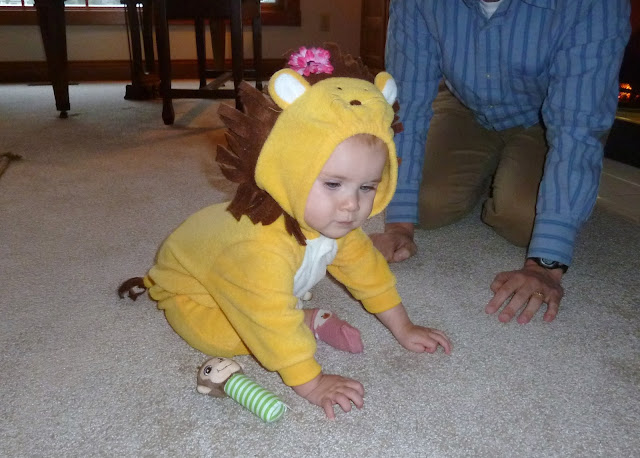 Yes, she's a male lion.  A female lion would just look like a cat. But don't you like that pink flower I added?


— 5 —
We had a recipe fail yesterday. It was quite odd, since usually I'm the picky one, but it was B who said, "I don't like this at all!" Neither of us like avocados, and even the baby didn't like them when we tried a few months ago. But all these crunchy mamas keep touting them as "superfoods" and blah blah blah, so I tried this recipe for creamy avocado pasta. With enough Parmesan and basil, I found it mostly palatable. And it looks like I'll be eating the leftovers and never making it again. I guess we're just not avocado people.

Update: I had one avocado left over and mixed it with some plain yogurt for her lunch, and baby liked it! Still not sure if I'll be buying avocados again, though.


— 6 —
I made my first craigslist sale this week! It's a kitchen appliance I've barely used, so I decided to salvage it from the Goodwill pile because it's in great condition. My husband thinks I'm going to get stabbed when I meet this person tomorrow, even though I chose somewhere public to do it (the CVS parking lot). He'll be at work, so here's to hoping all goes well. I'm also hoping that CVS has some cheap candy corn so I can make these.

— 7 —
Oh, I forgot to update everyone after my previous Quick Takes (#2). Yes, we have a dishwasher! However, be careful what you wish for, because it's not a very good one. I think I need to switch to liquid detergent or something.

Thanks to Jen for hosting. For more Quick Takes, visit Conversion Diary.