Today is Thanksgiving, Round 1 in our house. B's grandma is going on a fab trip to NYC for actual Thanksgiving (and she gets to see the Macy's Parade!), so she wanted to do Turkey Day early. We complied, and I have corn casserole in the oven as we speak.

We also accepted an invitation from other family members to hit up Saturday vigil mass and then a nearby Italian restaurant afterward.
Before I show you what I wore to church, let's talk about shoes for a second. Here is a picture of my shoe rack: 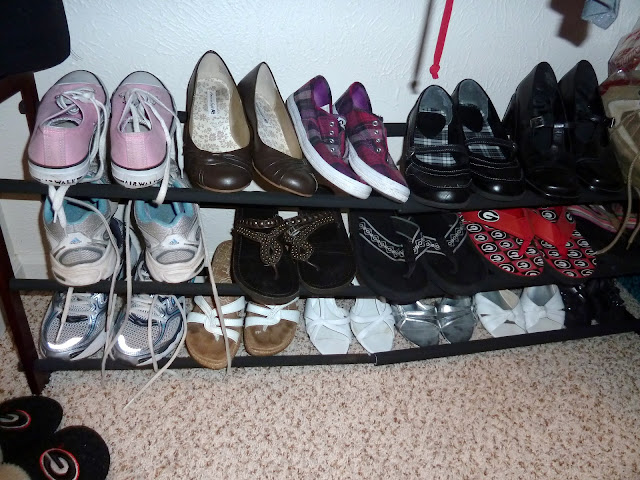 Do you notice anything wrong here? Like the fact that I live in northern Indiana now and about 67% of the shoes I own are open-toe or sneakers? The truth is that I hate shoes. One of the first things I do when I get home is take off my shoes. And it's not because I'm trying to keep the carpet clean or any frou-frou reason like that. I also dread shoe-shopping. Because no matter how comfortable a pair feels in the store, it is just never the same when I actually wear them. The two pairs of "nice" black shoes in the upper right almost never get worn because they're just not comfortable. I've decided to blame my feet. I think my right foot is bigger than my left and that my toes are wide-ish but the rest of my foot is narrow. (B blames it on wearing flip flops for 10 months a year while in FL--his theory is that my toes got to spread out.) I don't know. But I have actually added two pairs to this collection recently, for better or for worse.

And one of those pairs is the ever-so-trendy riding boot. I revisited the idea of jeans at mass since I also added a pair of skinny jeans to my closet as well.
Tank top: Merona from Target; Cardigan and belt: Charlotte Russe; Jeans: Old Navy; Boots: Solanz from Shoe Carnival: Watch: Fossil; Necklace: from some Catholic church bookshop (it's a cross with my birthstone in the center)

I'm still getting used to the boots, and B told me that somewhere around the internet he read that it takes 60 days to break in boots. Maybe that has been my issue with all my shoes? Usually I just give up after wearing them three times.
Labels: fashion, holidays