We went to Saturday evening mass since B had to work both weekend days (but he gets home at 4). Any Catholic can tell you that the vigil masses are much more casual, so I didn't end up changing anything but my shoes from what I was wearing earlier in the day. Even two of the Eucharistic ministers were in Notre Dame hoodies/jerseys.  I guess that's acceptable here.
I really don't like wearing jeans to church. It just feels so informal. But I also didn't want to change my entire outfit, and the church we've been attending is always cold.  Or maybe we just sit in a draft.  No, it's definitely cold because most people do not take off their coats throughout the whole service. Either way, the blue jacket stayed on throughout the entire mass. It came in handy when baby got fussy during communion and I just nursed her through it without exposing too much (this doesn't happen very often).

Blue zip jacket is Nike (a gift from a few years ago). Green shirt is Old Navy. There's a gray tank under it since it's kinda see-through. The jeans are Aeropostale .. The pink chucks aren't actually chucks, since they're Airwalks.  The scarf is my first and only crocheted-by-moi neckwear.

The baby is wearing a homemade UGA onesie, a pink Notre Dame zip hoodie (it has a shamrock you can't see in this pic), purple Fuzzibunz babylegs that I got as a bonus in an order of cloth diapers, and UGA socks. And if you're curious about her diaper, she's in a red-edge GMD prefold with an Econobum cover. I won't tell you what underwear I have on, though. 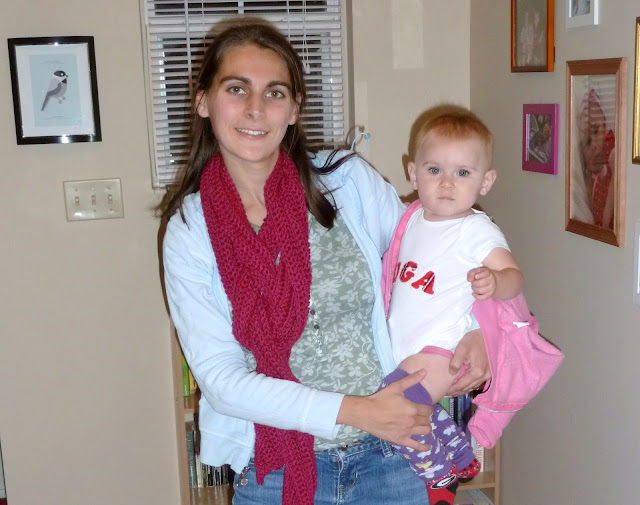 Now that's enough about what we were wearing--let's talk about some football. For the first time this season, both my Georgia Bulldogs and B's Fightin' Irish were playing at the exact same time (see: baby's outfit). We have one TV, so actually going to mass during the most of that time was a good compromise. We came home to an easy win for the Dawgs, but boy, that Notre Dame game about gave us a heart attack as it went into triple overtime!

I should probably apologize to our downstairs neighbors as I couldn't contain my jumping and hollering last night. Thankfully, the Irish won! And now we're thinking that with B's team ranked 3 and my team ranked 5, they just *might* get to play each other--which hasn't happened since before either of us were born. And if that does happen, I have already decided that Baby Cora will cheer for whichever team is winning :-)
Labels: fashion, sports