On Sunday we took advantage of some nice weather with a little day trip to "see the sights" of South Bend. It was actually more of a nostalgia trip for B, since he is a proud graduate of the Class of 2005.

There are two ways to get to South Bend from here. One is via the interstates, and the other (which is apparently quicker) takes you through the boonies of the Hoosier state. Oh, who am I kidding? You can drive about seven minutes west from our apartment and you're in the boonies. But we got to drive through little towns with rusty barns and barely pronounceable names. Apparently we were also in Amish and Mennonite country. It looked a lot like this for an hour: 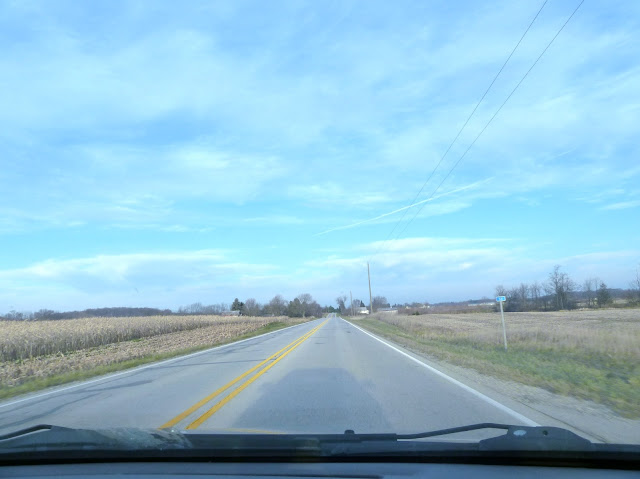 Once we got up to South Bend, we bee-lined it to get to mass on time. Notre Dame is mostly a walking campus, so we had to trek fifteen minutes on foot to get to mass. (Hey, at least it's flat! Says the girl whose college campus was on a huge hill.)

After mass, B gave me and baby the "grand tour." This was actually a re-visit for me, as back in 2007 I was given the "baby grand tour." This time we chanced upon some Taco Bell for lunch at the student center (or whatever fancy name that building had). We then moved on to the library, where "We're Number 1" Moses stands.
And of course we made a visit to Touchdown Jesus.
We then took a little break to stop and smell the flowers eat the leaves. 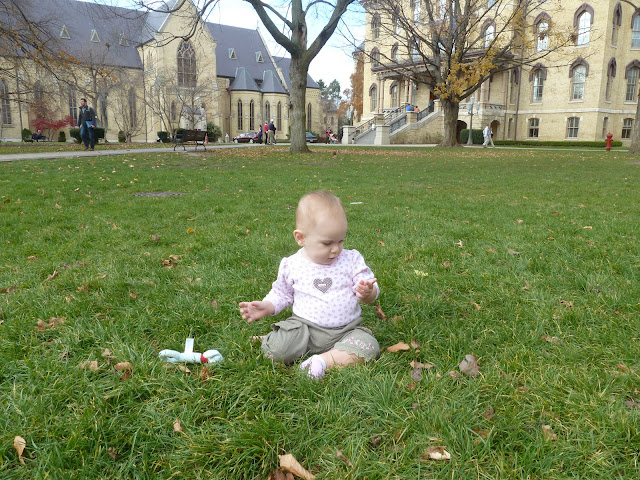 And look at the ducks:
We also hit up the stadium, the Grotto, and the football practice fields. B kept pointing out buildings that apparently didn't exist the last time he was here, although they blended quite well.

Our day was not without calamity, of course. Baby Cora pulled one of her socks off while we were wandering around and dropped it somewhere, never to be seen again. Then our one-sock baby wet through her clothes while we were in the bookstore. B tried to put her new outfit on in a little sitting area, but she's getting to that stage where she hates getting dressed and will try to escape from it. So that's how this happened:
B was hauling her off to the bathroom to clean her up when I realized I had a camera and could get a picture. For posterity's sake, of course. Poor baby.

At least we got one good family picture to cap off the day: