I love making dessert.  I would hazard to say that I'm more of a baker than a cook.  I like the precision and I have a major sweet tooth.  I tried this new one a few days ago, aptly titled "Muffins That Taste Like Doughnuts."  I'm a fan already because of the versatility.  These can be a dessert, a breakfast, a quick snack, whatever.  I love those "old-fashioned" doughnuts, and the texture of these muffins is similar. Kind of a dense cakey feel (have a glass of milk handy!), and they sorta taste like the cinnamon-sugar doughnuts.  But I haven't had one of those in a really long time, so that's a guesstimate.  Next time I make them, I'm think I'll do a side-by-side doughnut-to-muffin comparison. 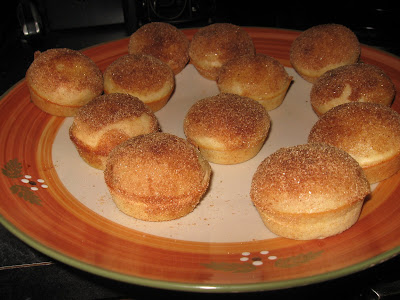 What's great about a muffin is that you don't have to fry it -- automatically healthier than its doughnut doppleganger.  To do the topping, you dip the muffin in melted butter and then roll it in cinnamon sugar.  I found the recipe on Tasty Kitchen, although really I only found it because your friend and mine The Pioneer Woman mentioned it on her cooking blog last week.  I think what really inspired me to make these is the fact that I already had every ingredient on hand.  (I was surprised that I actually own nutmeg, since this is the first time in my memory I've ever used it.  I might've inherited it from a roommate or maybe even B owned it?)  Check out the full recipe and go make your own.  Stat!  If anything, it will make your kitchen smell amazing.  It cleared out the smell of my attempt at Indian food in a pinch :-)

I have to really love a recipe to type it up and add it to my recipe book, and this one made the cut!  So easy and soooo delicious!