My husband B doesn't really like to play favorites.  No favorite singer, no favorite book, not even a favorite hooded sweatshirt.  But one thing I have picked up on is his extreme liking for Chicken Tikka Masala.  He discovered this dish when he was studying abroad in London during college, and his passion for it never left.  When I visited him this May on a port call in Scotland, he preferred Chicken Tikka to Haggis 3-1.  When I mentioned taking the feat of making his beloved dish on my own, my one Indian friend (wow, I've really only ever had one?!) told me to just go buy some at an Indian restaurant and pretend I made it.  She's probably right, but I'm too stubborn and frugal for any of that tomfoolery.  So last night, with him still deployed, I decided to attempt it.

Well, actually the whole process of attempting it started a few days back when I was driving all over town to find the ingredients for it.  I guess this was a good reason to finally buy coriander.  I found most of the components at my regular grocery (plain yogurt, anyone?), but the Garam Masala spice mix eluded me.  I was already out in town, so I dialed up Goog-411 (yes I live in the dark ages and am quite content without an iPhone and its accompanying invoice) and found a place called Taj Bazar on the Boulevard (what isn't on the Boulevard in this area??).  Score!  I even found some naan, so we could get the full experience here. 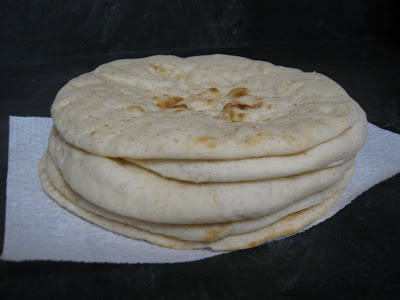 My carbo-holic self could eat this stuff all day!

I decided to use a recipe featured on The Pioneer Woman's cooking blog.  I love the pictures of each step -- so great for an amateur chef like me.  I obviously did not need 6 servings, so luckily for me, this recipe was also posted at the PW's recipe-sharing community Tasty Kitchen.  And Tasty Kitchen has a nifty converter feature, so you don't even have to do any math!

Or so I thought, anyway.  The water for the rice isn’t listed on the ingredients so I had to do the math for that, along with the Garam Masala spice and some other items.  Check out my hasty fractions to figure out the water for 4 servings of rice: 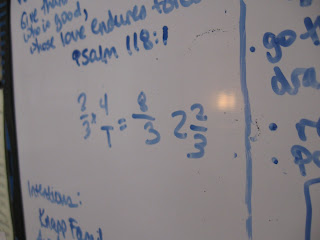 I took AP Calc for this?

Also, I would like to say that this recipe's difficulty was grossly underestimated -- it was by no means "easy"!  I haven’t been cooking for very long, and this is probably one of the most ambitious recipes I’ve tried.  Since you have 3 things going on – broiler, rice, and stovetop, I really wouldn’t call it easy.  I will say that this was my first time ever using B's rice cooker, and I'm completely SOLD.  Throwing all the ingredients in this puppy and flipping a switch?  Now that's easy!  The rest of it . . . well, notsomuch.

In the past year or so, I've discovered that I have a pretty nasty intolerance to garlic (it makes me nauseous), so I had to skip that step.  That was probably a giant mistake, due to the moisture that garlic can add.  Maybe I should've just added more butter or something in its absence.  But again, amateur chef over here.  Basically what happened was that my pan was too dry when I put in the spice mix and it kicked back at me and my sinuses, sending me into a wicked coughing fit and smoking up my little apartment.  I had invited a friend over to be part of my cooking adventure, and she was on the phone discussing wedding plans with her future mother-in-law during all this culinary commotion.  I was pretty concerned my smoke alarm would go off, but I was able to curb it by immediately grabbing the tomatoes and throwing them in (thank God I’d already opened the can, time was of the essence here!). Next time I make it, I’ll do tomatoes first, then spice and let it simmer.  Garlic problem = solved.  (I hope.)


My finished product didn’t come out in that nice orange color from the picture – it was more like a sludgy toilet brown. It might’ve had to do with how dark my Garam Masala was to begin with?  It’s sort of a deep red/brown. 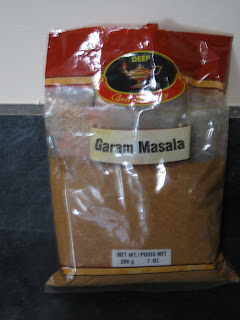 You don't even know how happy my apartment is that this does not contain curry.

Overall, it tasted decent, but a bit too spicy for my friend and I, so we chopped up a fresh tomato and threw it in and that helped a bit.  And thanks to the fabulous naan, we ate this with our fingers like real Indians!  Well, for about three minutes anyway, then we switched to forks.

I will be making this again, but with a few tweaks.  Hopefully next time I’ll get it right and not burn the place down in the process.  B and I had discussed having this for his "first night back" homecoming meal, but I think I'll be breaking it to him gently that he's getting tortellini instead.