This post was inspired by my friend Elizabeth a.k.a. The Young Retiree, who is about to embark on her second cross-country road trip.  My mom and I (and sometimes other family members) have done THREE cross-country road trips.  Actually, I think my mom was bummed out that Uncle Sam didn't give us our shore tour in our #1 (and #2) pick of San Diego, just so we could've done another one.  Our last trip, back in 2007, was by far our best, longest, most well-planned, and most interesting.

So here are your must-see hits on a journey on I-40 from Virginia (or in our case, Atlanta) to San Diego.  Mind you, this was only Leg 1 of 3 of our monster adventure.  Perhaps I'll post about our other legs and other trips at a later date.  Here's a Google map overview of the route:

(If you're starting/ending in southeastern Virginia, I would suggest adding Asheville, NC, and Nashville, TN, to your itinerary.  I've actually never been to Asheville, but I hear it's awesome.)

Stop 1:  Memphis.  Graceland, amazing barbecue (try The Pig on Beale St.), National Civil Rights Museum (includes the site where MLK Jr was assassinated), the Peabody ducks, and my favorite part of Memphis - Mud Island River Park--a scale model of the Mississippi that you can really get your feet wet in.  That's where my profile picture was taken: 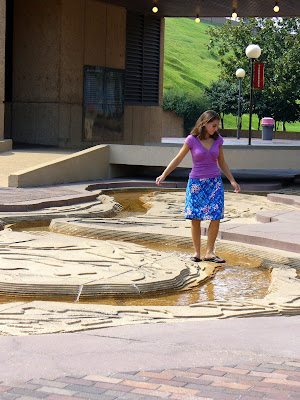 Stop 2:  Little Rock, AR - just go walk around Little Rock Central High School.  History was made here when the school was forced to integrate and the governor was quite opposed.  Read up on the Little Rock Nine to really appreciate this one.

Stop 3:  If you have time, go a bit out of your way and head down to Hot Springs, Arkansas.  A nice park and a cute place to spend the night.  And get some (hot) water out of the ground while you're at it!

Stop 4:  Oklahoma City.  Especially the Bricktown Canal area.  If you're there overnight, I hear that the bars are neat, and you can ride a boat to hop from one to the other.  Even if you're there during the day, it's really adorable.  We didn't do this because I wasn't too hot on depressing/reflective tourism at the time, but I hear the OKC National Memorial is a good place to go, especially the outdoor part with its Field of Empty Chairs.  Also, the restaurant Sonic is headquartered here, so it would be a sacrilege not to stop and enjoy some tots and a limeade. 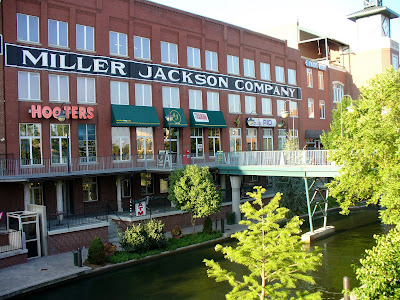 Bricktown area during the day
Stop 5:  Amarillo, TX - the Cadillac Ranch.  Get a can of spray paint before you head out here (we found ours for $1 somewhere in OKC).  Spray-paint your deepest feelings on this monument to old Route 66 roadside kitsch. 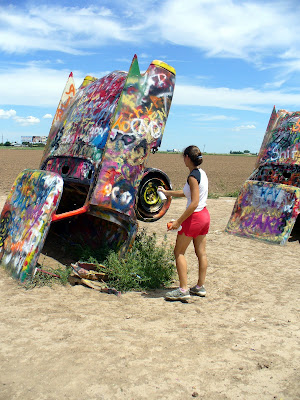 That's me contributing to a study in ever-evolving art
Stop 6:  Albequerque, NM.  Walk around the adorable Old Town area, and if you have the time, take the world's longest cable-car ride to the top of Sandia Peak.  Absolutely gorgeous.  A gal I knew in college even got engaged there. 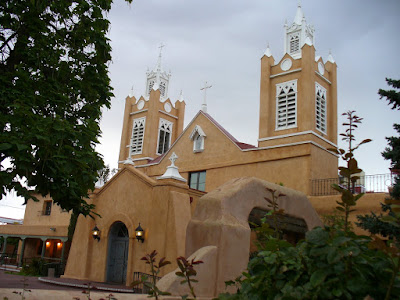 San Felipe de Neri Church in Old Town Albuquerque
Stop 7ish:  Once you're in Arizona, check out the Petrified Forest/Painted Desert National Park.  This is definitely a 'drive-through' park.  Do it.  Get out a few times and walk the paths to see the old hieroglyphs.  But don't take the petrified wood - buy some legally in the store on your way out. 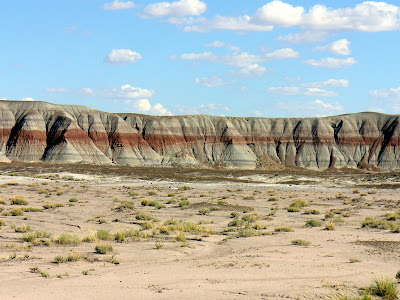 The beautiful Painted Desert
Stop 8?:  If you don't have time to swing north at Flagstaff and hit up the Grand Canyon's south rim and Vegas (that was a different trip for us), head down just a bit by the CA-AZ border to Lake Havasu City, AZ, and stretch your legs and practice your phony British accent at the London Bridge.  No, it's not the pretty Tower Bridge you're thinking of, but London Bridge was falling down (just like the nursery rhyme says) and the big city sold it to this town in 1968.  Which was good for Lake Havasu, since before us schmucks came into town to see this wonder, all they had were their seasonal lake people.  I will say, now that I've seen both the new London Bridge in London and this one, I much prefer the 'American' version. 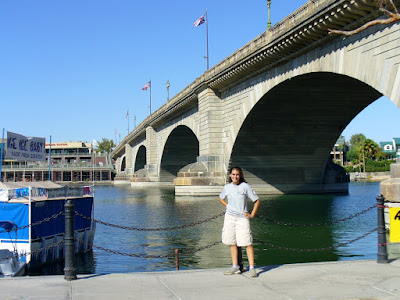 The flag directly up and to the left of me is a Union Jack
From this point, we went down toward Yuma, underwear drenched in sweat from the 110° temps, ready to get our bums as quickly as possible to temperate San Diego.

The other way to go is toward Joshua Tree National Park, which is probably worth checking out.  As for us, we were trying to beat my dad to the airport to pick him up in San Diego, so we were booking it but still trying to get a good glimpse over the fence to our left that (we're pretty sure) separated us from Mexico.

And for those of you wondering how we afford these road trips, check out our plush accommodations: 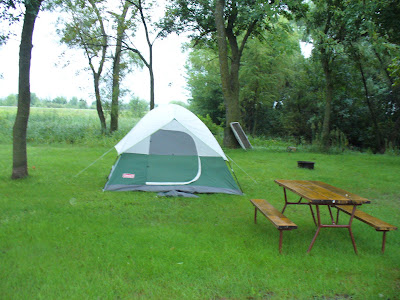 
Happy summer travels to everyone.  And remember that I am considerably jealous!