Not only is it on my 101 List, but it was also on my "focused" before-baby list. And hey, I think I've found a new hobby I enjoy! I spent about 2 weeks just learning a few stitches and techniques, using both Crochet Geek videos and a book I got from the library geared toward children (pictured on the right).

I also had to get someone to help me in person a bit because I just wasn't holding things right (that's my one of my gripes about Crochet Geek's video), and not using the hook to its full potential. My mom and sister sorta showed me when I was home for my GA baby shower.  The book only taught the single crochet stitch, but from the videos I learned a few more stitches.  I'm glad I did all that for a bit and didn't just dive head-first into a project.

I posted on an online forum for some help and was advised to try making a hat before a scarf.  It sounds weird, but it was great advice! It forced me to learn slip stitch/joining, crochet in circles, COUNT, and read a pattern. And it only took me a few days (I did it while we were traveling for Thanksgiving). My stitch got pretty consistent, also.  Here's the hat I made for my niece:

Here's the Crochet Geek video I followed for the hat.  The hardest part was the very beginning--I restarted it about 5 times until I figured it out.

After this achievement, I decided it was time to try a scarf.  I joined Ravelry, an online community for knit and crochet with a huge pattern database, got some pretty yarn, and decided on a pattern called "easy ribbed scarf" that looked both simple and interesting.  I mostly worked on it in the car while B drove us various places. 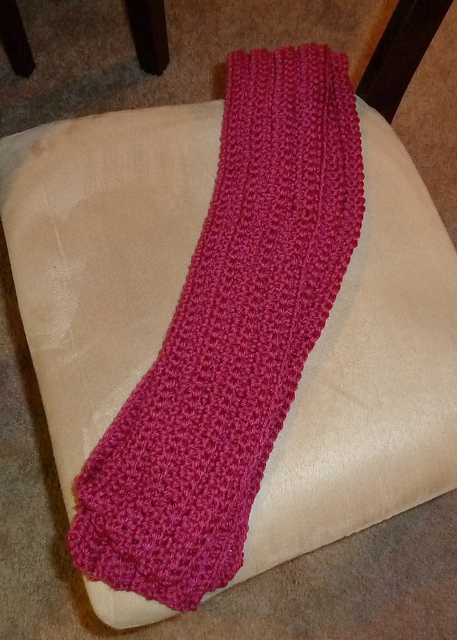 The pattern actually added fringe to the ends, but my scarf was already longer than what the finished (including fringe) measurement should be.  Maybe I'll put some on later, but this is fine for now.
Also, while I was at it, I decided to make a simple headband that I'd found by some means or another and thrown on Pinterest.
Even if you don't know how to crochet, I bet that headband could be made with a simple braid.  And I think that knot has an official name, I just can't think of it right now, but I'm pretty sure I learned it in Girl Scouts  (sheet bend knot??).

With my scarf and matching headband!
I now have other crochet projects up my sleeve (including a stuffed animal).  I'm really loving this new hobby of mine!