When I Fell In Love With Running

It's been a long up-and-down journey for me with running. I don't jump in to anything very quickly, and

In high school, I ran cross-country for one season, and one season only. I mostly did it to stay in shape for soccer season. I didn't mind running after a ball, but running the neighborhood streets in our very hilly part of Georgia ended up not being something I really enjoyed. I joined the Quiz Bowl team the following year instead of the Cross Country team. That was also the same year I ended up screwing up my knee in a soccer game, trying to brush it off, which then landed me in a few months of physical therapy.

I ran some races here and there for next few years, mostly for charities I was involved in. I was never really 'ready' for any of those. My senior year of college, my roommates asked if I wanted to go running at the trails behind the intramural fields a few times a week before class. I actually liked those trail runs a lot, until I eventually tripped on a root and sprained my ankle. I learned that sprained ankles can take almost 6 months to heal fully, and I was no exception.

Fast forward a few more years and I made a list of 101 goals to accomplish in 1001 days. One of my goals was to do the entire Couch-to-5K program, and then run a 5K without walking any of it. After I had my miscarriage, I decided it was then or never. I did the program, running with no music and holding my husband's watch in my hand so I could know when to run and when to walk. I dug out my knee brace when I realized that my knee was hurting for the next 24 hours after a run. But I wanted to finish what I started. I ran the Fiesta 5K through the streets of Pensacola, and then got pregnant the next day (or something like that). 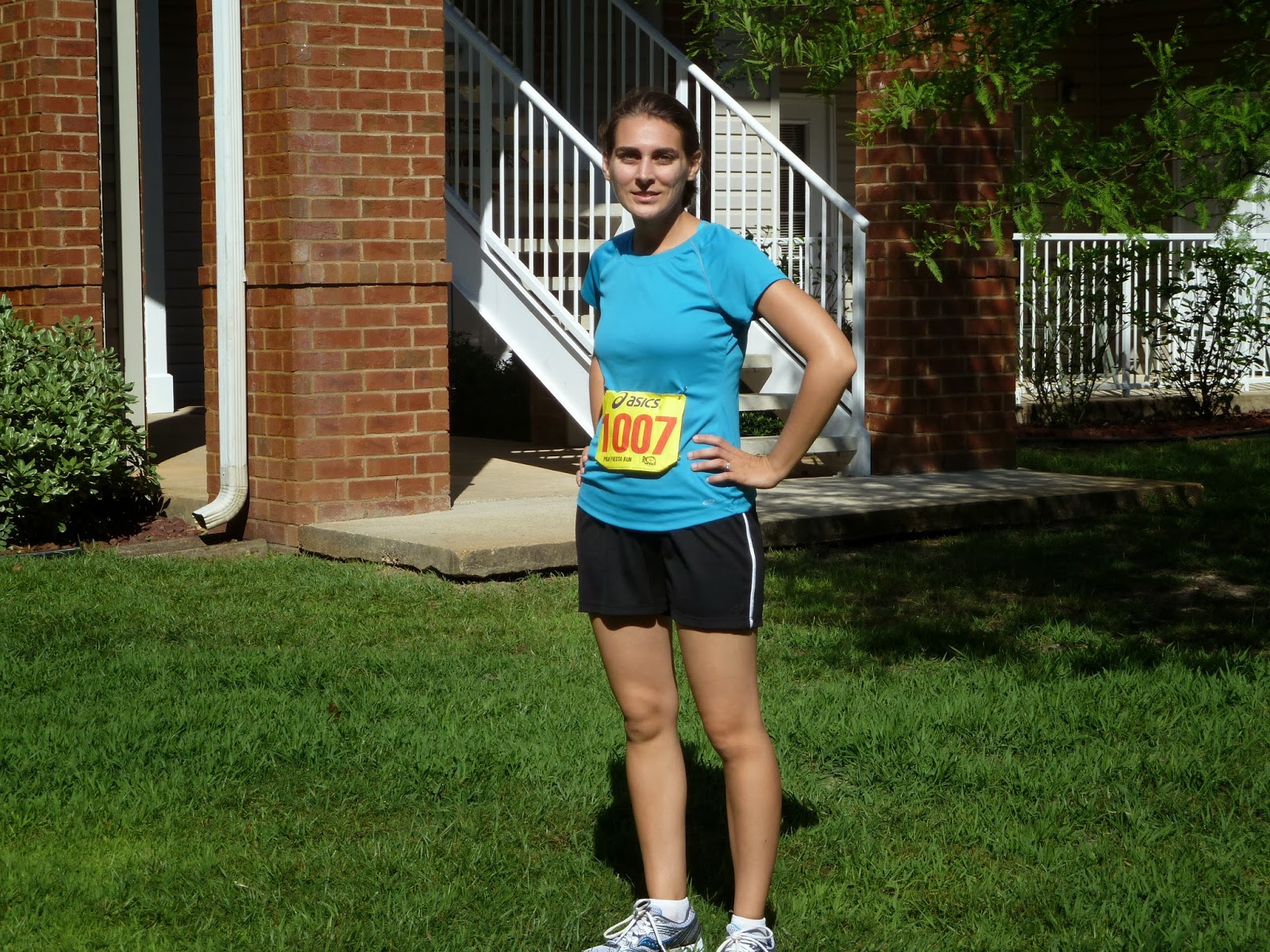 Combine Florida summer humidity with pregnancy, a bad knee, and someone who wasn't full sold on running, and I just flat-out stopped. I did the elliptical throughout my pregnancy. It wasn't until after my kid was weaned that I became a bit more serious about running again.

It probably helped that there is a fabulous trail system here in Fort Wayne. And that our YMCA was smack-dab in the middle of a 1.5-mile loop of trail. The child-watch policy was cool with you going out there as long as you left your phone number. So 3 times a week last summer, I would drop Cora off, do some stretching inside the Y, and hit the trail with phone in hand. I started with 1 mile. Then I just tacked on more and more distance each time. I just ran as far as I could and tracked it on RunKeeper when I got home. I got new shoes, an mp3 player, a pink sports watch, and I was feeling good.

I signed up for one race. Then another. And another. I even won my division in a small one. I decided to end my season with a 4-mile race, my longest distance. The Fort4Fitness 4-mile race is actually where I decided that I loved running. 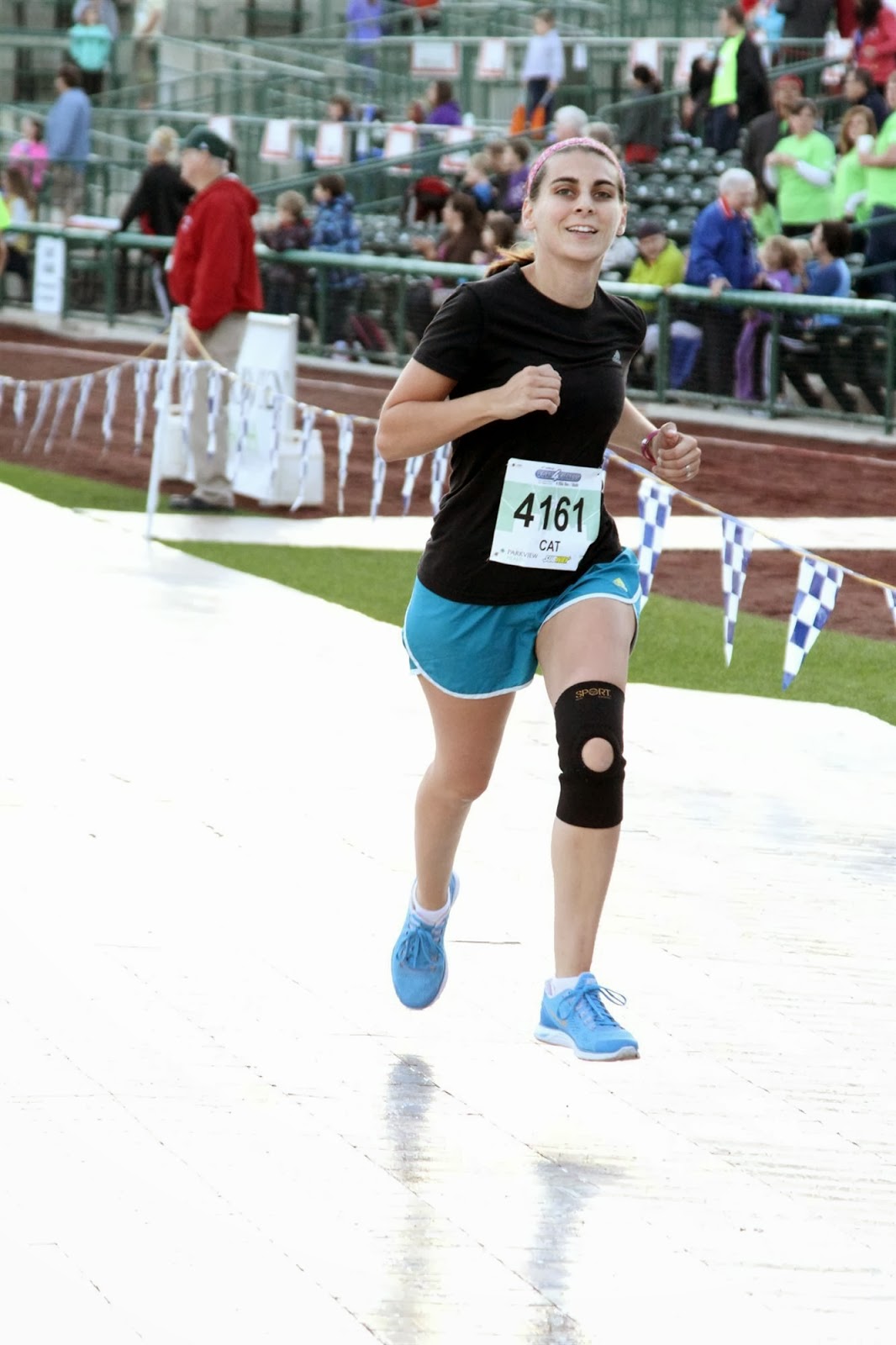 I had read some of the policies for the race, and it seemed they frowned on listening to music during it. So I decided I wouldn't. I would just enjoy the camaraderie of the biggest race in town. I remember being in line for the bag check when I overheard a girl tell her friend, "Well, I hate running, so I need music so I can take my mind off of it." I didn't say it aloud, but all I could think was that I'm pretty sure I said the exact same thing 6 months ago.

But during that race, somewhere among the rhythmic shuffling of everyone's shoes pounding the pavement, the dad behind me giving encouraging words to his daughter, the chalk art beneath my feet, and the chain of musings running through my own head, I found this thought bubbling to the surface: Hey, this isn't so bad. Actually, I kinda like this. Running has kept me motivated all summer, given me stories to tell, and provided me the time to think through all the junk in my head. Perhaps I won't take the winter off. Maybe I even love this? And maybe I could push myself even harder eventually.

It took 29 years, but I was finally ready to call myself a runner. 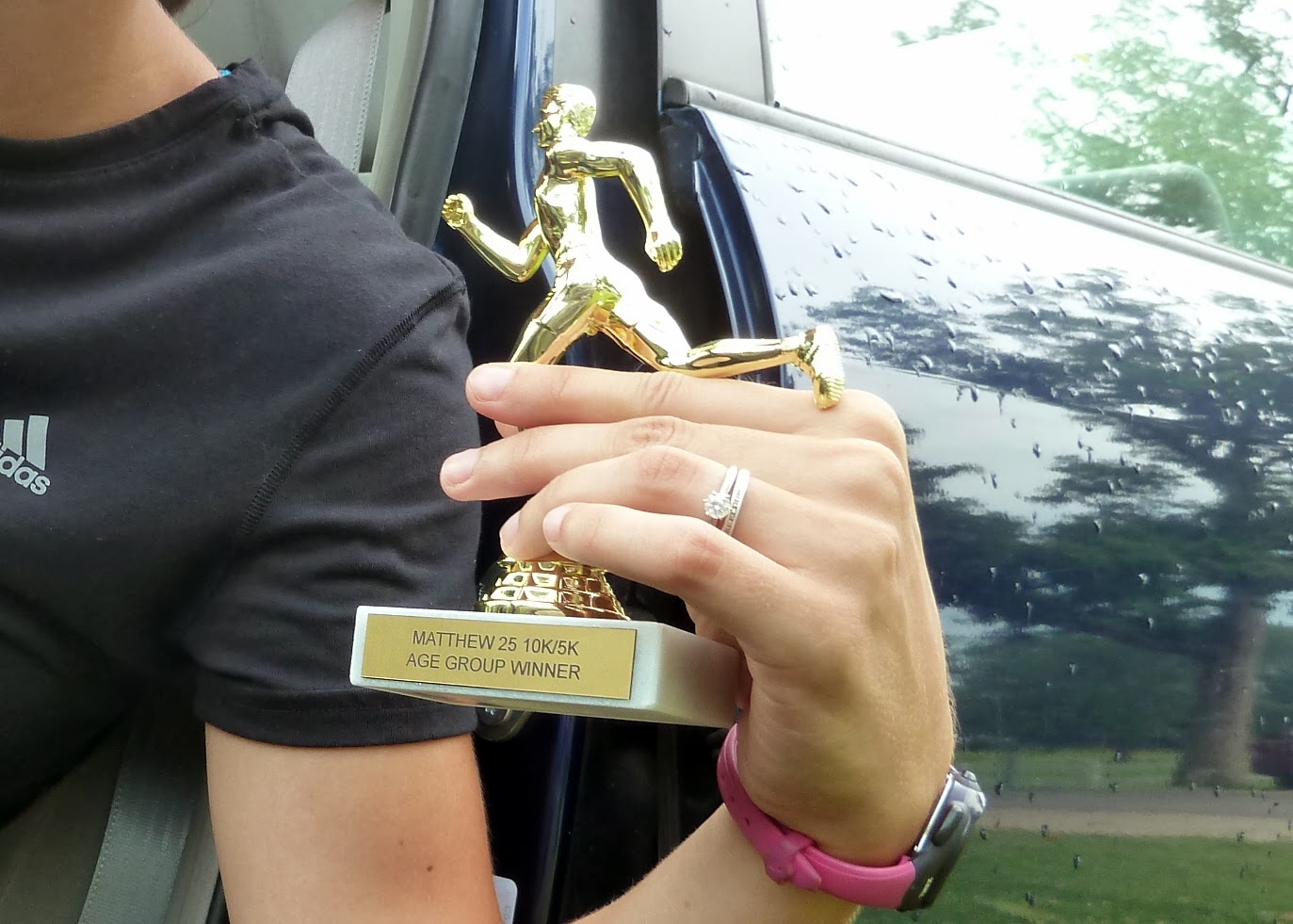