I decided to participate in this blog hop since I'd been planning on making some yummy goodies anyway! Click the picture to see what everyone else made, and maybe link up your own!  She promised to keep it open for the whole month, too.

I don't usually do a ton of holiday baking -- it's about on par with the amount I do the rest of the year.  I guess that means I don't get invited to enough parties?

Anyway, I wanted to try something that my friend back in Virginia had made for me before.  So I sent her a message through Facebook that read:


So the past 2 years you did some holiday baking, and I was a lucky recipient of some of it!   And there was one thing that stuck out to me, and I can hardly remember it, but I want to try to make it this year.  I think it was some type of chocolate and peanut butter creation, because that is usually my favorite.  It might've been caramel though.  I remember eating some on our plane ride last year, and then after we got to Indiana, one of the dogs got into my stuff and ate some of it and I had to throw the bag away. Not sure if I told you about that, but I was really sad!!

And I was really sad.  Especially because those dogs are usually very well-behaved for, well, dogs.

Anyway, my friend responded in a timely manner with the easiest recipe ever.  Actually, it's not even a recipe, it's more like an edible craft project.  Especially because they have no name.  I was gonna call them "cracker-doodles" because that's essentially how I name things, but I think the term "faux Tagalongs" is more accurate.  Tagalongs have been my favorite Girl Scout cookie for the past 20 years.  The first time I tasted that precious combination of peanut butter, chocolate, and cookie at the tender age of 6, I knew it was my manna from heaven*.  And I should know a thing or two about those cookies, since I stuck with Scouting all the way up.  (Actually, I'm a lifetime member now.  I have a card and everything.)

So here is how to make these wonderfully fake, no-baking required cracker-thingies.
You will need 3 ingredients.  Yes, only 3!  Club Crackers, peanut butter, and chocolate almond bark.  And leave your measuring cups in their happy homes, none needed today. 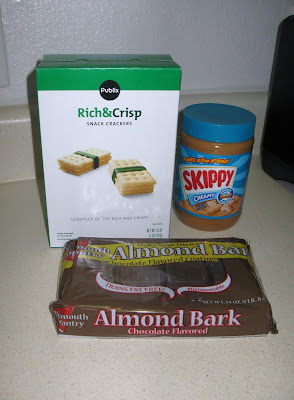 I cheaped out and got the store brand Club crackers.  But then the store didn't have the almond bark (it is a seasonal item, but I guess both Publix and Winn-Dixie forgot to order it this year), so I ended up at Wal-Mart anyway where real Club crackers were the same price as the Publix brand ones.  Sigh.

After your wild goose-chase for the ingredients, the fun begins.  Spread (however generously) peanut butter between the crackers to make sandwiches.


Then stick them in the freezer for 20-30 minutes to firm them up.

Meanwhile, start melting down that almond bark.  There's directions on the back of the package for microwave, oven, and stove-top.  I chose stove.

This was my first time ever using almond bark, but it behaved like most chocolate.  And by that I mean, she sure is a fickle mistress when it comes to temperature.  At one point, it started seizing up on me, and I didn't think it was ever going to be smooth.  But I gave it some encouraging words, a few stirs, and maybe a 10 degree temperature change, and we worked it out.  It never really got perfectly smooth, however.

Now comes the mess part of trying to figure out how to dip these suckers in the pool without getting it all over the kitchen.  If I had been paying more attention, I probably would've used a fork.  Dip them in, get them coated, then put them on wax paper (or parchment paper, in my case) to cool for about an hour.


After about an hour or so, they will cool down.  You can tell because they won't be as shiny.  Aaaand, that's it!  Time to eat! 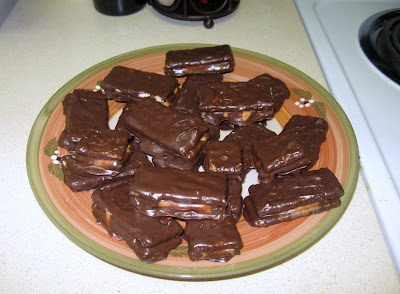 I could probably eat these every day for the rest of my life with no complaints!

*Please don't confuse my hyperbole with sacrilege.  A year later, I received First Eucharist, and it has trumped any cookie ever since.