There are some dumb people in Florida.  And I keep seeing them everywhere.  Ugh.  But this statute, adopted in the year 2000, makes their foolishness legal:


Florida Statute 316.211 (b):
Notwithstanding subsection (1), a person over 21 years of age may operate or ride upon a motorcycle without wearing protective headgear securely fastened upon his or her head if such person is covered by an insurance policy providing for at least $10,000 in medical benefits for injuries incurred as a result of a crash while operating or riding on a motorcycle. 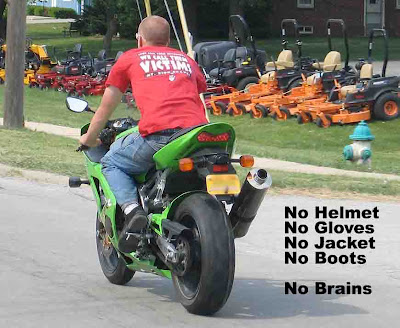 I've been doing some research on helmet laws, and apparently less than half of the states in the USA have helmet laws covering all riders.  I must have been living in the smart states. Wait... what?!   Look at this insane map:

So that means a 17-year-old punk can ride his crotch rocket through the streets of Chicago with no helmet?  I find something seriously WRONG with that.

The only state I've ever ridden on a motorcycle was in Georgia, so I was always handed an extra helmet.  B got his Indiana motorcycle license since his dad owns a Harley, but even he didn't know that there was limited law there.  He thought it was ridiculous when we started seeing riders here in Pensacola with nothing on their noggin.

These dumb motorcyclists freak me out.  I already get paranoid when driving behind or next to a motorcycle, and these idiots without helmets really make me cringe.  I refer to them as "organ donors," and I don't think I'm too far off.  Heck, I get mad when I see people riding BICYCLES without helmets (guess I was raised right, since it's technically illegal in GA if you're younger than 16).

The good thing around here is that the military members have to wear helmets (at least on base, but I think their CO would be TICKED if they didn't do it always).  And if they're in uniform, I've noticed that they usually wear those orange reflective vests at night.  Thank you for those, Uncle Sam.

What do you think?  Should all states have all-rider motorcycle helmet laws?  Or should bikers have a right to let the wind whip through their hair whenever they go for a spin?