Inspired by my friend Elizabeth (a.k.a. The Young Retiree) and my semi-Southern upbringing and current surroundings, I decided to try to make my own barbecue.  Now something Southerners know that the rest of the country doesn't understand is that barbecue is not an action.  And it is not a party. That is called a cookout.  Barbecue is pulled pork, usually on a sandwich.  I didn't grow up cooking, and my mom falls just a bit short of being a "real" Southerner, so I needed some help.

I read Elizabeth's post, which was pretty good, but I still thought I needed some 'professional' guidance.   A Google search brought me to this About.com video.   Okay, so it's not exactly a cooking site and that woman is a tad on the scary side, but it looked easy and I felt empowered!  And now to find a pork shoulder . . . commissary, to the rescue!

I pretty much followed the video to a T.  B thought it was pretty funny that I was starting dinner before he even left for work. 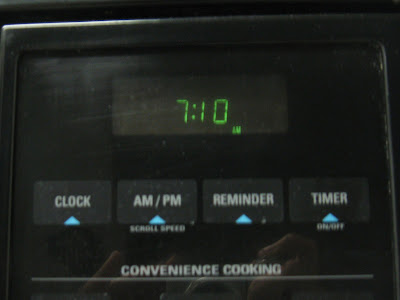 According to the video, I had to put it in on high for an hour, then knock it to low.  I used that lovely hour to catch up on some TV, thanks to my good friend Hulu. 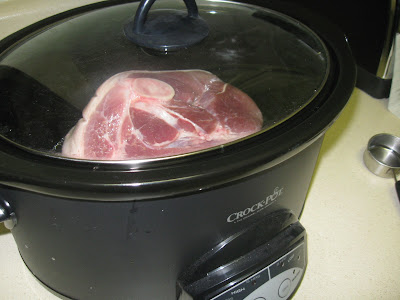 Now in Elizabeth's post, she cut the fat off the raw meat.  My little video didn't say anything about that, and I figured the fat would add some flavor(?), so I left it as is.  So easy!  And when we took the cooked piggy out, the fat just FELL OFF.  And the bones came right out too.  Slow cooking is awesome!

I did take one big peek because the thing was "popping" boiling and annoying me (and probably annoying the maintenance man fixing our sink that day as well).  I added 20 minutes, per the video -- thank God for formulas!  It's like putting the precision of baking into cooking.  Cooking requires WAY too many judgment calls for me to actually be good at it, so the more specific rules the better. 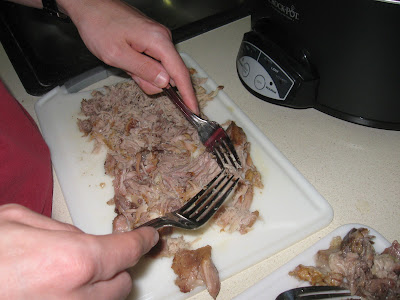 Around 6pm, I pulled the little piggy out.  It was way way too hot to use our hands to pull the pork, but two forks worked really well.  We each had a cutting board and just went for it.  If we were real Southerners, I would've had some other use for the broth/bones/fat, but pork soup sounds pretty nasty to me.  And we don't have dogs.  So we chucked it.

I love Sonny's BBQ, and I missed it dearly during our 3 years in Norfolk.  When I decided to make my own barbecue, I thought it would be good to use some of their sauce.  I added their "original" (mild) sauce to the pulled pork I put back in the cooker, then let it go for an hour while B worked out and I leisurely walked on the treadmill so I could watch my beloved "Jeopardy!" on the gym's TV.  I found some baked beans in our pantry to serve with this lovely meal and added a salad.  And of course the only drink of choice was beer (or hard cider in my case; I hate beer).  Each of us added a bit of Sonny's Sizzlin' Sweet sauce to the top for extra flavor. 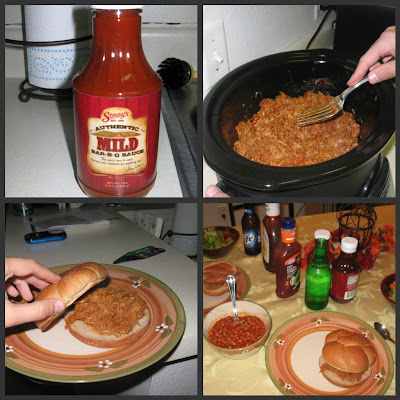 This made us dinner for two nights, and then lunch for the next few days.  We ended up going through the whole pack of buns, so the total servings came to about 8.  I love calculating just how much money we were saving because all the other times in my life I'd eaten barbecue, it was at a restaurant.

So, for what we would've paid for just ONE dinner (or slightly less than 2 lunches), including tax and tip, at a fine BBQ establishment, I was able to make 8 servings.  Frugality FTW!