Well, I got to cross another off the list. One that made it on the list because I had tried to do it a few times before and FAILED miserably. And then I tried some more, and FAILED some more. But then, the skies opened, I found a list of acronyms, and I successfully completed . . .

✔ 57. Go geocaching and actually find something

So a lot of people don't know what geocaching is.  It's basically just a big hide-and-seek game using GPS coordinates.  People hide these "caches" - usually boxes with random stuff inside all over.  The one I found was a "micro-cache."  It was basically a clear film canister (remember those?) with a long but tiny scroll of paper (the log) inside to sign your name.

I had been looking for some micro-caches around my previous home in Norfolk to pass the time during B's deployment.  There were a ton hidden all over where I usually walked, and I never found any!  It was really starting to bother me.  Especially the one hidden in the parking lot to the Opera that was right behind our complex.  I looked for that one at least four times, no joke.  But doing this alone with no experienced geocacher was just running on a hamster wheel.  There was obviously something I was missing.

Luckily, when I looked up the cache for today on the site, the hider had put an acronym there that I didn't know.  I found a good geocaching acronym site (good grief, these people use a ridiculous amount of acronyms!), and learned that many lamp posts have a "skirt" that hides the anchors but isn't secured so you can easily pick it up and hide things in there.  Why didn't I know this five months ago?!  Argh!

Here's a picture of me with my first find:

Unfortunately, that was the ONLY one we found today.  We tried to find some of the traditional caches, the ones in boxes with trinkets and fun stuff, and we FAILED.  Big time.  ("DNF" in cacher-lingo.)  We ended up at three different parks, all within a few miles of our place, so at least that was nice.  But we had to go off the beaten path to look for some of the stuff, and our legs seriously got scratched up (still shorts weather here on the Florida Panhandle!).  And my scratches even drew blood! 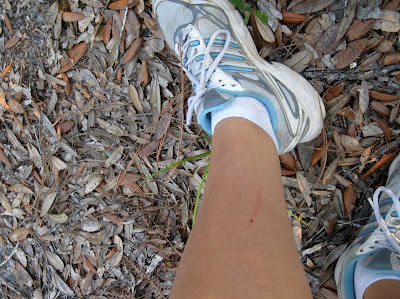 B has totally NOT been digging this "hobby" and whined about it pretty much the whole time we were out doing this together.  He told me I needed to stop this nonsense repeatedly, and that I shouldn't be encouraging people to hide trash in the woods*.  I'm starting to think he may be right, considering we didn't find SQUAT after the lamp-post one.  And that one we did find didn't even require our GPS--I just looked up the coordinates on Google maps and could pin down the parking lot and pretty much the exact little island with the lamp (it was a parking lot I was already familiar with).  And honestly,  it felt weird and exposed to be looking around for crap.  Someone even asked me what I lost when we were at one site.  I tried to explain the game to him, but since we hadn't ever found one, I didn't do a very good job explaining.

*This really isn't true, since most geocachers use a "cache in, trash out" policy and pick up trash along the way, helping to beautify the earth and all that good stuff.

The best part of the adventure is that this got us out to explore parts of our new home.  And to see interesting stuff like this: 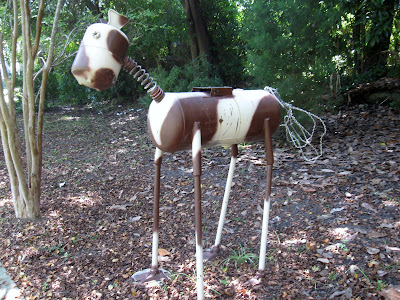 Along with some local beauty: 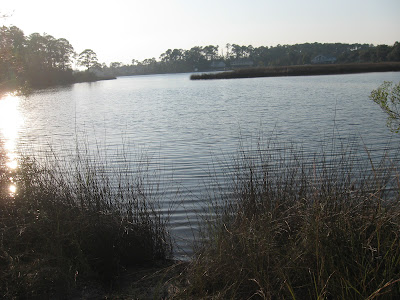 Overall, I just don't think we have the patience for geocaching.  Or I need to try it again with someone who knows what they're doing (not my whiny husband!).  But I got to put a big fat "check" on my 101 list, so that's something.