I have a favorite cookbook. It is a compilation of recipes given to me by family and friends at my bridal shower.  I am currently working my way through making every recipe in the book, and this one was submitted by both my mother-in-law and my Aunt Ann.  If two rather different people from rather different parts of the country both submitted it, then I guess I gotta try it! 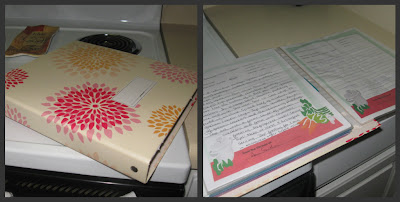 B saw the title, and immediately said, "My mom's never made an eclair in her life!" But then when I started getting the ingredients out, he questioned, "Oh, you're using graham crackers? I know that one." I guess he thought I was gonna make a REAL eclair, like this:

I have re-titled this to "faux chocolate eclair," just for his overly-literal engineer brain.
But anyway, here are the ingredients: 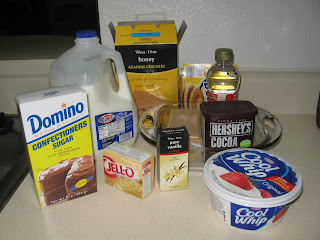 The first step is to put a layer of graham crackers on the bottom of your dish. Both recipes said to use a 9x13, but I decided to halve the recipe since I wasn't making this for an army/church potluck/hoard of teenage boys. An 8x8 would be fine for just me and B, although I did have to get slightly creative with my graham crackers.

The next step is to make the filling.  Both recipes called for instant pudding, but my MIL's said FRENCH Vanilla.  I'm in no position to go against the mother of my husband, so French Vanilla it is. Combine the pudding mix and milk to well, make pudding (sorta), then add the Cool Whip in.

If anything, the Cool Whip helped it from staying that mucky yellow color.  The next step is to make the chocolate topping.  My aunt's recipe just said to use a tub of prepared chocolate frosting.  My MIL's recipe was only slightly more difficult, so I went with that.  Because I'm still not about to ruffle the feathers of the grandmother of my future children.  Powedered sugar, white corn syrup, cocoa, vanilla, milk, melted butter.  It's kinda like making a runny chocolate frosting. 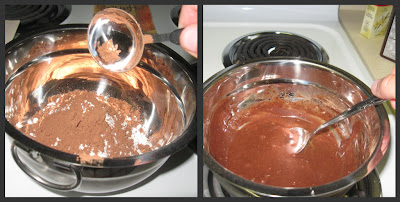 We only let it chill an hour because we wanted dessert.  But the topping hadn't hardened, and B called me out on it.  My aunt's recipe says to make this 8 hours before serving it, and she's probably right.  We ate some the night I made it, then put it back in the fridge.  Last night we ate more after dinner, and it was perfect.  Topping was hard and the graham crackers were soft.  And you know what?  It really DID taste like an eclair!  Just one you need a spoon to eat.

The full recipe now (not halved):