free is better than good, and then you grow up

We finally joined the new millennium and got a fancy TV that broadcasts HD.  It's one of those flat-screen numbers that almost every other member of the Navy blew their entire first paycheck on.  But not my husband, of course.  And I'm okay with that, because I am ridiculously frugal.  For the past few years (decade?) each of us (especially me) seemed to be living by my old AmeriCorps mantra of "Free is better than good."  And sometimes free stuff IS actually good, so the other mantra was "If it's free, it's for me!"  We applied these ideals to food, clothing, events, really anything.  I've been slowly progressing to actual adulthood and getting all these size-XXL t-shirts out of my dresser and into a donation bucket . . .

First, let me take a minute to mourn our old television, a free handout from another Navy wife (thank you!!).  The bunny ears were also free, as I got them at one of those white-elephant post-Christmas re-gifting parties.  Yes, I actually "stole" them from another person, and amazingly, no one else wanted them!  So they have followed me around for the past 4 years, from Jax, to Virginia Beach, to Norfolk, now to Pensacola, sometimes tucked back in the closet (when I worked for Cox Cable and got everything really cheap), but then sitting proper and pretty on top of the TV since B moved into his solo bachelor pad back in 2008. 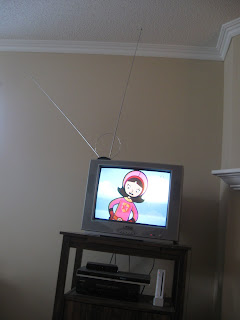 Oh grandma, what long ears you have!
Can I just tell you how much I loved the 2009 digital transition?  Yes, we had to buy this little box because the free TV wasn't compatible (government coupon FTW), but there's no "snow" any more, and a super clear picture!  Our old TV is now our guest room TV, so our visitors can enjoy all 10 channels that it picks up (less than Norfolk, but oh well).  In addition, we moved the VCR in there (also free), because B was embarrassed that we had one and didn't want it on display in our living room any more.  But it was way cheaper (did I mention it was FREE?!) than re-buying all my Disney videocassettes!  I'm not embarrassed one bit.

Even with the new television, we still refuse to pay for cable, so enter our new antenna.  Yes, we pull HD right out of the air, and it looks amazing!  Although this new antenna looks effing ridiculous, and we have the "ears" fully extended (we're a bit far from the towers -- they're all in Mobile).  We watched a few football games on our new TV this weekend, and I'm impressed!  Our one issue is that we don't pick up FOX, so I guess I'll have to watch "Glee" on Hulu (or just read the spoilers all my friends will post on Facebook).

Didn't George Jetson have one of these bad boys?
But after our little shopping spree where we bought some other big-sticker items, I was humbled once again by this Sunday's mass readings.  If you missed it, the ending was a nice reality-check of "You cannot serve both God and mammon" (Luke 16:13).  So I'm turning off the television for now and gonna go finish the book of Genesis.