What I Wore Sunday (LBD Edition)

I actually have two little black dresses. I have one for more formal occasions that I sadly haven't had an occasion to wear in probably 3 years now. And then I have this knit jersey one that's actually a maternity dress but has served me well on both sides of that fence.

[More showings and jabbering about my awesome LBD back in this post.] 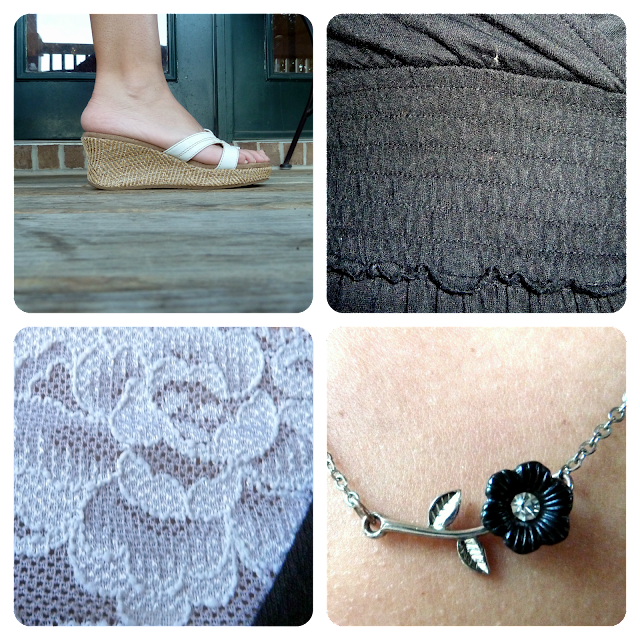 Yes, that lace cami is actually part of my bra! I had been wearing solely nursing bras for such a long time that I forgot what I actually had in my drawer. While this bra is definitely not for nursing, it's great for everything else! It was especially awesome in Florida where you tried to be modest but it was just too dang hot for more than one layer.
B is off on his monthly Drill weekend, so I did the solo-parenting in mass thing again at vigil last night. We actually went to a different church, since it's the one we'll probably be attending when we buy a house! (And that whole home-ownership thing is becoming more real every day.) I have found a system for dealing with a squawking toddler in mass now. I know some people won't agree with this, but it involves small snacks (mostly Cheerios), paced by me while she sits on my lap through the homily. Last night, it also involved her falling off the kneeler right before communion and a medium-sized meltdown. (I never found the cry room at the new church, but the narthex was fine.) We celebrated by going to Chick-Fil-A where Cora actually ate chicken and then got to play in their kids' area, which thankfully included an under-3 area. That's a pretty good night for us, even though Daddy wasn't here.
Labels: fashion