Catch up on when we started househunting (Take 1), if you want.

For the past month and a half, we have basically gone out about once a week with our Realtor and looked at houses. The first night we did this, we got some family members to watch Cora and we hit a whopping 7 houses. House #6 was darn NEAR PERFECT.

The house itself was almost exactly what we wanted--it even had an extra sun room off the kitchen and a wet bar in the basement! The lot was nice and included an awesome swingset. But it was on the 'main drag' of a busy neighborhood, and we had wanted a quiet cul-de-sac lot. It was also the very top of our (spoken aloud) budget. We hesitated to make an offer right away, since it was our first time out. We said we'd think about it over the weekend. Well, by noon the next day there was an offer on it, a sign in the yard that said "SOLD in less than 7 days!," and we had to just let it go. I've driven by that house a few times since then, and still kinda mourn it.
So we kept searching. We would usually see 2 or 3 houses after B got off work. We brought Cora along, and B chased her up the stairs or wherever as I explored. It really was me being the picky one. B had basically no requirements or even little extras that were important to him. (He mostly just wanted a house that was built within the last 20 years.) This was actually really frustrating to me, since I knew if I picked a dud it would be entirely my own fault.

I had a handful of things I wanted, and our realtor even took us to a builder to discuss custom-building a house. We decided that wasn't for us for a few reasons, mostly because of the time involved, the cost, and the fact that I didn't really want to live in the neighborhoods where homes were currently being built. I eventually even upped our budget, which I had not wanted to do, since I kept being shown things at the top of our budget that still needed a basement finished (can run about $20K to do this) or something expensive like that.

My parents were in town the week of July 4th, and I drove them around the part of town we were looking. My mom has custom-built TWO houses, which means she hasn't lived anywhere that previous owners held in over THIRTY YEARS. She kept telling me we should build, and I kept saying, "I'm not that picky!" Our Realtor did tell us there was a lack of inventory going on in the market right now, and I still believe that. I started looking in the opposite direction online, at 1970's-built homes that were wayyy under budget, but still looked decent. I never did get in any of those to really see them, but I know they would have required a lot of work to configure into what I really wanted.

A few days after my parents left, I was looking online again, and I saw a house that looked promising. But then I noticed one of the things I seriously did not want in a house.

I had been hesitant to have a main-floor master bedroom with all of the other bedrooms upstairs, mostly because we're still on kid #1. I eventually had to let that go, since a ton of the homes here have that. But the master facing the street? Hrmph.

I asked our Realtor if we could see this other house, and while on the phone, he mentioned the one that had prompted my raging tweets. I told him I didn't want to see it because of the master-facing-the-street issue, and we moved on with the conversation. But then some strange feeling hit me later that day, and I emailed him and asked to see it too. Just to cover my bases, I guess. I'm pretty sure my actual email made me sound like a 15-year-old. Plus, it was $15K under our original budget.

After seeing two other houses I didn't like very much, I ended up liking that house a lot. The house I didn't even want to see originally. Except that it needed a bathroom added to the basement and a complete overhaul of the master bathroom (it has carpet and a hideous tub.) However, it was the first time I had gone out to look at houses during the day while B was at work. I was having trouble chasing Cora around, as it was really hot out and my stomach wasn't feeling too good for whatever reason. The owners of this house were out of town, and had left their thermostat set to 81° so it was sweltering inside the house, too. I decided to ask if I could come back with B that night to see it again. Our Realtor brought along a purchase agreement to the showing that evening. We knew we had to move fast, too, after losing that last one so quickly.

To make a short story long, we came back, looked at it again, and even got to talk to a neighbor. We made a full-price offer on the house while Cora ran around on the sidewalk. 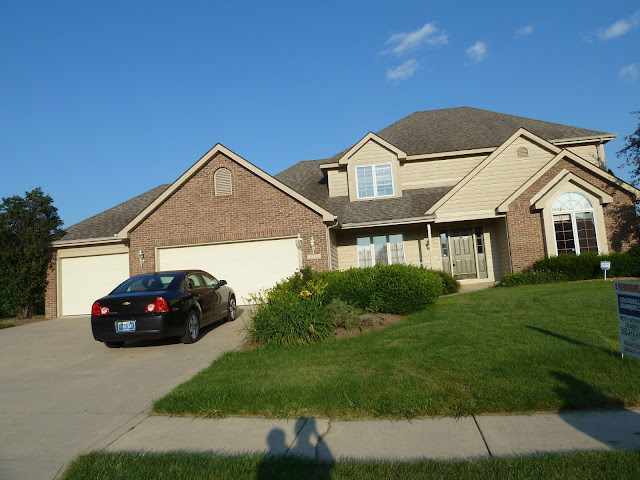 Unfortunately, the story doesn't end there. I woke up the next morning with a heaping dose of buyer's remorse, thinking how much I might hate this house, and how it just isn't perfect. I kept thinking that my actual perfect house was going to come on the market in the next day, now that we had made an offer. I called B in tears. I seriously considered pulling the offer, and I was feeling that we rushed into it all too quickly. I almost felt like I did it just to spite my mom's insistence that we custom-build. B listened to me whine and then told me to get out of the house and go do something else! He also told me we needed to get some bikes for that 3-car garage. I took Cora to the library for story time, and by the time we got back, I was feeling much better. I started seeing all the possibilities with the house, and I looked at some of the pictures again. I even mustered up the courage to call my mom and say, "Hey, we bought a house." 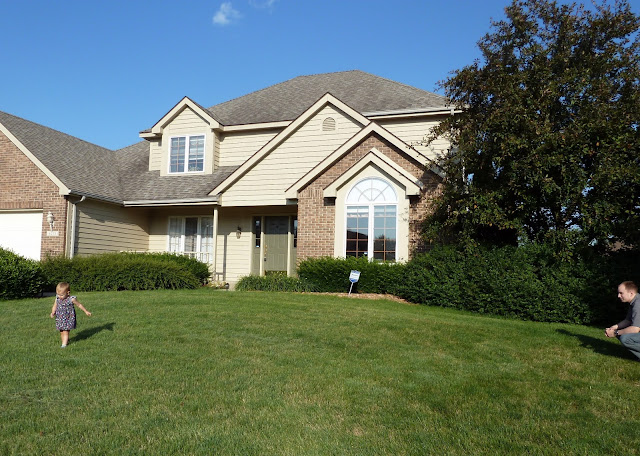 I still don't understand the point of the master bedroom facing the street, other than the front of the house needs a pretty window. (And the only room upstairs that got a pretty window is the one facing the street as well.) But the rest of the house is a blank canvas for us to make into a home. And it does have a lot of great features, like the island in the kitchen, an adorable dining room, an herb garden, and a big basement to fill with kids and their toys. Now, a week later, with this week mostly focused on getting our financing in order, I am officially excited about our new home!
Labels: househuting