What I Wore Sunday and a Race Recap

I ran a 5K yesterday morning, and then we packed up a few things and headed north to my in-laws' lakehouse in Michigan. My husband had his first days off in over a month, so I'm glad he got to relax on the lake. I finally got to attempt waterskiing, and I never made it up out of the water. But then I sorta knee-boarded. Baby steps over here . . .

Instead of going to our usual vigil mass, we got to go to a 9am service. I love the 9am service because apparently Cora is kinda sleepy then and just kinda chilled out in her grandmother's arms through about 90% of mass (but didn't fall asleep).

And I wore something "beachy" (lake-y?), at least in my opinion. 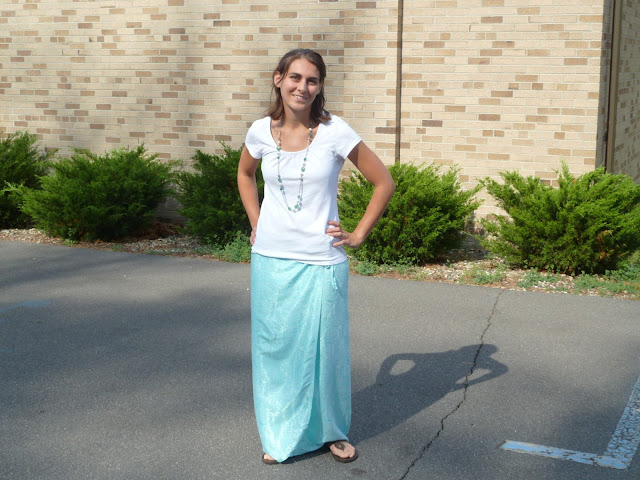 I wore a long skirt to see if it gave me "airflow" like everyone who wears maxi dresses says those things do. Yeah, nope. I was hot and immediately changed into khaki shorts the second we got back. Whenever I'm hot, my first instinct is to just peel off as many clothes as possible, so I don't think maxi dresses are for me. But this was a wraparound skirt, not a maxi, so maybe I'm wrong?

As for the 5K I did yesterday, it was my first 5K in over 2 years (I did a 4K back in June). Since B had the day off, he stayed home with Cora and I went to the race all by myself. I ended up using that hidden pocket on my shorts for my car keys, and it worked pretty well!

The run itself was good. It was kinda drizzling out when we started, and it was super humid. I think that threw a few people off, but I have been training in really high humidity (running at about the same time the race started). I felt good the whole time (no cramping and didn't gun it too hard at the start) and had a good pace. I had a goal time in mind, and I knew I was going faster than it. Since I started running again, I have had this other goal time, a really lofty one. I was starting to think I might actually hit that one. But I did not.

But the best part? 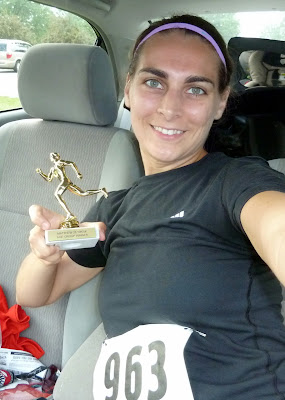 I won my age group!! I seriously couldn't believe it! My overall place was about 38th. I guess you just gotta find the smaller events (I'm guessing there were about 112 runners total for the 5K) and be a 25-29 female in this town! There were only 5 other girls in my age group. 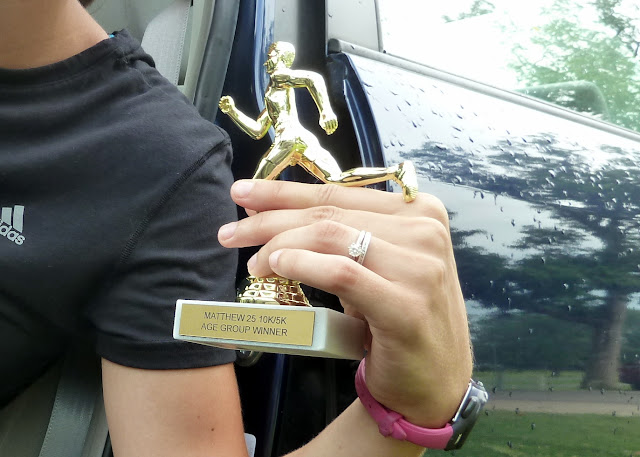 I posted this on FB right before we left for the lake. Didn't have internet all weekend and came back to 48 Likes on my status. I didn't even know I had that many friends!
Labels: exercise, fashion, running