Throughout this past month, I have been reflecting on my first postpartum month. To be honest with you, it was hell. From a long hospital stay--I went into labor on a Wednesday and didn't leave until Sunday--to issues with my postpartum care nurses and lactation 'help,' it didn't start off so great.  I couldn't stand up for more than 5 minutes at a time without wetting myself those first few weeks, and I had a hard time envisioning the day I could run a mile again. I also didn't fall madly in love with my baby right away, and often I thought other people were more excited about her than I would ever be. It's a hard road to walk when multiple voices are telling you to "Enjoy every moment!" but you find yourself hardly enjoying any of them. In fact, those first few nights home, I sobbed myself to sleep, enveloped in a combination of crazy hormones, fear of SIDS, and general "what the heck have we done? my whole life has changed overnight!" pangs.

But a year ago today was a turning point. We had been having breastfeeding issues. Cora had regained her birth weight at 3 weeks (yes, late) and then lost weight on the next check at 4 weeks. I was annoyed with the way the Family Practice doctor I got stuck with at the Naval Hospital was treating us (he was not lactation-friendly), and I had been trying to switch to a real Pediatrician. The corpsmen in Family Practice were not consistent in their practices, sometimes weighing her with diaper on, sometimes off. After the weight issue, I finally got to see the Lactation Consultant down in the Pediatric office, who was very reassuring and gave me some great advice on increasing supply. It involved some Fenugreek and losing a lot of sleep to basically pump and nurse my supply up. Those tips were great, but they also caused a small side effect: I was going insane, mostly from the lack of sleep. And to be honest, my husband was not very supportive of me continuing to do something that made me so miserable. I cried. A lot.

And then last year, on Sunday, February 26th, I sat in church and made a decision. It was the first Sunday of Lent, and we sat all they way in the back of the church (even though we're usually front-church people) because I didn't want to draw attention to my nursing baby. I wasn't actually afraid of nursing in public, but I was just ashamed that I wasn't doing it 'properly.' (I had to fix my baby's latch every time and also was doing compressions because, hey, that's what was sort of working.) I was starting to nod off due to exhaustion as the priest was giving the usual "Pick a Lenten Sacrifice" homily, but I was awake enough to follow some of it. I somehow got a jolt of energy, and right then and there I decided something. I decided I would stick this nursing thing out until Easter. If I was still in tears every other day on Easter, I would give it up. I remember having so much clarity at the precise moment of that decision.

Since I was emotionally a wreck that day, my baby's one-month milestone was forgotten. I actually don't have a single picture of her from that entire week. That is also the reason why the elephant-chair pictures don't start until 2 months. I truly regret letting that happen.

If I could go back in time and change a few things about that first month, I would. But what's done is done, and I'm not going to dwell on it right now. Some good things did come out of it, though. My labor and delivery were not disappointing to me at all, since I met my goal of avoiding the C-section (even though that meant 3 hours of pushing). The extra day in the hospital presented me with a nurse who helped me with breastfeeding more than she could ever know (she sat me in a chair! we used my nursing pillow! the baby latched!). Changing doctors showed me that I really do know how to stick up for myself and my baby.  I learned how a lack of sleep can affect me emotionally and how I turn into a train wreck when it happens. (I got screened by two different counselors for PPD, and I wasn't diagnosed with it, as it all just hinged on a lack of sleep.) We plan on having at least one more baby, and there are many things I will know going into it that will hopefully help me.

As for the breastfeeding, it obviously got better. My supply leveled out before Easter of last year, and I think I was even off the Fenugreek by that time.  Currently, I still breastfeed Cora twice a day (at waking and right before she gets in her pajamas), and those are some of my favorite times. I had a 4-week weaning plan that I threw out the window last week.

I also have truly fallen in love with my baby over the last 13 months.  She lights up my world with her laughter, and I could listen to her babbling all day without tiring of it. My baby has brought so much joy to our household, and I think I fall in love with her each day over and over again.

Whenever I hear new moms having a hard time (and those first months are very hard times), all I can say is . . . it gets better. 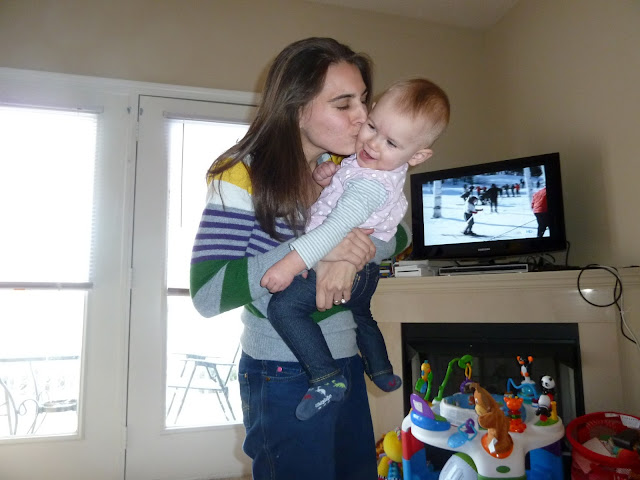