--- 1 ---
Happy Lent everyone! Oh, and was there some lovey-dovey Hallmark holiday yesterday? There might have been . . . sure couldn't tell in our house though.


--- 2 ---
That's a lie. Sort of. Cora and I gave B a card and some gummi bears, and we picked up a pizza for dinner. She wore a cute "Daddy's Little Sweetheart" shirt. In return, we got . . . nothin'.  I'm not kidding. B said we'll get something some time this weekend. Who is the overly frugal one in this house again? (Okay okay, he did say he's taking us to a basketball game at the local college tomorrow, and I told him I wouldn't mind some half-price flowers.) This is one of the first years that one of us wasn't either sick or absent for this day, so we don't have any standing traditions. 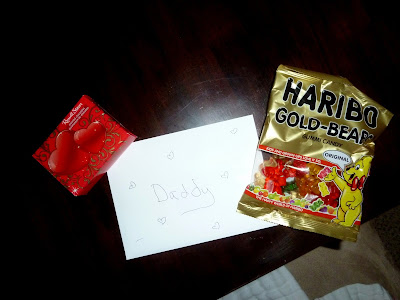 --- 3 ---
I figure now is a good time to make a formal declaration of my Lenten sacrifice. I am giving up the computer on Wednesdays. I can check stuff on my Kindle (hey, sometimes I need a recipe!), but no computer. I'm trying to read all of the books of the Bible I've never read before during that time. Or, y'know, clean the house, watch a movie, become an official Indiana resident, or do something other than fritter away my time in a distracted way with 20 tabs open simultaneously.

On Ash Wednesday, I read two chapters of Joshua (could. not. focus.), a few chapters of some other book, and watched the Disney version of The Hunchback of Notre Dame (hadn't seen it before). We also made it to mass!

B and I also joined a small faith community (that only meets for Lent) through our church. We'll see how this goes. I married a true military man who loathes "talking about his feelings," so I had to convince him to do this. It's his Lenten sacrifice, officially.


--- 4 ---
I started weaning Cora two weeks ago. It's going well. We're down to nursing twice a day (morning and evening), with a sippy cup of milk at lunch and a little bit as an afternoon snack. I was planning to have her fully weaned by 13 months, but now I think I'm going to hang on to the morning nursing session for kicks and giggles . . . so all you toddler-nursing lactivists can drop the pitchforks already. Maybe we'll drop it at 15 months or so.

I had never really taken a picture of us nursing, but I want to remember it so I asked B to take one the other day. 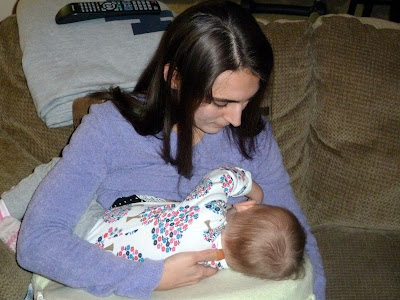 Yes, yes, I still use the My Brest Friend pillow my sister gave me. That thing is the bomb dot com (do people still say that? guess so since I just did). Our couch is overly squishy with no support, so it helps a lot. It also fits in the glider really well so she doesn't bash her head on the wooden part of the armrest.


--- 5 ---
B thought it was odd I wanted a nursing picture. I retorted, "I've done this every day for the past year and have no picture of it!" He gave me a look that, without words, said, "Um, you've brushed your teeth and taken a shower every day for the past year and didn't take a picture." Since I knew what his look meant, I then said the words aloud. And he laughed.


--- 6 ---
Speaking of B, he has been addicted to "Harlem Shake" videos for over a week now. He officially introduced me to them two days before I started seeing them everywhere. Even Kelly & Michael did it on their show on Tuesday!  I'm not a big fan of the original video because it's just weird. But I love this one from my college's Swim & Dive team!