preparations for a quiet Christmas at home

We've been doing a little preparation for Christmas, but to be honest, it's nothing major even though we're "stuck" here and no one's coming to visit.  My mom mailed us our stockings and I put up a little display on the bar.

One idea that I got this year was to hang up the cards we've been getting from others, and I really like how easy it was and how it looks!  I just used some twine, tape, and paperclips--all things from around the house!
And what about that hideous tree I have on the bar?  I "won" it in a Dirty Santa exchange and have decided to make the best of it.  It will probably be going in the trash eventually, however.  At least the gift also came with a $10 gift card to Cracker Barrel (along with an expired coupon for free hashbrowns at Waffle House.)
We also decided to drive across the street to the U-Cut tree farm and cut down a tree!  I've never done that before, and I definitely thought it was a more "northern" thing.  Who would've thought we'd have one around the corner here in FL?  It took some convincing on my part, but it was only $30 and we scoped out the trees in advance on a walk to make sure they weren't too big for our apartment.  Most were sand pines with skinny trunks, so they were fine.  We got one and threw it in the the trunk of B's Buick Century.  We didn't even tie the thing down since we weren't going too far.  I say that I did most of the hard work--yes, B handed me the saw and said, "This was your idea, here ya go."  Yeah, I married a total Grinch.
I went to Wal-Mart and decided to "splurge" and get a pretty tree-topper.  That didn't pan out for us, unfortunately.
So I returned the pretty topper for a 97¢ bow with a twist-tie on the back.
Also, here's our awesome Christmas card for this year. 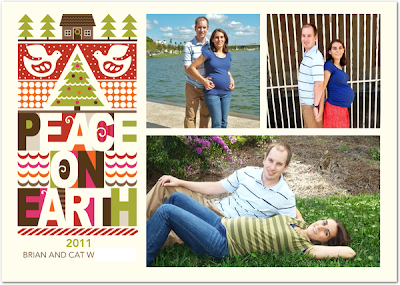 The back was my favorite part! 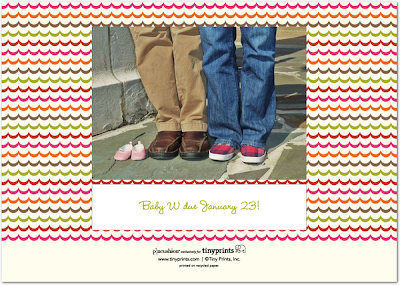 Okay, to tell the truth we had more than one set of cards because I won 50 free cards from Tiny Prints (the ones above), but their price per card was just too high to buy the extras I needed from there.  (For the others, I found an amazing deal at cardstore.com that included postage and will definitely be using them more in the future if they run stuff like that again!  I actually paid less than the price of the stamp per card, honestly, and the cards came out pretty nice too.)

Check back tomorrow for some holiday tunes and to see what I got from my milspouse secret santa blog swap!
Labels: decorating, holidays