a movie from the year i was born

I know I've mentioned this before, but my latest Friday ritual is to peruse the movies at the library.  I'll point you to all the other posts about me "not being a movie person" to see why I go the free route instead of wasting my money on movies.  But that is also why I added so many movie tasks to my 101 list.  I have some serious catching up to do here. 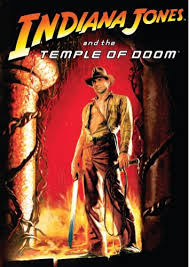 Case in point: finding a movie from the year I was born.  I'd already seen Ghostbusters, The Karate Kid, Amadeus, and whichever John Hughes teen flick was released that year.  In hindsight, I should've picked Footloose, since I'm pretty sure I've never seen it.  But Indiana Jones and the Temple of Doom was there at my fingertips and it had the correct copyright date on the DVD case.  Maybe it was fate, maybe it was just convenience, but at age 26 years, 5 months, and 20 days, I decided to watch my very first Indiana Jones movie.

I know, I know.  Isn't that the worst one?  How could I start my Indiana Jones-ing in the middle?  And how could I have gone my whole life without seeing Harrison Ford ride in a mine cart when I even have extended family that named their dog Indy after this character?  (Sorry, family!)  Well, rest assured that I have indeed seen the Indiana Jones Epic Stunt Spectacular at Disney World.  That's an acceptable consolation, right?

And after handing over two hours of my life watching this movie, I'd much rather have the 30-minute stunt show.  This movie obviously didn't win any awards for cultural sensitivities or women's empowerment.  Or plot.  But according to the description on the box, it "brings non-stop thrills and excitement."  I will give it that.  Maybe I haven't watched enough action movies, or maybe they've changed over my lifetime, but this was seriously the most constant action I've seen in a movie.  Also, watching a movie from 26 years ago shows just how far technology has come.  There were shots that I couldn't help but laughing at because it was just so obviously green-screened.

Overall, the movie was decent, which is sort of a compliment coming from me.  I wouldn't mind following up with Raiders of the Lost Ark (it could help fulfill #74), as long as it doesn't have all the nasty creepy crawly critters that took up a good half of this movie.  Yuck.