I'll admit, I had a few opportunities to go to air shows in Virginia, but I never did.  I hated hearing the jets there near Oceana.  They were SO LOUD.  And they would pass over at all hours of the day and night, luckily only in the eastern half of Virginia Beach--interrupting my beach time but luckily not my sleep.  I didn't grow up in a military household or anywhere near a base, and I also didn't marry a pilot.  All that being said, I didn't know the difference between a F-16 and a B-52 (still don't, by the way).  Nor did I really care (also still kinda don't).

We now have the good fortune to be living in "the cradle of Naval Aviation" and "the home of the Blue Angels."  Which means that I see these special planes (jets?) flying over a few times a week and occasionally see a loop-de-loop over my head while driving to the gym.  The locals here love "the Blues," as they call them.  On any given week during air show season, you can go to the museum on base and watch a practice and get some autographs from the pilots afterward.  Really, that's all these pilots do, since the full name of the command is the Navy Flight Demonstration Squadron.  It's a "multi-million dollar recruiting tool," according to B.

Every year, the Blue Angels end their air show season with a grand finale Homecoming Air Show here in Pensacola before they pack it up to train their newbies in California during the winter.  This is THE EVENT around here.  Jax has GA/FL weekend, Norfolk has HarborFest, Pensacola has the Homecoming Show.  Three days worth of it, too!  Even the base gym was closed for it, so I'm guessing it was a big deal.

I decided that the Saturday show would be best for us to attend, but we did get to watch the Blues all three days anyway.  The first day of the show was Thursday, when we trucked over to Fort Pickens (free admission for Veterans Day!) on Pensacola Beach.  It was neat watching them from afar while exploring the old fort. 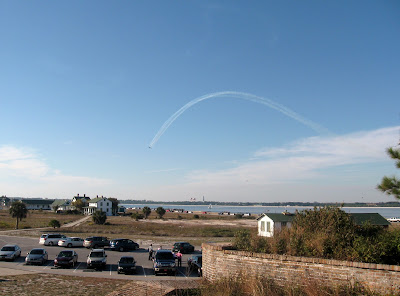 The second day of the show, it was so loud over our apartment that we just had to go outside and watch it.  Here's a video B took near the mailboxes while I comment on the mail we received.


And then on Saturday, we went to the main event!  There were so many acts, and most of them weren't loud at all!  That very much surprised me, considering they were selling earplugs.  I took a gabillion pictures, and B had his handy flip-cam out for videos of most of them.

For brevity's sake, I give you my 3 favorite pictures and my favorite video.


And now for a video:


To see more videos, check out all the ones on B's youtube site.

Also, I just want to mention that the Commanding Officer of the Blue Angels from this year (guy in the #1 plane at the front of the diamond, a Captain in the Navy) is now working at B's command (Deputy Director/B's boss's boss[?]).  While watching him fly, all I could think is how BORED he's gonna be now at a paper-pushing office after doing this crazy air show stuff all the time!