This past Saturday, I did my 2nd race of the year, the Frontier Run n' Fun. There was both a 10K and a 5K option that started at the same time. I chose the 5K.

B was out of town for the weekend, so I got his aunt and uncle to come and wrangle the toddler. After seeing it would be kinda cold in the morning, his aunt called me up the night before and asked if I just wanted to drop Cora off at their house. I declined and convinced them to come. I knew it would be in the 40's and that's not too cold for Cora, and goshdarnit, I didn't want to go do a race by myself again! I didn't tell them that last part, but I knew Cora would wear out her batteries faster running around outside. Plus, I heard there would be a bouncy-house.

Anyway, it was a well-done race with decent course markings since both races were on the same route for the first 3 miles. At the start line, a guy tried to tell us about something that was in our race packet that looked kinda like a shoe chip (it was bib-chipped, and that thing was just a trinket), but NO ONE could hear him (no megaphone or anything).
I started out WAY too fast because I was fiddling with my mp3 player. Next time I need to remember to take my setting off 'random' before the race. Sigh. I have been doing speedwork about once a week since March, and I have been doing longer runs lately. I also timed myself for just a one-mile run (7:40) to see my potential. My goal for this race was under 27 minutes. My ultimate goal is to get under 25 minutes on a 5K. I have also been able to ditch the knee brace! So far, it's been going okay without it.
The course was interesting--it was road, sidewalk, then some gravel trail with giant puddles to dodge, then a mowed path through grass, and a small uphill. We don't have a lot of hills here in Indiana, so that hill was rough! There was no marking for mile 1, but I looked at my watch at mile marker 2 and saw that I was under 17 minutes. That's fast for me! The second mile of this race was probably the first time I've ever consciously told myself to go faster during a race. Apparently it worked.
I finished proudly with a new PR of 26:14.

Our bibs also got us some lunch and beer. I gave the beer to B's uncle and chowed down the sandwich myself. B's aunt and uncle left shortly after, and I waited around for results since I had a hunch.

I won a plaque and a $20 gift card to the running store. I need new shoes, so that will help a bit! 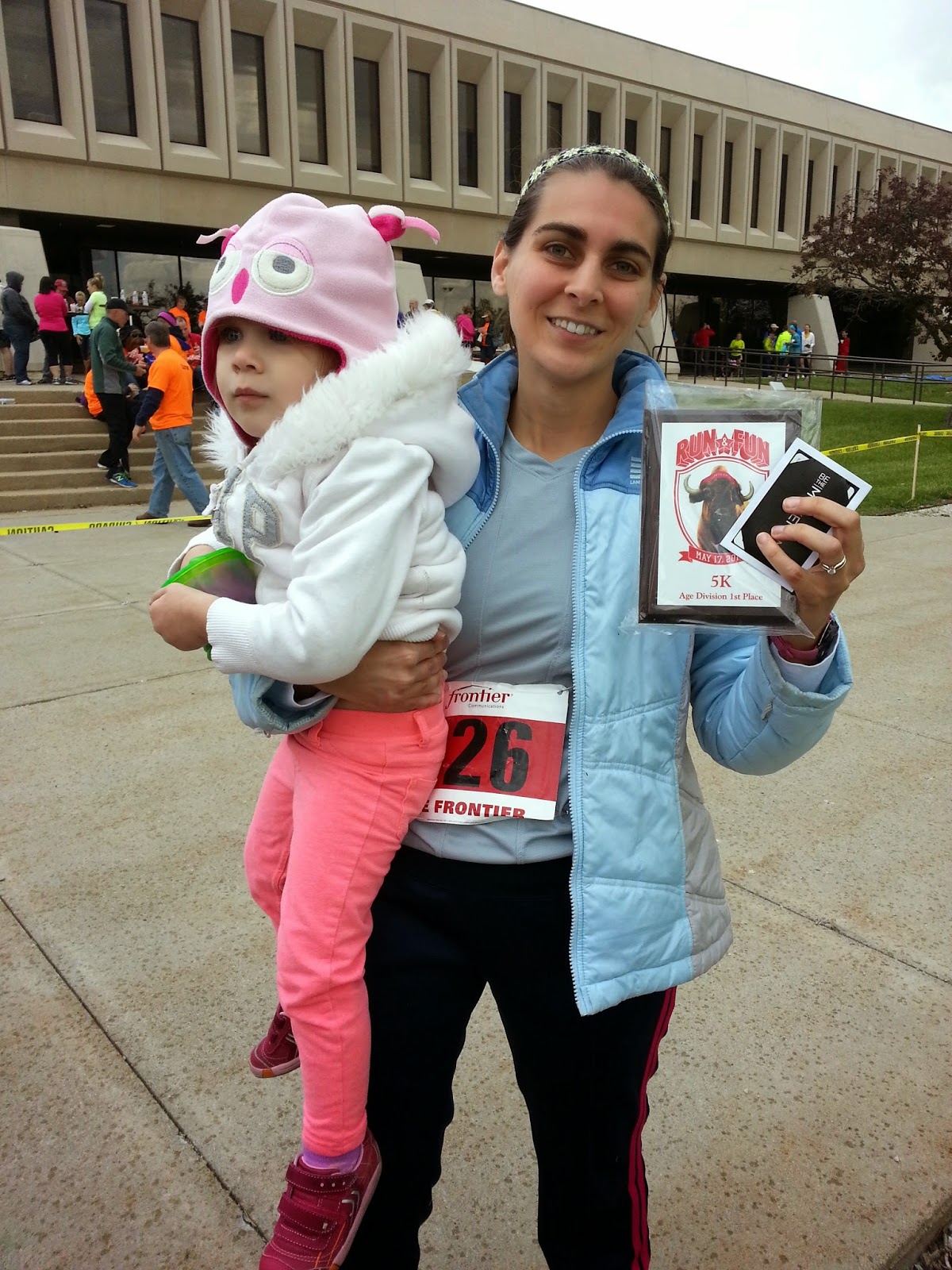 I found I really liked doing the 5K so I could watch the first place 10K finisher come in. I usually never get to see the 1st-place finishers at races, so that was really neat for me (especially after B's "chased by a dinosaur" comment from the last race). I'm doing another 5K/10K combined next week, so I'll be sure to cheer on the top finishers.
This was a great race, and between the lunch and the prize money, I basically made back my entry fee. I'll be doing this one again!
Labels: running