All but one day in skirts again. Well, that's sort of a lie. I'll get to that in a bit.


Monday, I took Cora carpet shopping. I wanted to be taken seriously, and it was a bit cooler that morning. Hence, the one long skirt I own. 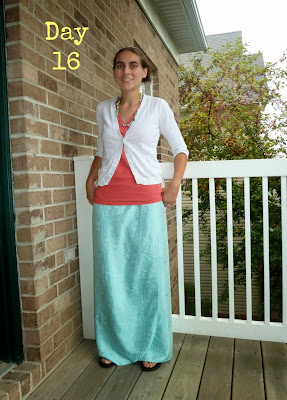 I am sooo glad I found that white cardigan again. I thought I'd lost it forever, but it turned out to be tucked way behind a bunch of winter clothes. I really love this outfit! (And my aunt made that necklace.)

I seriously don't remember anything about Tuesday other than the re-debut of my riding boots. 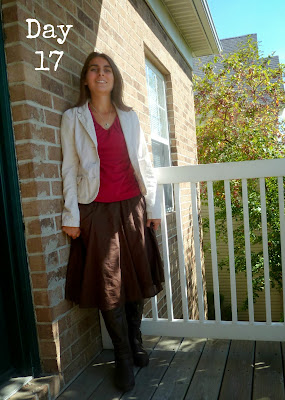 Warmed up a bit on Wednesday.  Cora wanted to be in the picture, too. 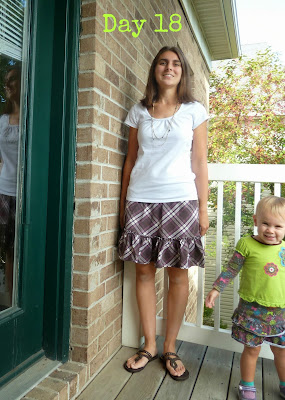 Missed Thursday completely. I probably had reasons, probably involving working at the new house, in which I'd rather wear old basketball shorts or painting pants.

Friday, I took Cora to the library for story time. I was a bit overdressed, but I didn't care one bit. I also had forgotten that they didn't have story time this week for whatever reason, so she just got to play in their children's area (which is an amazing place) and look at the fish tanks. 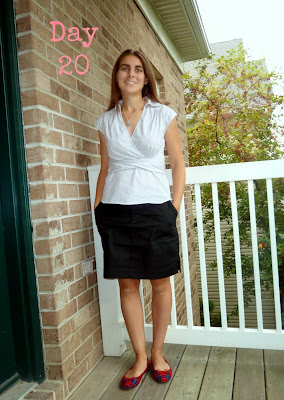 We did some shopping on Saturday and went to vigil church. Yes, I wore this to church. 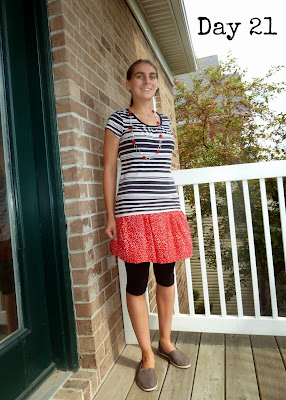 I don't think the alpargatas worked so hot in this one, but I gave it a shot. At the end of the day I remembered how uncomfortable leggings get after a while.

On Sunday morning, I put on the brown skirt from Day 17, but got cold before we even left for the park. I nixed leggings and opted for jeans. Later in the day, we went to the church picnic, and I stayed in the jeans. I actually got hot and wished I had been wearing a skirt! Oh, autumn, you are a fickle one. I changed into this church after getting home and still being hot. 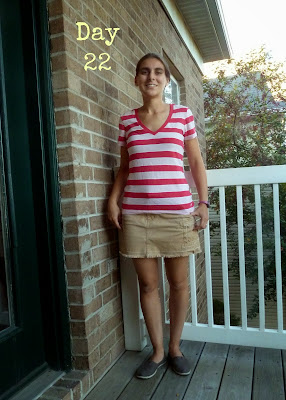 I don't like the way the button protrudes on the skirt, and the skirt also likes to move around me a bit much--as in, the front seam ends up over on my hip and the whole thing is sideways. You can see it creeping in the picture. I think this one might be ready for the donation pile. (I've had it since college.)

Overall, I did okay this week. I'm having fun with it, and I haven't even used all the skirts and dresses in my closet (some are more on the formal side). It's this next week I'm fearing, though. The mornings now are hovering in the 40's, and the afternoons are sunny and nice. Since I get dressed in the morning, I seriously don't even know what to do since I get cold easily. I also need to be adjusting my lungs to the cold so I can run a 4-mile race on Saturday morning. I miss the South already!! If you'd like to hear more on just how much I hate winter, here is a post I wrote back in April when it snowed. Again.

Maybe next year we could do this in June or July? Skune? Skuly? (We'll work on the name.)
Labels: fashion