Another month, another race!

Although this one wasn't technically a race. It wasn't timed, so it was just a 5K. I was actually really annoyed when I found out it wasn't timed! I guess I'm a "serious" runner, after all. I made sure to wear my watch, even though I had to wash it off pretty well later.

I've never done one of these "funky" 5K's, so I had no idea what to expect. I also was bummed that I don't really have any friends here, and this seems like the kind of thing you should do with a friend. I convinced B and Cora to come and cheer me on, after the lameness of winning my age group in the last race and having to take a selfie of me and my trophy. We drove up as the first wave was starting in the distance. My first impression? "Looks like a Klan rally." Yes, I said that aloud. (Not like I've ever been to one, but c'mon, everyone was in white. I even saw a big group wearing white bandannas over their mouths.) 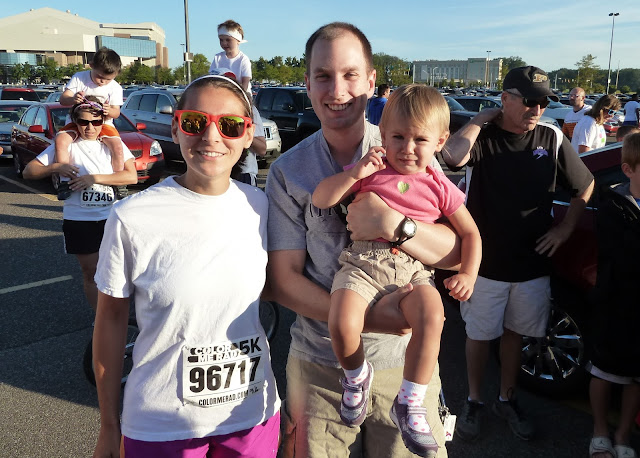 It was nice that it didn't really matter what wave you were in, since you just had to join the hoards and push forward to the start line whenever you could. It was definitely a party atmosphere, and I already had some color on me before we started. There was a guy on a platform with a mic getting us pumped up at the start line, and he couldn't remember(?) whether runners should be to the right or left of the walkers. I think he intentionally forgot or was trying to be funny.

That being said, there were SO. MANY. WALKERS. I couldn't even run the start. My whole race was spent just zig-zagging around everyone walking. I probably ran an extra quarter-mile, what with all of that. I caught up to the wave in front of us and possibly the one before that, too. The course wasn't very wide, either, just one lane of a road. The color stations were kind of eerie, though. It was like a big purple cloud and you could hardly see in front of you. Then at a few of the color stations they blasted you with some type of colored liquid. Right in the face, in my case. The powder color (cornstarch) got in everyone's mouth, and it was nasty and gritty.
I managed to run the race as most I could, and it was just a down and back thing. That means you could technically "cheat" and cut over into the back part. Well, two girls who were walking and decided to cheat about 3 cones down from the turnaround and stopped to go the other way. I was running behind them and completely barreled into one of them. I have no regrets and no sympathy. (She didn't even fall.)
My final time, as best I could tell was 29:14ish. Not my best, but I'll take it.
Overall, it was a fun race, but I won't be doing it again unless a friend wants to join. I wasn't nearly as covered in color as some people, since I didn't have a buddy to pelt me with it. My two favorite things from this race was the story to tell and the best t-shirt I've ever gotten from a race! (The material of the shirt is just nice, as is the fit.) Cora likes the sunglasses, too. Oh, and I finally have a picture of me actually running. B wasn't even sure it was me when he took it, but it definitely is!