It's been 3 years, but I am back! I lived in Norfolk/Virginia Beach (yes, that's in Virginia, for those too lazy to look at a map) back when I was dating/engaged/newly married to B. The rough timeline of that is from September 2007-August 2010. This is a huge military area, and B was a military man, so it makes sense. Now he's only a 'part-time' military man, doing his 2-week Reservist commitment here right now. Cora and I tagged along to see old friends and visit the old stompin' ground.

This old stompin' ground of course included a visit for mass at my old parish, Sacred Heart. We actually used to live within walking distance of the church, and I loved walking through the beautiful urban neighborhoods on Sunday morning. The choir at this church is just amazing, and the music director writes a lot of the music (but it sounds like it could have been written 300 years ago!). And the acoustics in there just enhance the choir sooo much. I'm such a music/choir snob. 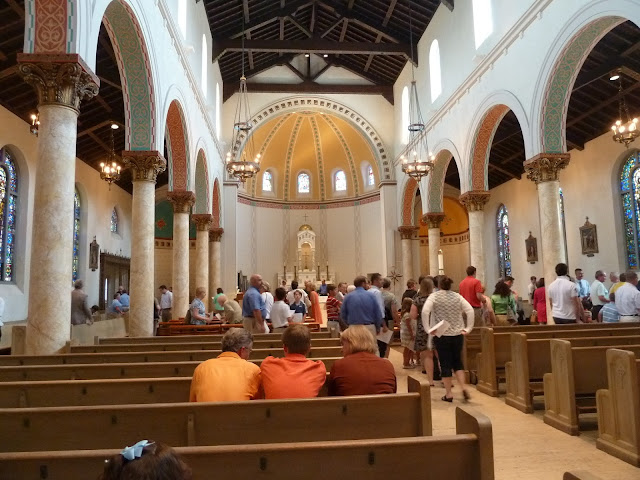 The priest saw me during his processional and perked up and gave me a little wave (or maybe it was just a nod of the head?) We got to introduce Cora to him and to some other people, and I remembered how this church really felt like home. I haven't really had that much attachment to a church since, even though I did like our Pensacola parish.

Speaking of Cora, isn't she looking quite adorable today?
As for her mass behavior, it was okay. All she wanted to do was climb up onto the pew and then climb down. Finally B gave her his iPhone and she was just entertained by pushing the button over and over. Are there any kids' toys that have buttons that work to do something on a visual level but don't make noise? Because the would be the perfect mass toy for this child.

And oh yeah, what I wore:
Two things: This skirt looks awesome with a white shirt, but the white shirt I have got a stain on it right before we left on the trip. Therefore, it did not come with us. Second thing: I know some people out there are anti-tank top or bare arms for church, but I'm not one of those people. My high school had a "2-finger width" rule for the strap of the tank (so no spaghetti straps), and I think that's reasonable. I had a non-matchy cardigan with me in case I got cold, but it's August in the South. Enough said. A lot of women in this parish were wearing sleeveless dresses, and I thought they looked great.

What do you think about bare arms in church?

And just 'cause I love it so, I'll leave you with a picture of the outside of Sacred Heart in Norfolk: 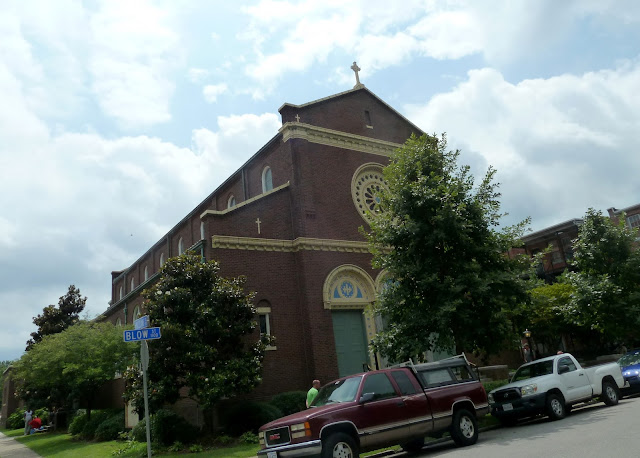