We have recently returned from a pretty massive trip! I drove with Cora while B flew, and we met up in Norfolk, VA, for 2 weeks. Then I drove a different route back to our home in Indiana. 2002 miles, 6 states, 3 tunnels, over 25 bucks in tolls, and it looked like this big circle: Here are some unexpected favorites from the road.

This album, well, it really is an experience. With most of the songs clocking in at over 6 minutes, this is a great one for a road trip. I was never a huge 'N Sync fan back in the day, but now I just can't deny the talent of JT. I especially love his smooth falsetto (which makes it easy for me to sing along!). My favorites from the album are "Pusher Love Girl" and "Don't Hold the Wall." I have actually been to this city before, way way back in 2006 for 2 days with my college Women's Glee Club that I sang in (I dug that picture above off my Facebook album from then). We went there to sing at a conference and didn't see too much of the city. I decided to book a hotel in this city as a stopover on our way out to Norfolk, and didn't give that much more thought. I didn't see much of the city until I was driving out of it, but it was simply breathtaking. I drove along one side of the Kanawha River cutting through the mountains, with beautiful old buildings to my left and eventually passed the state capitol. There was lots of "ooh-ing" and "aah-ing," and only my toddler to share it with. I definitely want to return and give Charleston a  proper visit one of these days.


3.
Highway Rest Areas
These places are awesome. I actually ate very little fast food on this whole trip, thanks to these. We had a cooler bag in the car since Cora needed milk and is also quite picky, so we just ate whatever was in there (read: lots of hummus for Cora). Rest areas were also a great place to just let her 'run' around (as a kid who hasn't actually started running but can walk fast does). If they had handicapped buttons to open the restroom door, she was all over those! (She loves pushing the one at the Y where I work out.) Cora also charmed the heck out of all the old ladies, since her new favorite thing is to say, "Hiiiiii!" to everyone. And I mean, she is cute. 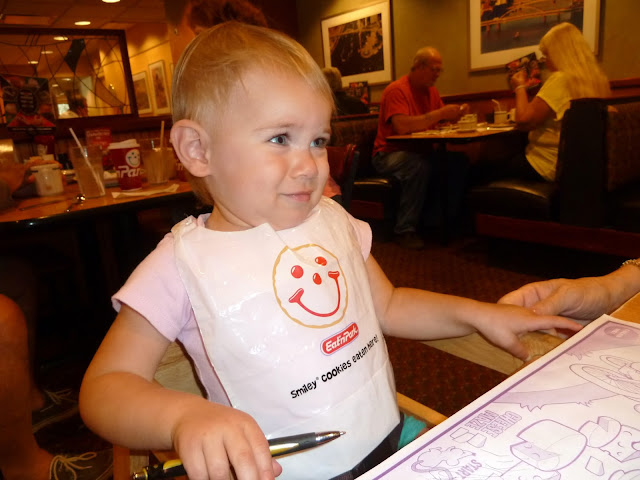 On the way home, we stayed the night with an old friend of mine from Atlanta who now lives in Pittsburgh. She asked if we wanted to go to her favorite breakfast place in the morning, and of course I said yes. I had never heard of Eat'n Park, but had to ask if you get out of your car since no way in heck was I letting Cora eat a whole breakfast in her car seat! Well, it's kinda like a much better version of Denny's. (It did start as a carhop-style restaurant like Sonic, though, hence the name). I wolfed down these S'mores pancakes in about 5 seconds flat.

My friend made sure that we got their signature Smiley cookies before we left. You can bet that if your mama eats s'mores pancakes and calls it breakfast, then you probably don't turn down giant smiley cookies.


5.
Car Mirror and My Pal Violet
Driving solo across the country with a toddler in a carseat can be tricky sometimes. We still have her rear-facing, so I am so glad that I invested a few bucks into a good mirror for the backseat. (I found it at Target.) It was easy to see if she was sleeping (she's a great car sleeper, thankfully!) or if she had dropped all her toys. I kept a bag of toys in the front seat and could just hand stuff back to her. 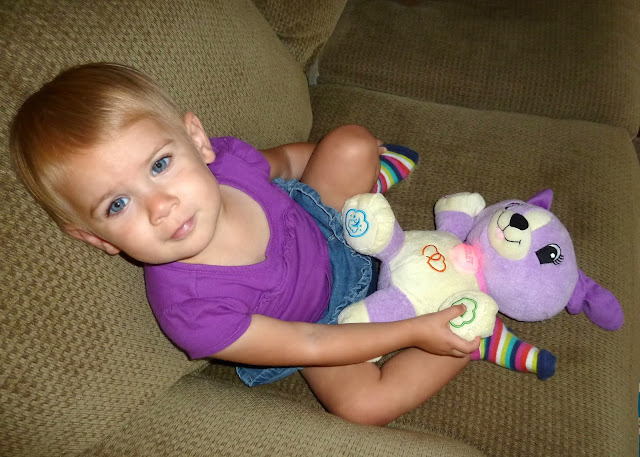 One of the biggest hits for this child was her My Pal Violet stuffed animal. (There's a green one named Scout if you want gender-neutral, too.) It's odd since she really doesn't play with it much at home, but in the car it was seriously her best friend. She just kept hitting all the buttons on the paws and listening to all the songs. It even says her name. And when I finally got fed up with hearing the same 5 songs over and over, I was able to hook it up to the computer and switch them out. As far as annoying kids' toys go, this is one of the best!