Yesterday was a double header with Jesus.

We went to daily mass in the morning because it was being said for B's grandfather that passed away in early February and then we were having brunch with lots of family members afterward. Later in the day, we hit up the vigil mass for Palm Sunday since B is working today (as usual, as usual). I have never in my life seen that many people at a daily mass before. Then again, I haven't been to daily mass at this church before. My uncle says there's usually about 100 people(!), and he said this one was way more. The Saturday one has confession immediately following, so they were out in full force yesterday. This is my first time living somewhere super-Catholic, and it kinda weirds me out sometimes. I should love it, right?

So this outfit did double-duty, both 8am and 5pm. The dress is new--my first foray into both chambray and shirtdresses--and we were running out the door in the morning so quickly that I didn't have time to figure out accessories. I had a watch on in the morning, but I guess I took it off at some point. If you have a suggestion on how best to accessorize this (long necklaces? scarf? trucker hat?), please leave me some comment love!


Dress: Old Navy // Tights: Target //
Boots: I forgot the brand but they're from Shoe Carnival

Also, crosses made out of palms. Are they okay, all you Scrupulous Sallies? I've always thought there wasn't a problem, but the priest said something about respecting your palms since they are blessed and to put them back on the table if you were just gonna throw them out. (He did not specifically say not to do origami with them.)

As for the crosses themselves, I didn't know how to make them until a few years ago when I looked it up on YouTube. Then I forgot about it for next 12ish months and had to look it up again. I was trying my best to remember the steps in the car on the way to church. I failed. I sat there twiddling with it before mass and a little bit during offertory and gave up. Good ole internettin' bailed me out once again after we got home.  [Here's a link to the video I used] 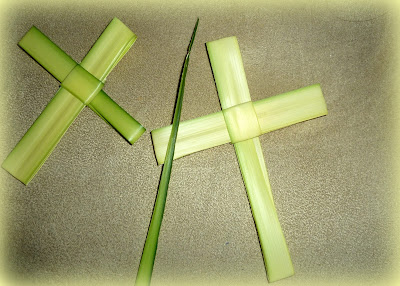 I hope you all have the holiest of Holy Weeks, and get your bums to confession if you haven't already! I'll be on a plane to Georgia on Wednesday to see my side of the family for Easter. Baby's first plane trip!

Speaking of the bambina, I'm pretty sure that yesterday, at 13 months, 3 weeks, and 4 days old, she took her first steps! She sorta walked two steps from me to B's aunt with no help, then sorta fell into her arms. And of course we couldn't get her to do it again. (She is stubborn!) Why can't we ever have milestones that I can truly figure out? (On that note, I *think* her first word was "yeah" but B thinks it was "dada." Those are the only words she knows right now anyway.)
Labels: baby milestones, catholic, fashion