I made a guess on FantasyConclave.com on who the next pope will be. I also got to guess what name he will choose, and I actually think that was fun to guess too! I chose Pius XIII as his name :)


--- 2 ---
I'm starting to wonder what will happen first. Will Baby Cora take her first steps, or will we have a pope? She almost did it this morning at library story time. But then she didn't.

--- 4 ---
We got snow-dumped on Tuesday night. Most of the schools were cancelled on Wednesday. I think it's officially the most snow I have ever seen, so of course I had to bundle up the baby and take her out into it. She did okay for a bit, then she proved she really was my daughter by hating it. 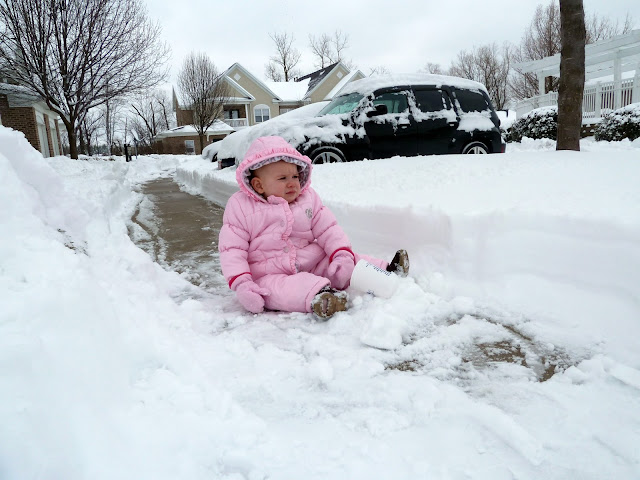 --- 5 ---
My husband B had quite the trial leaving for work in the snow on Wednesday morning. His job has to have someone there 24/7 (and no, he doesn't work at Super Wal-Mart), so he obviously wasn't getting the day off. But he was trying to leave at his usual 6am, and the stupid apartment complex snow-plower caused him a lot of grief because he . . . plowed.

Basically, the plow had only done a rough plow of the main apartment street and kicked all the snow to the side, thus creating a 3-foot hill at the area where everyone comes out of their garage (it's kind of like a side street or alley). B tried to scale the 'hill' in his Buick Century and failed. He tried digging himself out with his bare hands, then came in to get some gloves and boxes and who knows what else. (Note: we don't own a shovel. Yet.)  He eventually had to change his clothes before he left since he was all wet.

Then he called me right after he got to work (as I was waking up for real) and told me he was pretty sure he left the garage door open. (He did.)


--- 6 ---
But I do have a very nice husband who cleaned all the snow off my car right after getting home from work that same day. Then the plow finally came to really plow the parking spots, and B told me to run out and move my car. So I ran out in my slippers with no wallet or coat and drove around the block a few times.


--- 7 ---
All of that crazy weather-talk to say this:
I am officially a resident of Indiana now! A Hoosier, as we say here.
I had to pass a 'written' (on the computer) test about driving, and it was actually kind of hard! I got the first question wrong, and Cora was fussing a lot next to me, so I wasn't even sure if I would pass. But I did, and then a week later I got my official license in the mail.  I was still hanging on to my Virginia license before this, and I hadn't lived in that state since 2010. It's nice to have a home again. And be registered to vote where I actually live.