Nothing like a good easy link-up to pull me out of a blogging funk!

But first off, our new Pope. I love him. By participating in stuff like Fantasy Conclave, Adopt a Cardinal, and other sundry 'guess the Pope/learn about Conclave' fun, I was really interested in Conclave this time around. I really didn't care much when Benedict XVI was elected, even though I was a practicing Catholic. I guess I was just a self-centered, overachieving, and over-busy college student at the time and had trouble seeing the world outside my dorm room walls.

Ah, but on Wednesday I watched with nervous excitement as we waited for the announcement. I will never forget it! I think I was almost in tears by the time he was announced--and I couldn't even understand what was being said. The baby napped through it all, but I took a picture of the TV because, hey, digital cameras are awesome.
On that note, this makes me laugh:

Okay, now on to the fashion show! I went to mass last night so I didn't feel obligated to wear green. But I did it anyway. 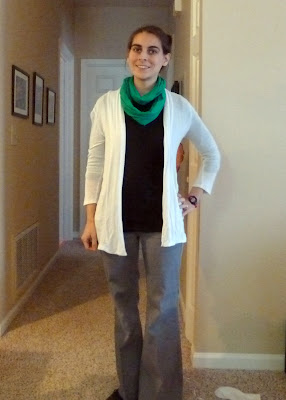 This outfit has another DIY element. That infinity scarf is really just part of one of my husband's old t-shirts that was too big for him. I used this tutorial, but once you read it, you'll see you don't really need much of a tutorial. My only issue is that this shirt was cheapo cotton so it isn't the soft and stretchy kind. I have read some tutorials about brining your shirts for that feel, though, and I might just give it a go with this.

Scarf: old t-shirt // Sweater: Charlotte Rusee // Shirt: Motherhood Maternity (thrifted, and yes, this still looks fab after all the baby weight has been shed--hooray for ruching and I like the longer length) // Pants: Alloy (I should buy more petite-length pants via catalog/internet) // Shoes (black Mary Janes with black socks, seen below): Jellypop via ?? // Probably-too-casual-but-brand-new-watch: Timex Ironman, a gift from my husband who knew I needed a watch to run and swim in! (from Meijer, I think)

I attempted to use the prop of a half-deflated balloon left over from baby's birthday (which was almost 2 months ago), and this was the tragic result: