My blogging buddy Britt from Tales From a Sailor's Soul Mate nominated me for an award. I'm positive I've been nominated for it before, and I'm 99% positive I've never actually participated. So why now? Because I feel like it, that's why. (That is such a MOM answer!) Also, I guess after 3 years of blogging, I thought I'd have more than 200 followers, but whatever. It's not like I do this for money, or even put a ton of work into it. 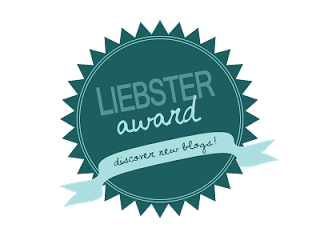 The Liebster Award is used by bloggers who have 200 follows or less to promote each other in order to make more friends in the blogging community and attract more attention to their blog! Each nominee must first list 11 random facts about their self, then answer the 11 questions provided by the person who nominated them. Lastly, choose 11 bloggers who have 200 followers or less on bloglovin' and ask them your own 11 questions!


Eleven facts about me...

1. I'm half-Lebanese, but I hate hummus. Cora loves it, though, so I buy it and make it.
2. I have sung in some type of choir from the time I was 5 years old all the way through the end of college. I've sung in some community choirs since as well. I want to get in with one again soon.
3. I played soccer for my high school's JV team, but I was terrible. There was a shortage of players, though, so anyone who could run a mile and show up for practice basically made the team. I did all 4 years on the JV team, and sat the bench for a few Varsity games at the end of senior year.
4. I only read books once, unless they're some sort of reference or cooking book.
5. I've had a name picked out for a son since before I met my husband. Hopefully, we'll both like it if we ever have a boy! (And no, I'm not telling you what it is.)
6. I get pretty into football when my team (the Georgia Bulldogs) is playing. Jumping around and screaming and "callin' the Dawgs" and all that fun stuff.
7. I was raised Catholic, and although I have questioned my faith, I have never strayed from the Church.
8. I research the crap out of most things I purchase (except food). Sometimes I research it so much, I get indecisive and end up not buying the item.
9. I ate PB&J for lunch almost every day of high school.
10. I hate swallowing pills and will opt for liquid or chewables if given a choice.
11. I loathe ironing.

The answers to Britt's questions:

1. What was the first date you went on with the man who would become your husband? Our first real date was in September of 2006--unsure of the actual date--when he volunteered with me at Habitat for Humanity (I bossed him around because it was my job), and then we went to dinner at a place called b.b.'s in Jacksonville.
After dinner, we walked along the river. I have this picture from that night framed on our wall:

2. Do you open your Christmas gifts Christmas eve or day? Used to be only on Christmas day, but B's family likes to exchange gifts with each other on Christmas Eve, so I do that now, too.

3. What is your favorite Christmas candy? Oh geez, what ISN'T?? I love M&M's, no matter what color they choose to make them. Those Snickers tree things are yummy, too. Really, if it has chocolate and peanut-something, you can't go wrong.
4. What is your dream job and why? Ugh. I know, I know, most gals I know would say, "A stay-at-home mom, I'm living the dream!" But I don't think it's my dream job. I still think I would like to be a Family Life Educator and teach budgeting and parenting skills to people who want to learn them. And I would do it part-time so I could SAHM it up the rest of the time.
5. Were you named after anyone? Nope. The story goes that my mom always loved the name Catherine, but when they adopted my sister a bunch of her friends had just named their kids that. When they got surprise-pregnant with me, she basically said "Oh well, I'm using it anyway." Sometimes I think about if my sister's name and mine were flipped. It would be weird to be a Carolyn.
6. If you could pack up your bags and go anywhere in the world right now, where would you go? Somewhere warm! It was 5 degrees here this morning. I just don't do single digits (or negative temps). I need to cross Hawaii off my list of states, and you don't need a passport (mine is expired, and I haven't gotten a new one yet), so that would work!
7. Where is the furthest you have traveled from home? Rome, Italy. (I had to plug a few cities into a distance calculator for this!) I studied abroad in Italy one summer in college, and we ended our trip in Rome.
8. If you were told you could only read three books for the rest of your life, what would those three books be? Ugh, that would suck (see #4 in the first section). I would probably pick the Encyclopaedia Brittanica #25 because I think it's the S's and looks to be the biggest, the America's Test Kitchen Family Cookbook, and, ugh, maybe some type of parenting book (the only one I've actually read was The Womanly Art of Breastfeeding, but perhaps Parenting With Grace would be better for the long haul, but I wouldn't know.) So, yep, I'm a total pragmatist.
9. Do you play video games? Sorta. We have a Wii; I play it rarely. If so, which is your favorite? My favorite game is a tie between Samba de Amigo (maraca game!) and Lumberjacks (exactly what it sounds like, and an awesome party game). I want to try some of the Zumba games for Wii.
10. Would you rather go to the movies or wait until it comes out on DVD and watch it at home? I haven't set foot into a movie theater in TWO YEARS, so actually, that's kind of appealing to me now to just escape my house for a bit. As long as someone else is paying and will buy me the overpriced popcorn.
11. Were you ever in any plays throughout your school years? Sorta, not really. I was a "chorus member" for Joseph and the Amazing Technicolor Dreamcoat when my 8th grade chorus put it on. I wore all black, but still had to do hand motions and such. Then I did the musical revue things in high school (blogged about here), which weren't really plays. In college, I definitely DID do a play--the 24-hour play project! Our group had to write a play from scratch and then perform it 24 hours after we got the theme. Ours was called "Let's Eat Out!" (the whole play was laden with innuendo), and I played an Indian woman who worked at Outback Steakhouse because the ignorant manager thought she was an Australian aborigine. It was a riot!

Oh wait, I just forgot. My stage debut, if you will, was a Christmas production in 2nd grade. I don't remember if it had a name, but I got to sing some line like, "If you were a little cat, I'd be your meow. MEOW!" and I held out a stuffed cat and yes, actually, did a pretty good meow.

As for picking the 11 blogs, a lot of the blogs I follow have over 200 followers so I am just going to pick a few:

Beth Anne at Beth Anne's Best (She apparently has a load of FB followers, but I'm including her anyway--and she won my giveaway!)
Melissa at The Red-Headed Runner
Kayla at Number One Petersons

Now here are your questions ladies, if you wish to play along!
1. Do you shop at Victoria's Secret?
2. How long do you leave your Christmas decorations up after Christmas?
3.What is something that you're not good at but you would like to be better at?
4. If you could only eat 3 meals for the rest of your life, but your nutritional needs would exactly met with no issues, what would you eat?
5. Do you have a favorite charity/non-profit?
6. What type of music did you listen to in high school?
7. What is your favorite Christmas/holiday movie? And your favorite carol?
8. When is your usual bedtime?
9. How many pairs of shoes do you own?
10. What is the "crunchiest" (most earthy/hippy/green) thing you do?
11. Do you watch reality TV shows? If so, who is your favorite winner of a reality show?


It seriously took me 2 days to write those questions, so I hope at least one person out there answers them! If I didn't actually tag you in this post, but you want to answer them, by all means, go ahead!
Labels: about me