--- 1 ---
My entire family was here last week for Thanksgiving. They drove up in one van on the 12-hour trek from Georgia. That means my husband had to step over every single one of his in-laws for 6 days straight. He handled it quite gracefully. Also, with my niece Emma here, it meant we had two potty-training toddlers under one roof. Emma's almost 3 and we were hoping having her see Cora on the potty would help, but I don't think it did.


--- 2 ---
So yeah, we're still sorta potty-training Cora. As a cloth-diapering mom, it is sooooo nice that my kid usually poops on the potty! She doesn't really communicate when she needs to go, though, so we're definitely not there yet. I just put her on both before and after her nap, and that's usually when she poops. I've only cleaned TWO poopy diapers in the past month, and B has cleaned one! My goal is to go a bit more full-force around when she turns 2.


Also, I would like to note that Cora and her cousin Emma were wearing the same shirt in different colors, and it was completely unplanned. (It's hard to see in these pics, but the shirts have sparkles across the chest.) My sister and I didn't even know they owned the same shirt until they both were wearing them that day.

It wasn't terrible, but Carrie Underwood is obviously not an actress. It was weird without any audience, but still being a stage version. The truth is I have a lot of respect for Carrie because I, too, am a singer and not an actor. I really do want to be cast in a stage production of . . . something one of these days. Any pointers are welcome. Also, let it be known that I suck at auditions.

--- 5 ---
The closest I've gotten to being in a play or musical was back in high school. My school chorus would put on a musical revue every year--just singing and dancing various songs within a theme, no acting. But at least we got costumes. So here I am as a nun. (This was on VHS, and I just filmed it off the TV. Low tech.)


But yeah, it's pretty obvious I don't know anything about acting.Why am I looking down? Or is that just my eyebrows playing tricks?


--- 6 ---
Oh hey, have you checked out my giveaway yet? It's buried in a post about how to actually win giveaways, because that's how I roll. Just like this is buried in Take #6 between a ridiculous video and a cute picture. 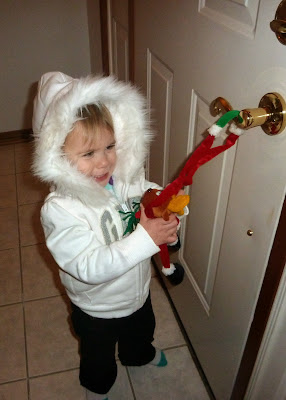