Haven't done one of these in a bit, but so many scattered thoughts in my mind today so why not?

--- 1 ---
I had my first last name recognition in this town! Last week when I was dropping baby off at the gym's childcare, my name kicked up on the screen and the childcare worker asked if my husband or I was a teacher. She said she knew there was a teacher with that last name at her child's school. We have a pretty unique last name, but I did say, "Well, there's a lot of us." I don't know what all of B's relatives do, but I figured out within five minutes which aunt it probably was.


--- 2 ---
On the flip side of this, I had my first encounter with the "dark side" of the family. Not to air too much dirty laundry here, but since it's starting to affect my life I'm okay with mentioning it. One side of B's family had a big falling out among the siblings and a handful of them don't talk to each other any more (his parent is one of 10 kids). When I went to church with his aunt a few weeks back, apparently her brother she doesn't talk to was also there and walking behind us as we walked out. I've never met this person and was trying to sneak a look but failed.

The whole thing just weirded me out. I only have one sibling, and I couldn't imagine not talking to her if I ran into her randomly. (Although with only one sibling, you kinda know where they are at a given time.) I guess when you're one of ten, your siblings are more like cousins? But even then, I'd talk to my cousins.


--- 3 ---
I had the worst Wednesday night. The day itself went pretty well, but it all went downhill around 6pm. Here's a recap: managed to burn our dinner even though it was in the crockpot, got rear-ended at the first light coming out of our place by a girl who I'm pretty sure didn't have insurance, tried to find a movie at the library that said it was there but apparently wasn't anywhere to be found, tried to exchange something my husband bought for a different size but couldn't find it in Meijer after looking for half an hour, had a package I sent get labeled "missent" and spent too much time trying to track it and figure that out, and then once I finally got into bed the monitor started 'sputtering' quite annoyingly and then the baby woke up screaming within 2 minutes of my head hitting the pillow.

That makes me tired just thinking about it. But I also realize that most of that is a bunch of first world problems.

--- 4 ---
Wanna know how all of that was resolved? Dinner: we ate it anyway. Fender-bender: decided to let it go since my car is now over 5 years old and it was a small scratch. Library movie: never found it, even after stalking other library patrons to see who had it (checked online after it closed and still says it's there)--will try again today since you can't put them on hold. Clothes exchange: made my husband deal with it today since he's the one who actually knew where they were in the store. Package: giftee called the post office and it's still being sorted out but should make it to him soon. Monitor: changed the channel, which I seem to have to do once a month. Baby: nursed back to sleep.


--- 5 ---
Speaking of the baby and sleep and my recent cry-for-help blog post, I checked out the "No-Cry Sleep Solution" from the library and am hoping it will answer my prayers. I've made it all of 20 pages in and all I've found out so far is that a lot of babies are far, far worse sleepers than mine.


--- 6 ---
If you're not doing anything tonight, you should watch Elf with Dwija and Cari! That was actually the movie I was trying to get at the library. I've never seen it, but I've heard good things. If I find it today, I might just join in. However, my parents are in town so who really knows what the day entails. 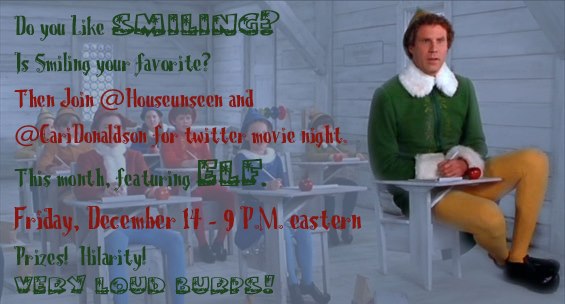 --- 7 ---
My parents are here! My parents are here! They drove up from Georgia last night (because they are nuts), and they are staying until Tuesday. They are currently both sleeping since they didn't stop and got here at 6am. We're taking Baby Cora to see Santa at the Y tomorrow morning and going to buy the baby a big-girl convertible car seat at some point. I'm sure we'll do other fun stuff too, and maybe I'll even tell you about it!