Our Quick Trip to Houston

Last week, Baby Cora and I joined my husband B in a trip to the fourth-largest city in the United States.  We had a few reasons for traveling to Houston, but the primary one was that B was attending a job conference where he got to interview with five different companies.  There are tons of engineering jobs in Houston, so we know there is a possibility we could end up living there after B's military separation.  None of us had been to that city before, so it was a good idea to check it out and make sure we didn't hate it.

It also helped that we knew Cora does well on road trips.  This was her third road trip, and she's only 5 months old!  She has now been to 10 states.  We also got to meet up with some family, as we each have a cousin living in Houston.  Business cards were exchanged and advice was given over meals at the Rainforest Cafe and the Cheesecake Factory.  And I got to "talk shop" in my own way with their wives who fawned over the baby.

While B was off doing his thing, Cora and I explored the city a bit.  Since we were staying by the Galleria mall, we wandered around there.  (Bonus points because it was indoors, as Houston doesn't have the benefit of the coastal breeze we have here in Pensacola.)

After being in the mall for awhile and not buying anything other than lunch, we headed to a landmark around the corner known as the Water Wall.
At the suggestion of reader Erika, we ate dinner at Pappasito's for some yummy Tex-Mex. 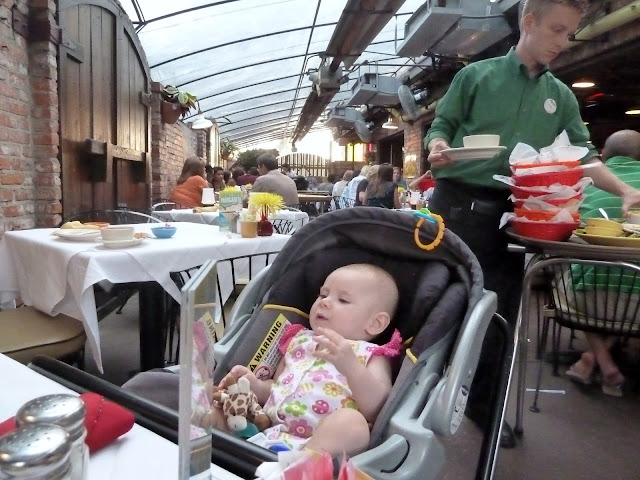 On the second full day there, Cora turned exactly 5 months old!  We usually do a picture on the glider with her "birth-stat elephant," so we brought it with us.

As B went into his interviews with his fancy suit and power tie, Cora and I went to explore downtown Houston.  It was H-O-T that day, so I found some indoorsy things, like going to an observation deck on the 60th floor of a skyscraper.

We actually did walk around outside a bit, though, and found this adorable park called Discovery Green. 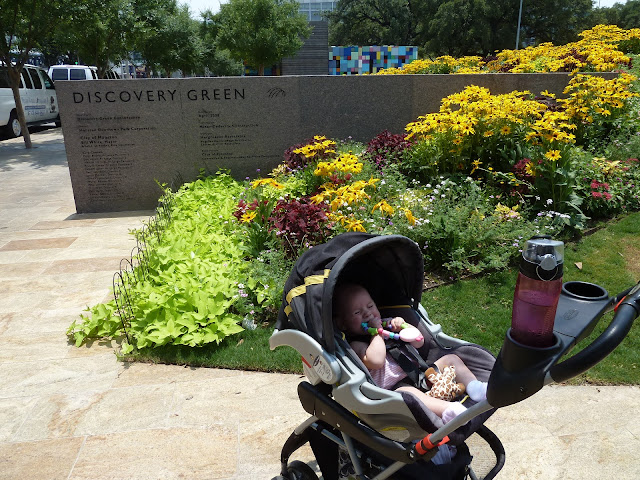 It had a big splash area where a bunch of kids were playing in the water.  It took every piece of my restraint not to join them.  But I did find this other thing with water I could stick my head under.

Overall, the trip was good, barring one misadventure with a parking meter that refused to take my credit card and then ate my dollar and went to sleep.  But a kind stranger bailed me out, and I ended up actually liking the next (perfectly-functioning) parking meter I used. 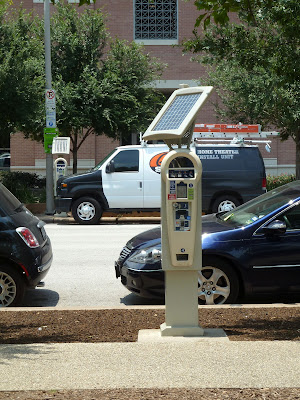 How could I not love a parking meter that runs on solar power?  I guess the "Energy Capital of the World" really does live up to its name!