touristy things from the heart of dixie

Remember how I said I had some major wanderlust last week?  And that I was headed back to my hometown over the weekend?  Well, I've gone and come back, and I was able to work some touristy stuff into my trip.

I had to drop B off at the Atlanta airport so he could fly out for his monthly trip, which meant the entire drive from Atlanta back to Pensacola was my own.  The night before, I decided to look for something interesting to see along the way.  My first thought was to go see the home of To Kill a Mockingbird in Monroeville, AL.  Good thing I looked it up in advance though, since it is apparently closed on Mondays.

Instead, I decided to hit up Montgomery, since I drive right through it anyway (it's where I change highways).  This place sounded interesting:
I love these kind of off-the-wall places.  This place would've been pretty fun to bring a kid to, or just play around in the play/learning area myself with no one watching.  However, the latter option was thwarted because a school field trip was there standing in my way.  I wish they would've at least let me drive their sweet van.

After my museum bust, I decided to walk up the two blocks to check out Alabama's Capitol building.  It's gorgeous, see? 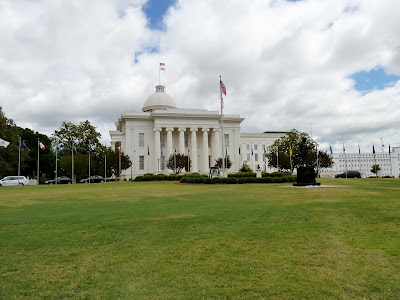 However, it was apparently National Field Trip Day or something.  Upon entering, I soon discovered this place was teeming with children.  Mostly elementary age, mostly in matching t-shirts.  This seriously annoyed me to no end!  One sad thing about this is that the kids were all pretty well-behaved, but they were just EVERYWHERE.  The other sad thing about this is that I have a degree in Child and Family Development, but I really really dislike rooms full of children.  It was like being amidst a swarm of locusts.  If that makes me a bad person, then so be it.  I never intended to be a classroom teacher, and the fact that I never will be was just hammered home for me on this Monday morning in Montgomery.  Nevertheless, I did hop onto one of their docent-led tours at one point (I was stuck on it, actually, because I couldn't escape that room) and learned the 5 capitals of Alabama.  At the time I was done touring and actually wanted out of the building, so many students were pouring in through the doors that I was trapped.  I am not kidding!

My final stop was the First White House of the Confederacy.  I had been to the actual White House of the Confederacy up in Richmond last year when I lived in VA, so of course I had to see this one too.  What did I find when I walked in?  Yep, another field trip.  Gah.  I couldn't leave that one at a comfortable time either, because all of these other groups were taking pictures on the steps out front.  I'm definitely in the background of their class pictures, talking on my cell phone on the front porch Jefferson Davis once trod.

The Alabama Archives were next door to all this, but I didn't even attempt it.  Kids were still all over the sidewalks and eating lunches in the lawns.  Once I was back to my car, B called to tell me he got in okay.  I whined to him about how every field trip in America must have been in downtown Montgomery that day.  He responded, "Couldn't have been every field trip.  There was a middle school group on my flight."

Field tripping students: 1
Cat and B: 0