getting to know me

Yes, I realize that I don't do a lot of "who I am, what I'm about" posts. For the most part, you've had to read between the lines to figure me out.

But today, I'm gonna be a nice girl and throw you a bone.  I'm linking up with MannLand5's bloghop.  I'm also gonna do 25 facts about me, inspired by the #100factsaboutme twitter tag.  Maybe I'll come back at another time and do the other 75, but right now I can only think of 25. 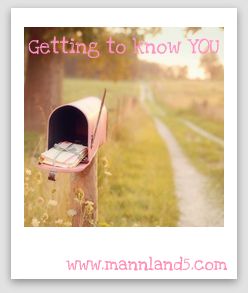 1. do you weigh yourself?
I weighed myself constantly when I was pregnant, and I didn't gain any weight the whole time since I miscarried.  Since then, the only time I think to weigh myself is when I'm watching "The Biggest Loser"
2. what's the nastiest thing you've ever eaten?
I'm kind of a picky eater, so I'm sure there have been many. Raw oysters when we didn't know what we were doing was awful (it was like swallowing a mouthful of seawater). Years later, someone else taught us how to do it properly, so now I don't flinch when I hear that other people like raw oysters.
3. snail mail or email?
I sign up for a lot of free samples, and I can only get snacks in snail mail!
4. do you have any irrational fears...what are they?
Spiders and bugs, but only in the house. If they're outside, I don't care. I also don't really like toads, especially when they're ON my front door (yes, ON).

5. do you play an instrument?
Voice: the only instrument made by God (my choir director has a t-shirt with those words, and I love it!)

6. would you rather be bitten by a snake or attacked by a bear?
Ugh, terrible question. I guess snake bite and pray.

7. do you ever go braless in public?
Nope. I do wear those shelf-bra tank tops, but I don't think that counts as braless.

8. today i am thankful for........................?
God, the season of Lent, the beautiful weather we get in north Florida, that I'm only a 10-minute drive from the Gulf, that my husband is here next to me and we're both healthy, that we have enough money for food on the table and a nice place to live and that we can do that without me working.

25 Facts About Me
1. I've lived in 5 different places, but all of them have been east of the Mississippi and south of the Mason-Dixon Line.
2. I hate cream cheese, and I definitely hate cheesecake.
3. In college, I had a job that consisted of reading text books onto cassette tape.
4. I was a member of my high school's Quiz Bowl team, and we came in 2nd in the state tourney my senior year.  We also won the "sportsmanship award."
5. I'm Catholic, and I can count on one hand the number of times I've missed Sunday mass in my entire life.
6. My sister is adopted.  I'm not.
7. I haven't had any living grandparents since I was 13.
8. I really love cats and cannot get one because my husband is allergic.  I have no interest in dogs.
9. I "own" a cat named Frisky that I got from the pound when I was in 4th grade.  He still lives with my parents, and he now only has 3 legs (and he's 17), but he's a fighter.
10. I am a huge Kelly Clarkson fan.
11. Things I've volunteered with on a regular basis in the past few years: therapeutic horse-back riding, botanical gardens, and currently Navy-Marine Corps Relief Society
12. B and I forgot to kiss at the end of our wedding mass.  I didn't even realize it until someone said something afterward.
13. Neither of my parents are from Georgia.
14. I was in Girl Scouts from 1st through 12th grade, and I earned my Gold Award.
15. I graduated 4th in my high school class of 300.
16. I've never dyed my hair and don't plan on it.
17. I did gymnastics from when I was 4 until 5th grade.  I still can't do a back walkover and wish I would've stayed with it a bit longer.
18. My birthday is June 1.
19. I've never weighed more than 116 pounds.
20. I have two bachelor's degrees (not a double major, but two actual degrees).  One is a BS in Child & Family Development; the other is a BA in Advertising.
21. My college tuition was $0 because of the HOPE Scholarship.
22. My first job was as a waitress at a sit-down Chick-Fil-A (Dwarf House).
23. I can't stand medical dramas or cop dramas.
24. I love college football but don't really care much about pro football.
25. We went to Mexico on our honeymoon because the swine flu outbreak made the plane tickets cheaper.