--- 1 ---
I finished another book for the year, my third . . . and my 3rd conversion memoir. Those things suck me in! Girl At The End of the World just blew my mind. Elizabeth Esther (the author) blogs over yonder. I luckily never knew such abuse as a child. And some of the theology that she was brought up with--yeesh. (There was one thing about a woman's soul being subject to a man's soul that had me hollering, "Are you kidding me?!" over and over and over.)

I'm joining a Catholic women's book club soon, and I might be suggesting this one. There were even discussion questions in the back, so I guess that makes it book club material?? 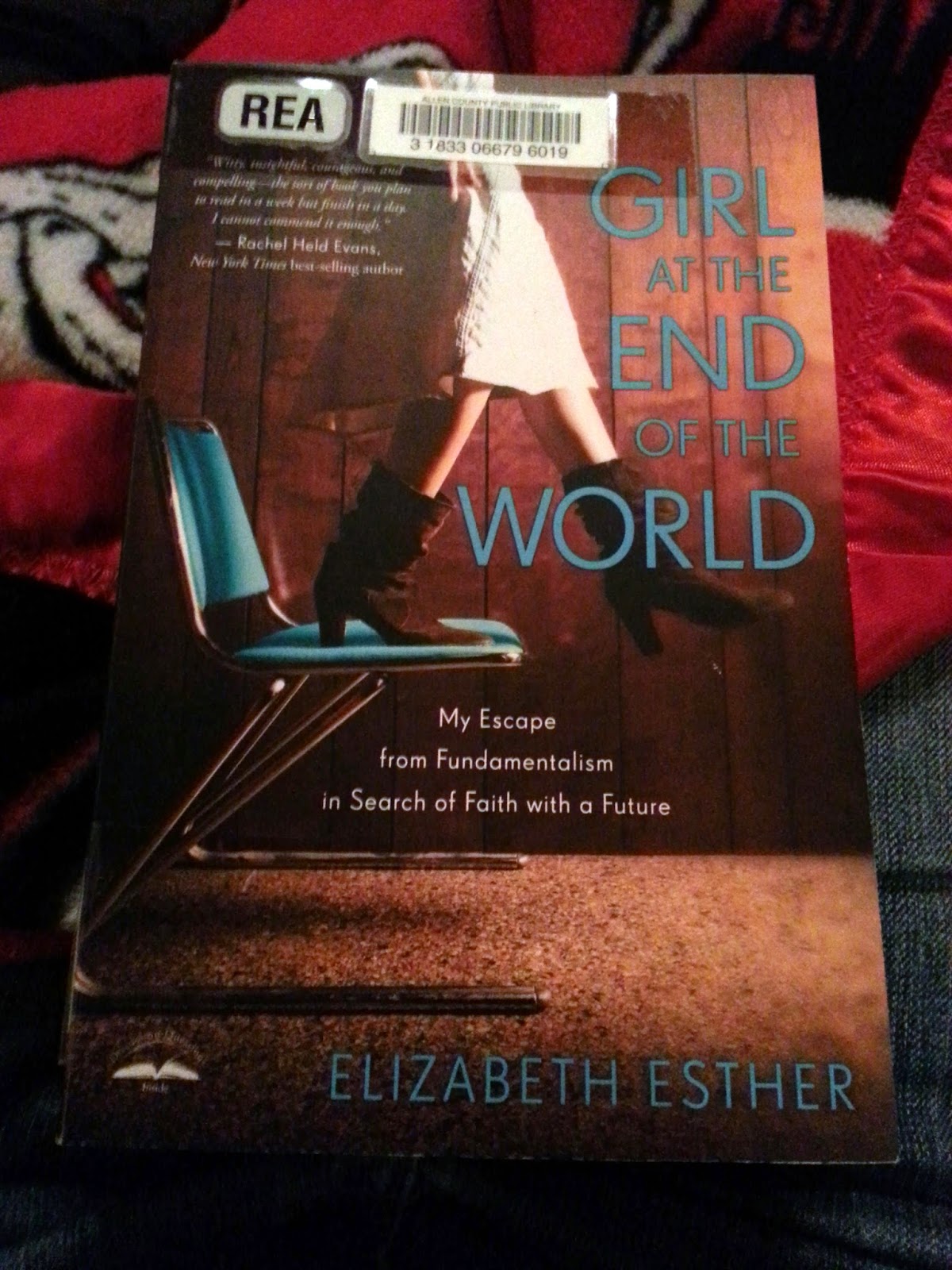 Also, it's kinda cool knowing you're the first person to read a library book! It was on order when I put it on hold.

It was because my 'fun reading' looks like this: 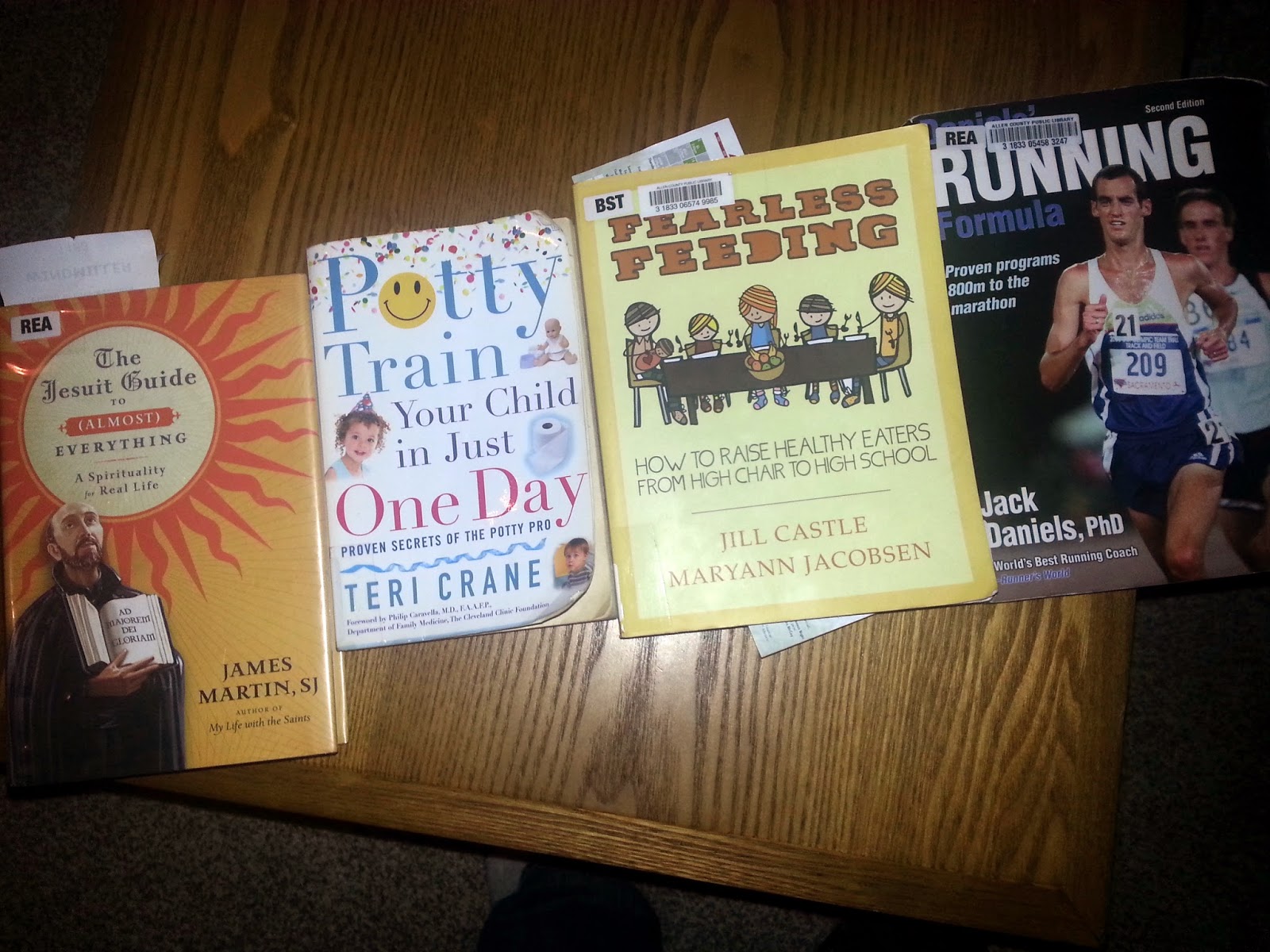 Yes, that's 5 books all at once. I did sorta make it through the potty-training one, and it was not for me. According to that book, my kid is already potty-trained. The author also made it sound like no one in their right mind would use cloth diapers, so that's just a no. I returned it to the library a few days ago. I think I'm going to focus on the Jesuit Guide and let the others just collect dust/overdue fines for a bit. 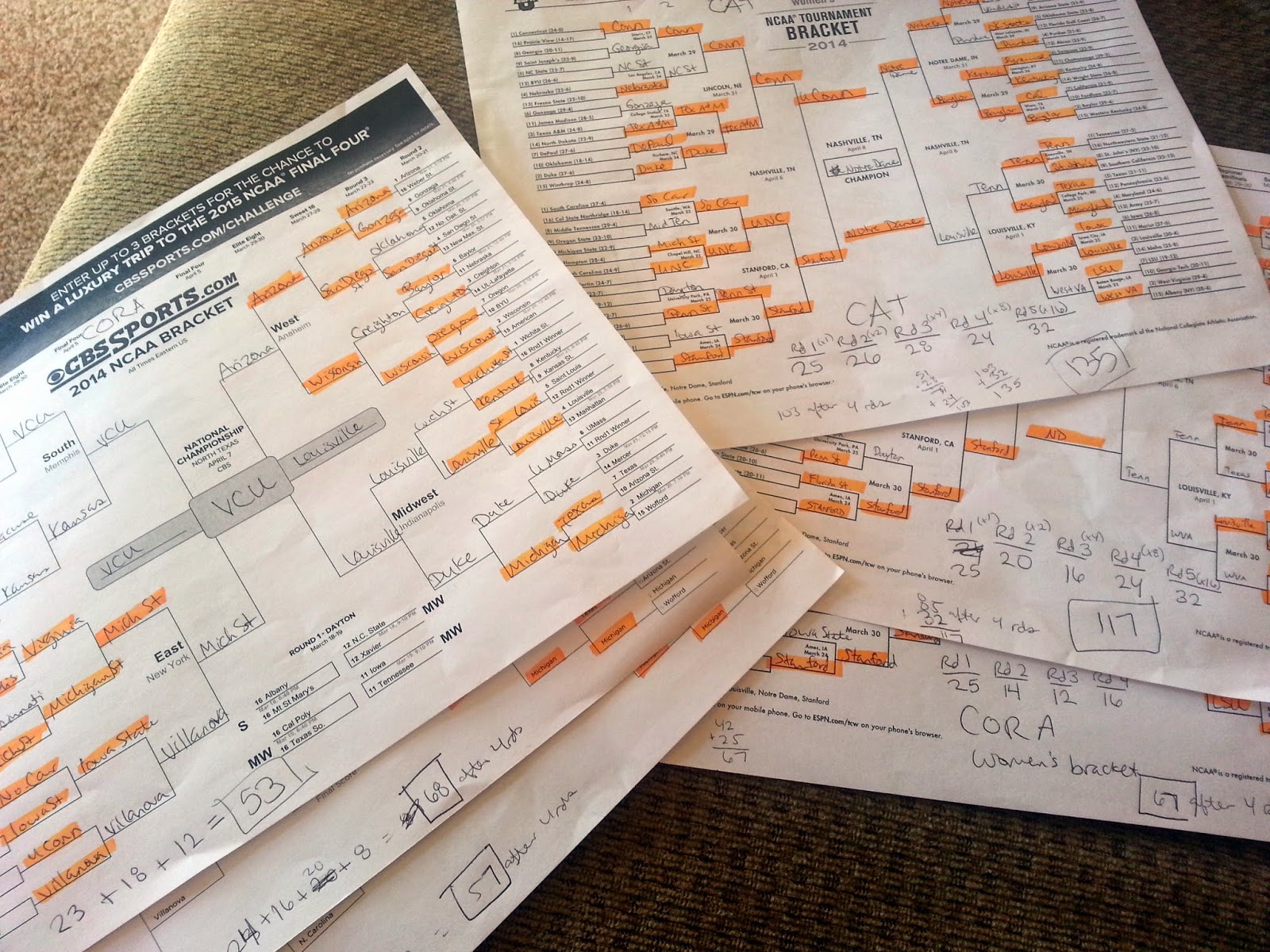 Cora's brackets were done mostly with a very scientific coin-toss method. Needless, to say, she came in 3rd for both men's and women's. I won the women's bracket with a very nice score of 135. I really feel that if we had no ties to Notre Dame at all, I could have done even better. But we both picked ND to win over UConn because that's what we wanted. One year I did a 'fantasy bracket' where I had my team (Georgia) win the whole thing (it's never actually happened), and then did a more realistic bracket instead. Maybe that's what I need to do again.

--- 4 ---
I only caught parts of the men's final match (in all honestly, I never cared much for men's basketball), but I did watch almost all of the women's final game online. Since we don't have cable, the only way to [legally] view it was on ESPN's website. However, it was the 'multi-cam' view. It turns out that meant there were no announcers. It was just the sound of the game being played. It was sort of interesting, mostly in that I could hear a little bit of what the players were yelling to each other. And I didn't have to listen to the same things being said over and over again by the commentators. 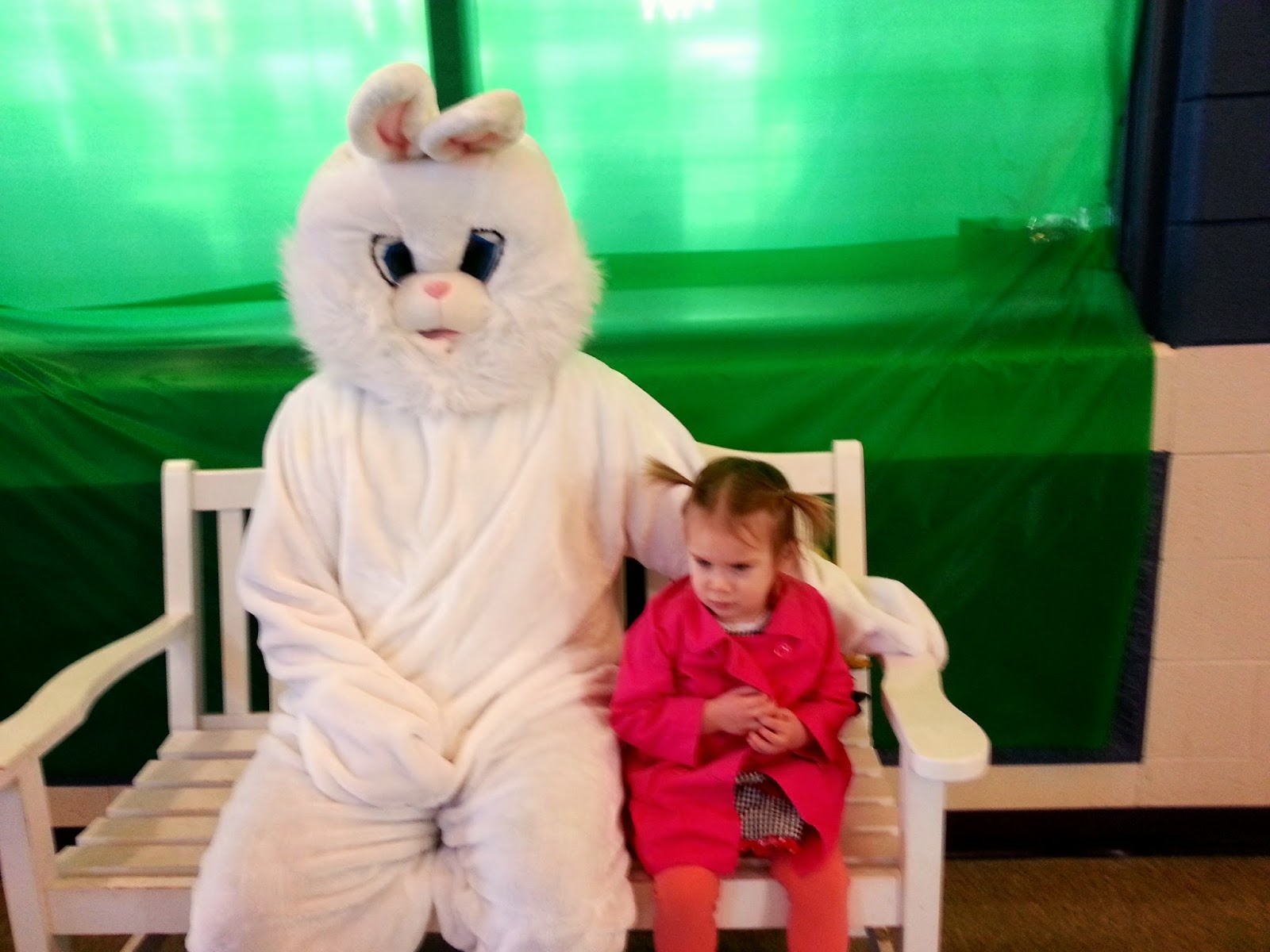 Why are the Easter Bunnies so odd-looking? I've never seen one I like.


--- 6 ---
Tonight (Friday), we had B's aunt, uncle, and grandma over for dinner. I'm trying to host dinner for someone at least once a month because it forces me to keep a clean house. It's also rather fun. I made macaroni and cheese using half gouda/half cheddar, and it was delicious. I also made my own fresh breadcrumbs for the first time ever. (Um, that was easy. Never buying those again.)

We finished off dinner with another first for me, monkey bread: 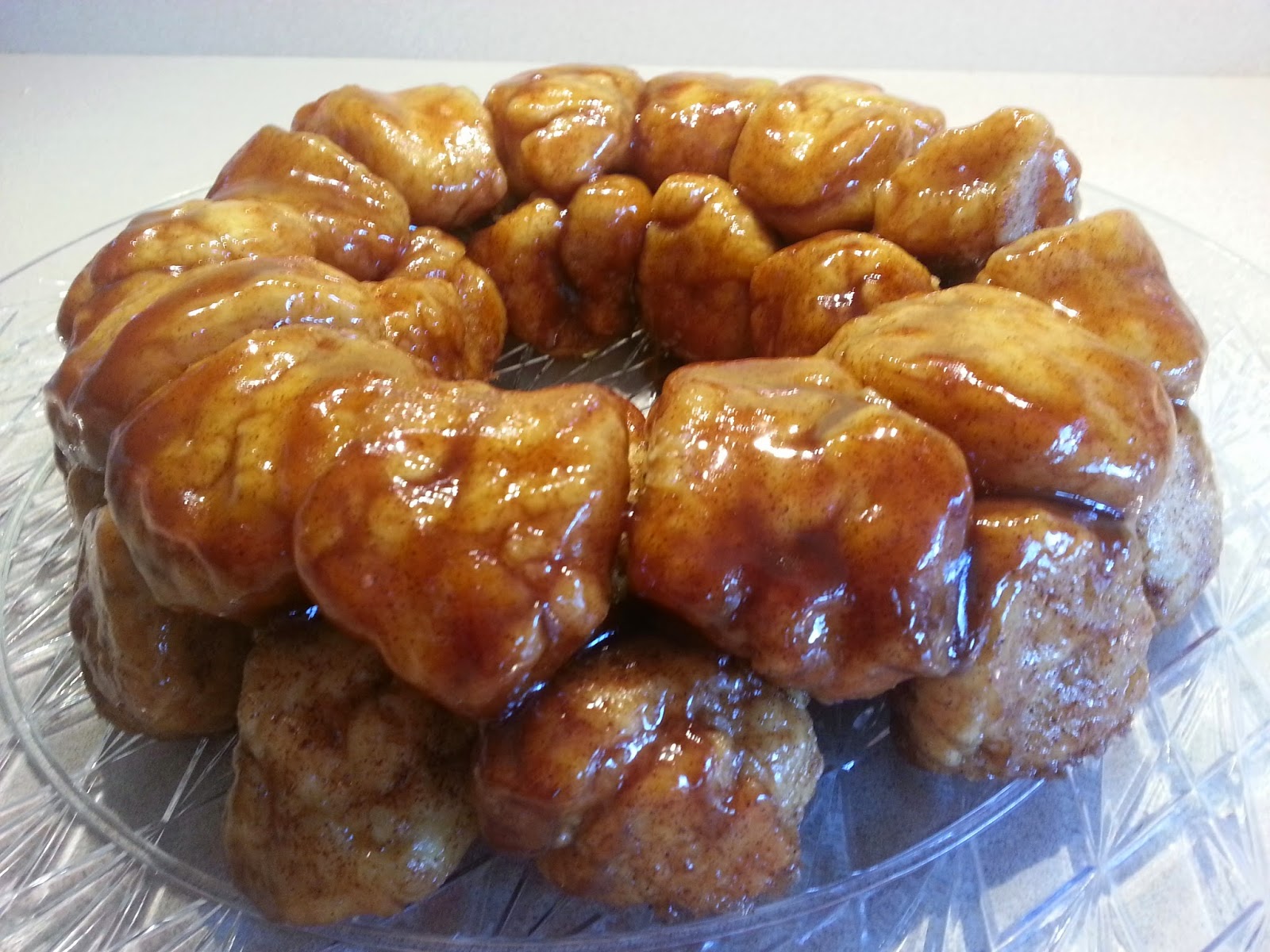 I made this completely from scratch, using the recipe from America's Test Kitchen. (Which, by the way, is a book I still do not own--I just keep checking it back out of the library.) There's another method out there that uses refrigerated biscuit dough, and honestly, I think I'll be using that from now on. Sure, this one was great, but it was a lengthy process that involved letting the dough rise 2 different times. If I had done the biscuit method, we might have actually gone outside and done something this morning.


--- 7 ---
I'm so glad it's finally warm and beautiful here. We even took our dinner guests on a walk around our street after filling our bellies. But flower names. Freakin' flower names, man. Every time I'm with older women, they look over yonder and ask me, "Oh, are those crocuses?" (Please tell me this happens to other females.) I recognize pansies and daffodils, but only after they've already bloomed, and that's all you'll get from me. I'm sure I learned other ones at some point, but it's been a long winter.