This post will have a story, a diatribe, and a cute video of a baby kangaroo being born. I may be a little long-winded, but oh well. Just hear me out.

The Story: We have a membership to the zoo here, so one morning I took Cora in the stroller for an hour or so. My favorite part is the Kangaroo Walkabout exhibit, where you get to walk through the kangaroo habitat, and sometimes they even hop on the path right in front of you! It is seriously cool, and it's one of my favorite parts of the zoo. It was a quiet morning that day, and it was just Cora and me and one other little family in the exhibit. And it was that same morning that we all bore witness to two kangaroos mating. All the kangaroos hang out near each other (there are about 12 total), so the mating kangaroos were sorta in the middle of the whole mob* and you couldn't not see it. Cora is still small (16 months), so she obviously doesn't question stuff yet. I just said, "Oh look, they're mating." The 3-year-old girl there with her dad didn't  really question it either.
(*Actual name for a group of kangaroos--aren't I fancy?)

There was a (volunteer?) docent talking about the mommy-joey relationship at another part of the exhibit. It's a children's zoo, so she was holding a kangaroo stuffed animal and mostly talking to the 3-year-old girl about the baby in the pouch. The girl went back to go see if she could find the joey in a momma's pouch among the kangaroos. As she left, I saw that the two from before were still mating, so I said, "Looks like you'll be getting a new joey soon!" Then the docent stammered, "Oh, uh, sorry about that." I said back to her, "Don't apologize; it's just nature." 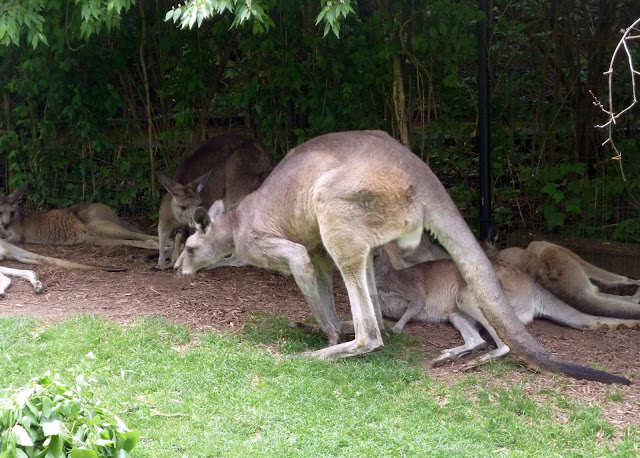 The diatribe: It's Just Nature.
Boy, did the puritanical prudishness of our culture rear its head right there through the mouth of that docent. Why is she apologizing for something that the kangaroos are instinctively doing? And she's even talking to us about the fruit of that act! How have we gotten to a point where we can be so happy about a baby but so ashamed of the act that created it?

Sex is not inherently dirty. It is only dirty because our culture has made it so. Sex is dirty when it's premarital, extramarital, one-night stand, rape, etc. Sex in a committed marriage with two consenting adults is not dirty one bit and is not something anyone should be apologizing about. Also, from my trivia knowledge, only humans and dolphins have sex for pleasure, so a kangaroo is just doing what his instincts tell him to do. He's not rationalizing it, and he obviously doesn't care who sees it. The kangaroos are naked, unashamed, and it's not an intimate act in the way it is for humans. Even though we are rational beings (unlike animals), and the intimacy of the act is what keeps us from having sex in public, we do conceive our young in the same way as almost all mammals.

So, my point?  Don't apologize for animals doing what they do to propagate their species. And don't be ashamed of sex within your marriage.

The video:
In all of this thinking and huffing and diatribing, I remembered seeing a sign at the zoo that said mommy kangaroos are only pregnant for a month before the joey is born. This kinda blew my mind, so I read up more about it. Basically, kangaroos are born the size of jelly beans and then do all of their development in the pouch. It is seriously fascinating. So here is a kangaroo giving birth and then the little joey making its way to the pouch, where it will develop for the next several months (just like we did in the womb!).

The other thing I love about kangaroos? They are classified as "macropods" --literally meaning "large foot"--and I think that is an awesome name to call any sister/husband/child of yours who wears a big shoe size.
Labels: babies, slightly deep thoughts