— 1 —
B and I have been having fun keeping up with the Olympics.  He's a lot more into it than I thought he would be!  I think he's watched about every sport that has come on.  He likes to whine and moan about some of it, though.  I sometimes agree.  One thing he hates is swimming.  I get this.  Why is someone who won a gabillion medals in swimming the "greatest Olympic athlete"?  You can win a gabillion medals in swimming because it has a gabillion events.  (17 events, I just counted.)  But what about those sports that only offer one medal?  I personally love women's beach volleyball, and I think May-Treanor/Walsh is one of the greatest teams of all Olympic history.  And what about skeet shooter Kim Rhode who has won gold in five consecutive Olympics?


— 2 —
Speaking of beach volleyball, can I just say that Kerri Walsh is amazing?  Did you know this gal popped out TWO kids between the last Olympics and this one?
I remember hearing Jillian Michaels say she didn't want to "ruin her body" with pregnancy.  Um, I think Kerri Walsh just proved that it does not ruin your body if you don't let it.  (I can personally vouch for this, as I have a similar body type to Jillian and have lost every ounce of pregnancy weight and even a pound extra to boot.)


— 3 —
Going back to swimming, what in the world is the point of the butterfly stroke?  Why would you ever use this stroke in swimming?  Freestyle is the fastest, breaststroke is an endurance stroke, backstroke probably has the least risk of drowning . . . but butterfly?  To look like a fish?  I don't get it.


— 4 —
I really enjoyed this YouTube video that shows the evolution of uneven bars routines over the year.  Neat, huh?

— 5 —
Did you catch my guest post over at Many Waters earlier this week?  I talked about my views on my husband leaving active duty military service, which you can read here.  His replacement is checking in today, which means it's turnover time.  Less than 30 days left until his end date.  Yeep.  And, no, we still don't know where his job search is going to land us.
— 6 —
I've crossed two items off my 101 list lately.  The first was that I got my butt back to that farmer's market and finally bought a few items:
The honey was from a church friend's yard, so that was cool too.  You can check out their website here.
— 7 —
And yesterday I blogged about how I made ice cream from scratch without an ice cream maker. 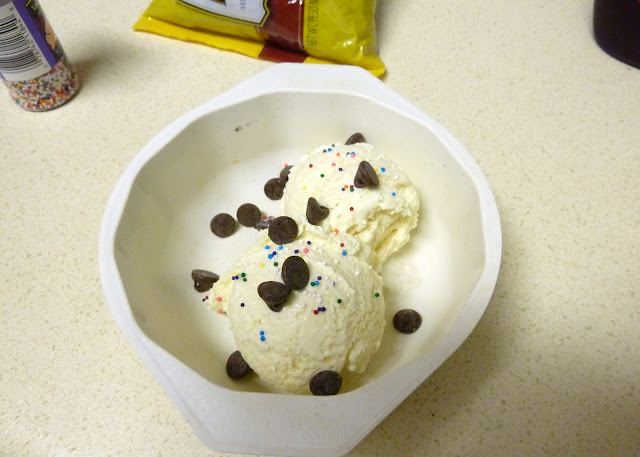 Check out how I did it here.
——
And check out more quick takes at Conversion Diary!
Labels: 101 in 1001, desserts, military discharge, pensacola, sports