This past Friday, I celebrated two very different occasions.  On the one hand, it was my birthday.  But more importantly, it was B's Captain's retirement.  I had never been to a formal military retirement ceremony before (or even a change of command), so I thought this was pretty cool.

Even though the guy was a submariner (a previous commander of the USS Pennsylvania), he decided to have his ceremony right under the replicas of the Blue Angel jets flying in the Naval Aviation Museum.  Hey, when in Rome . . .

I've only seen B in his dress whites ONCE before, and it was after we had driven for two days straight (to get to this duty station), so I didn't appreciate it much.  As this is the second and probably last time I got to see it, I was very excited, as he and the other LTs were Sideboys (that term cracks me up!).

One of the special parts of the event was a Flag Ceremony.  The MC read this poem while a flag that had flown atop the Captain's former sub was passed along the line, saluted by each sideboy, and then presented to the Captain. 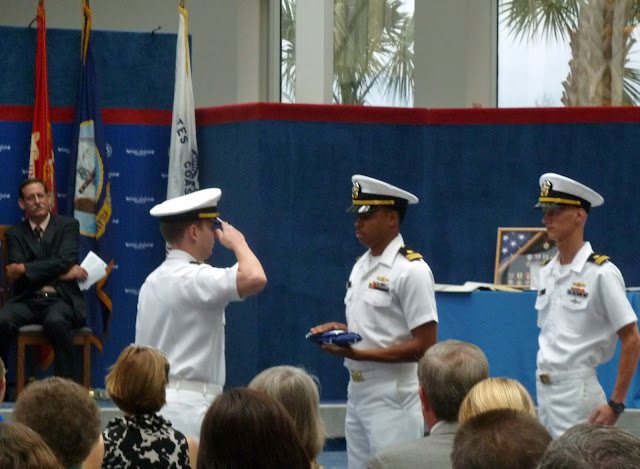 Sorry some of those pictures are a bit blurry--I was actually standing at the back holding a squawking infant in one arm while taking pictures with the other!

I also really liked how the Captain thanked his family, and they gave his spouse a certificate as she transitioned from "Navy Wife" to "Navy Wife, Retired."  It was also their daughter's high school graduation; her ceremony was the following morning.  The family got to leave on the red carpet as a Boatswain's Mate rang a bell and declared, "Navy Family, Retired, Departing." 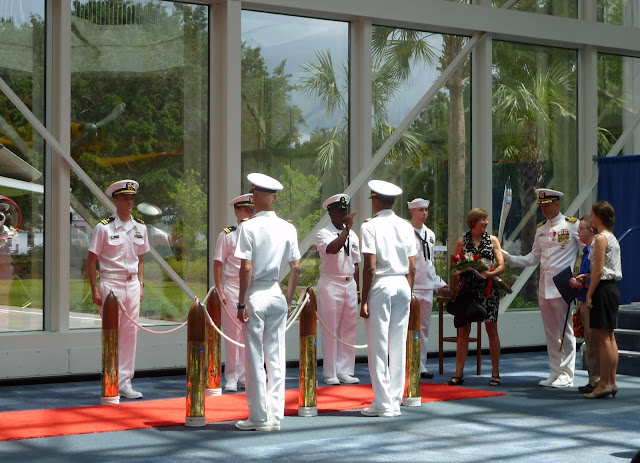 During the ceremony, the MC read a brief timeline of the Captain's naval career.  He was commissioned a week before I was born in 1984, and for whatever reason, that was just really neat to me.  Actually, at the party that night, it was mentioned that it was my birthday, and the Captain asked me (slightly joking) if I was 22.  I said, "Nope, I'm the embodiment of the length of your naval career--this is what 28 years looks like," as I leaned into my husband and my baby.  "Looks pretty good, right?"