I figured it's about time to just let y'all know what's going on around here.

Last week, we celebrated a lot!

First, B's 29th birthday was on the 8th.
Then on Thursday evening, we drove back to my hometown in Georgia.  That means that Cora gets to cross another state off her list!  Friday was spent sinking a bunch of money into repairing my car (new alternator and water pump, ugh), and then on Saturday we had not one, but TWO big celebrations of faith.

My nephew/godson received his First Communion:
And then that same afternoon, my precious baby girl was baptized!
We did two cakes, one from Publix for my nephew, and I decorated the one for Cora.  It's not awesome, but I think I did an okay job.
B had his D.C. trip early this week, so Cora and I dropped him off at the airport on Monday morning, and went on an adventure!  I did this last year on the same weekend after my niece's baptism and regretted going to somewhere a bunch of field trip students were.  So this year I steered clear of touristy places and a friend joined Cora and me for our first IKEA trip.
I got a handful of toys and toy storage and picture frames, and it was great!  This is totally my type of store.

After that side trip, I had to drive back to Pensacola on my own with baby.  It really wasn't so bad.  She's gotten a lot more efficient at nursing, so we just took our time and didn't do bottles since I would have had to pump if we did.  We only made two stops, so it worked out just fine!

Other than our travels, the big deal in our household right now is B's job hunt.  He signed up with another headhunting agency, which I think has had someone call him almost every day.  He's going to a big job conference in Baltimore next week, where he'll be interviewing with a handful of companies he matches.  If you're the prayin' kind, please add him to your list next Tuesday!  It absolutely freaks me out that wherever we end up moving to in just a few short months could be our FOREVER home.  I want him to have a good job and all, but I guess my role as wife and mom is to make sure we end up somewhere that has a good environment for families and preferably good schools.

And just because she's stinkin' cute, here's a recent picture of Cora: 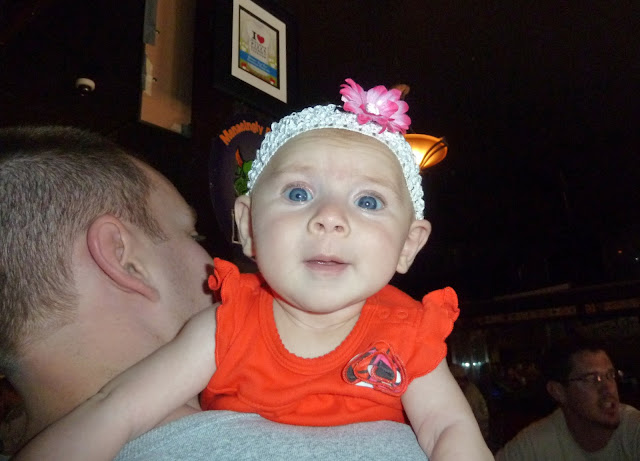