I have a quest. It might even turn into a lifelong quest, but I'm hoping it doesn't.  See, my husband and I had an amazing wedding cake.  And not just amazing in its decoration, but amazing in its taste.  Speaking of husband, he just looked over my shoulder and saw what I wrote and called it "a little dramatic."  It's the best cake I've ever had, so I'm allowed to be dramatic.

The cake even kept so well in my parents' freezer that after a year, I was still in love with it. Yeah, most people HATE their year-old wedding cake, but I was begging for more.  Obviously, I need to figure out how to make it.

The cake: champagne cake with strawberry mousse filling (and buttercream icing).  Here's a picture of it after a year of freezing and then thawing.

I decided that I'd try to make it for our anniversary this year.  I asked around on a few message boards and got a whopping ZERO responses.  So much for that.  I found a recipe that sounded decent and committed to it.  It included both the cake recipe and the strawberry mousse recipe.

The night before our anniversary, I made the frosting from my Wilton books, so that was easy.  Then I decided to tackle the mousse.  The mousse recipe had a few jobs in it that I'd never done before.  The first was whipping heavy cream.  I have a handheld electric mixer (no room in this tiny kitchen for a fancy stand one), and whipped the cream like a pro.  I was feeling pretty confident at this point.

Then I had to separate eggs and whip the whites.  I didn't do any research on this, and the recipe was just very bare-bones about it.  I've never separated eggs before, but I do have a tool for that.  It fit nicely over a cup, so I just kept adding them to the cup.  The yolk broke on the fourth one (out of six), so I now learned why this method is a bad idea.  (Pro tip: dump each egg white into the bowl right after you separate it.)  I couldn't get all of the yolk out, so I just moved on.  Once I got my 6, I tried to use my whisk attachment for the mixer to whip them.  Twenty minutes later, I still didn't have stiff peaks.  I've sorta watched my mom make meringue before, so I knew something was wrong.  But it was past bedtime at this point, so I said screw it.  And so I mixed my soft-peaked egg whites into the rest of it.

The result?
Even if I'd gotten it all right, I'm pretty sure this recipe would have still made at least eight times the amount of mousse needed.  There was a frosting recipe included too, and I'm glad I stuck with the one I already knew.

The good news is that the next day, when I actually made the cake layers, the recipe called for another six egg whites whipped to stiff peaks again.  I was definitely not gonna screw this up a second time!  I turned to YouTube and found an informative video about doing it by hand.  I decided that was the way to go.  Of course, I had already done a full workout that morning, including dumbbell activities, but I didn't let that stop me.  Boy, was it another workout!  I had to take a few breaks.  But in less than 5 minutes, I had my stiff peaks!

Then I had to open a champagne bottle for the first time by myself.  There were directions on the bottle that made me think this thing just might go everywhere, even though it was a screw-top Wal-Mart variety champagne.  The sink was full of cake stuff, plus I'd rather not have to clean the floor if it came to it.  After giving it a bit of thought, I decided to do it outside on the patio.  That was a good call, since it ran all down the bottle.  We'll call that a success.

All in all, the cake did NOT turn out anything like our wedding cake (which is also why I refuse to link to the recipe here).  The cake was way more dense--almost like a pound cake.  And the mousse obviously didn't pan out, but the taste wasn't even that great.  I shouldn't be eating raw egg whites anyway, so maybe that's a good thing?

At least those Wilton classes I took last year paid off! 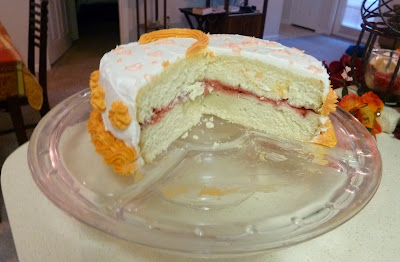 We're still eating it, but I'm definitely on the hunt for a better recipe to try next year!

The list of firsts I experienced with this cake:
Have you had any mousse mishaps?  Or are you on a quest for the perfect recipe for something?