This past weekend, B and I made a quick trip (via airplane) to Lubbock, TX, for his cousin's wedding.  B was a groomsman, and I had the honor of reading a passage from Corinthians (you know the one).

We knew it was gonna be hot there, but supposedly less humid than here.  Yeah, it was over 100° each day, but it wasn't terrible!  Apparently Lubbock is a college town that's home to Texas Tech University.  The rehearsal dinner was actually AT the stadium.  It was quite the site!
If you look closely, you'll see a few people down on the field.  The bride and groom and some others went down there and got their picture on the 50-yard-line!

The town of Lubbock had such a college vibe to it that of course it reminded me of my own college town--Athens, GA.  It made me miss it so much!  I haven't been back there in a few years.  Texas Tech's colors are also the same as UGA's, and the bride used them for the wedding.  I even saw a store called The Red & Black, which is the name of my college's campus newspaper.

One thing about college towns that most people love is the food.  And Lubbock did not disappoint.  Of course there was the old college-town-staple, Jimmy John's, but then there was this:
We were only in town for 48 hours, but I ate here twice.  I just needed a quick snack and you could buy them by the finger!
Oh, and I have to mention the masterpiece created by the awesome waffle-maker at our hotel.

Also, some of my readers will appreciate this next picture.  The groom was in the Marines, and his dad is a Marine retiree, so here's the groom's cake: 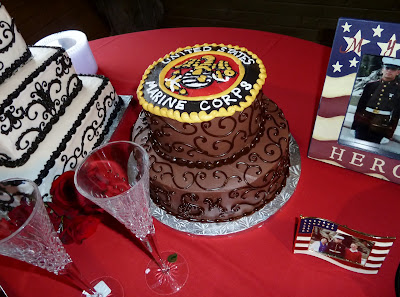 Unfortunately, we didn't get a chance to hit up the Buddy Holly center (yes, he's from Lubbock!).  But at least the wedding ceremony was at a cute little chapel. 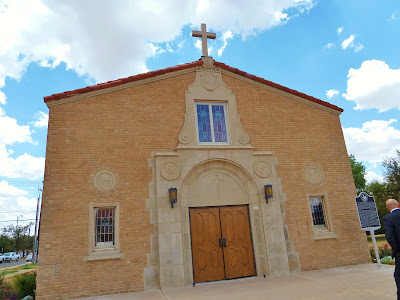 All in all, B and I had a great, albeit brief, visit to the Lone Star State!