Something I've worked hard at since getting married was learning how to menu plan. There must be  something about ensuring the health of another human being that made me want to take it a bit seriously.  Plus, I hate eating fast food (although I crave it often!), and I also hate breaking the budget with dinners out or even those frozen meals.  (The cheap ones ain't healthy, that's for sure.)  My sister keeps telling me that once I have kids, it'll be different and we'll live off of fast food.  (B and I only eat fast food when we're traveling, honestly.)  And my sis also claims that since I don't work, I have time to menu plan.  But I think that now that I've gotten the ball rolling, I should be able to stick with this, come kids or career.  I like keeping our Sundays low-key anyway, and that seems like a pretty good time to block off a half an hour or so to do it.

In addition to being a cheapskate, I hate going to the store (especially the dreaded co-misery commissary).  So the more I plan, the less I have to go.  (And I'm SURE I'll especially hate going to the store once I have to tote along a few little sticky-fingered brats munchkins.)  Luckily for me, B eats almost anything, including leftovers.  That means that I can plan out for 10 meals and it can easily stretch us 20-25 days.  I cook about 3 meals a week, each of which we eat for at least 2 days, and then we go out to eat about once a week and often bring home leftovers.  (In the interest of full disclosure, B's monthly work trip does help stretch the plan out further since I go back to pretending to eat like a single girl again during those few days.)  I went on my big grocery trip on Jan. 4 and didn't go back for a big one again until Jan. 30.  I'm not kidding!  We basically just replenish our milk and banana supply once a week and that's it.

On each meal plan, I always mix it with a few favorites and a few new recipes.  One thing I'm glad that I've done is make a "recipe repertoire."  This handy list frees up space in my brain for more important things, like the quadratic formula (x=‐b/2a ± √(b²-4ac)/2a) or the gestation period of an elephant (22 months).  At the front of my cookbook from friends and family given to me at my bridal shower, I added a page that just lists every meal that I know I'm comfortable making, including the basics.  It's less than 40 right now because I didn't learn to cook until adulthood, but when I really nail something new, I add it.  It's also just a list of guide points, if you want to think of it that way (one entry just says "spaghetti/pasta" -- heaven knows where I can go from there). 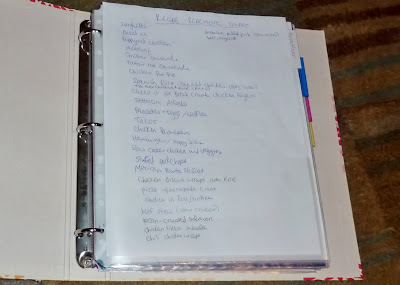 So I use my favorite cookbooks (always my shower one with the repertoire and my Betty Crocker) and scour the index or just see what catches my eye.  I also give consideration to the ones I've saved online, and then just start writing down the ones I want to do.  I read a really good tip on one blog that said only to pull out 2-3 cookbooks so you don't get overwhelmed.  I think the hardest part is balancing out our meals, since I pretty much love anything and everything with ground beef and tomatoes in it.  But I don't want to eat that every day for a month, so I have to stretch a bit.  Lately, I've been making sure to add at least one or two crock pot recipes to my meal plan.  Also, when I realized how everything I know how to make contains meat, I've decided to do at least one vegetarian night per plan.

I think the best thing about my menu plans is that they aren't attached to hard-and-fast dates.  I basically just put the list up on our white board, shop for all of them at once and freeze most of it, and then cross off the meals as I make them.  Yes, this requires deciding the day before the meal which meat to move from the freezer to the fridge for thawing, but it sure as heck beats the daily "What should we have for dinner?" conversation I've heard both my mother and MIL have numerous times.  Sometimes meals on the list never actually happen, but that's alright.  I'm not a gourmet chef (and I'm not even trying to pretend I'm anywhere close), so there's probably a good reason we skipped it.  Maybe next time.  Or maybe never.

I know once our family size does grow, I'll be shopping more often, but I definitely don't want it to be a daily thing!  I also better learn how to make big batches of dinner, so I can stretch those leftovers.  I don't like cooking enough to make it a daily chore activity.

And if you're really at a loss and in a time-crunch, try this awesome website called Supercook.com.  I actually had thought of this idea a few years back, and I'm so glad someone who knew what they were doing made it happen.  You can just enter what you already have in your pantry, and it will give you recipes to make using those.  Voilà, no trip to the store for you!  (You always spend more money than you planned on anyway, right?)

Do you menu plan?  And how long does each plan last?