One of the most common question us submariners' wives (and fiancées and girlfriends) get asked is how we communicate with our men.  It usually goes something like this: "Can he call you from the boat?"  "Will he get letters in the mail?"  "Does he have internet?"  "What about email?"

These questions have various answers depending on what his sub is doing.  Which is generally a mystery even to us wives, but we do know when they're on mission or off or in port or not.  At best, he's in port and has access to all those modern forms of communications (snail mail sent to the boat's address gets delivered in a port).  At second best, he can send an email.  Sometimes it makes it through the ocean, sometimes not.  It's definitely not quick, and there have been quite a few emails that either he or I sent that were "lost at sea."  And then there's the worst form of communication, something I compare to blowing bubbles toward a brick wall and hoping a few of them make it to the other side: the FAMILY GRAM. 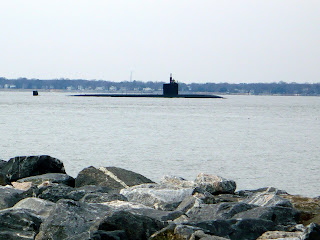 Back in the day before email, Family Grams were the only way a wife could tell her husband what was happening.  She filled out a form with no more than 50 words and either dropped it off or mailed it to someone.  Then her message was combined with other wives' messages into a larger notice that was then sent to the boat.  As for now, in this 'laptop for every child' era, we email our 50-word, all capital letters family gram message to a certain email address.  I sometimes refer to it as a "screaming tweet," but luckily it is a bit longer.  Yes, it probably gets read and screened.  This is a one-way communication--the boys can't send anything while on certain missions--so it's kind of like waving to your actor-friend on stage who can't quite acknowledge you (lest he breaks character) but hopefully hears you.  And yes, sometimes the boys never even receive them.  Sigh.

However, I will say that during the previous mission during my husband's current deployment, he may not have received all my family grams, but he did indeed  receive the most important ones.  Yes my friends, that is how he FOUND OUT HIS ORDERS!  Which is effing ridiculous, in my opinion.  But verbal orders are supposed to come from the CO - who in this case wasn't receiving anything not mission-specific.  And it was smack-dab in the middle of this rather lengthy mission that verbal orders were starting to be handed out.  So I took it upon myself to call the detailer multiple times, leaving a message including every form of communication to find me . . . and that resulted in . . . absolutely ZILCH.  No call, no email, no carrier pigeon, nada.  Why yes, I am still bitter, since you asked.

So then, enter our CO's wife, who is not only a rockstar of epic proportions, but also a saint.  And she has a contact at squadron.  Praise the Lord for connections.  She filled me in on staying in Norfolk, and I sent my "What, Norfolk again?!  I was hoping for Hawaii!" family gram to the husband.  Which he apparently received.  And then a week and a half later, my angelic CO's wife called me back and told me we'd been changed to Pensacola.  Pensacola!  I could live with that!  Back to north Florida, nice white beaches, possible Southern accents, even a new time zone.  I believe the call about this came on April 19.  April 20th, 2010, just happened to be the day the giant BP Oil Spill in the Gulf started.  I didn't mention that in my family gram about our orders change--gotta stay positive for the boys, right?  And yes, he received this one as well.  The Family Gram Fairy was on my side.

One positive I will give to family grams is that it makes life easier.  Any Navy spouse can tell you about how she obsesses over checking her email when her sweetheart is at sea.  Every time we log on, we get our hopes up, and then usually get let down.  But when we know it's not coming, we don't worry about it.  I don't forget about my husband; I just know that all is well.  And I think a lot of sub gals like to pretend that our proverbial "Navy Wife" badge is perhaps slightly bigger because of our lack of communication with the boys.  In each military community, there's a sense of pride--especially for the "who has it roughest" title.  And when the boat is gone, the wives have to defend their title with the other wives.

To that I'll say I thank God every day he's not in the Army.  I'll take my family grams over a year-long deployment to the sandbox any day.  I don't need a badge that big.
Labels: deployment, military spousehood, navy, norfolk, oil spill, pensacola, submarine