I don't like soft drinks.  I gave them up a few years for Lent back in high school, and I never turned back.  I also make a horrible excuse for a Southern Belle, as I cannot stand sweet tea.  And unsweet tea is a punishable offense where I'm from.  Coffee looks (and smells) disgusting, so I'm oh-for-three in the caffeine department.  But at most restaurants, especially fast-food ones, I want more than water.  Enter lemonade.  Sometimes - actually more often - of the pink variety. 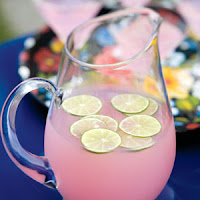 I've been drinking this stuff for years and never questioned it before.  But what the heck is pink lemonade?  Why is it pink?  Is other pink/red fruit added, like raspberries?  But wait, isn't that called raspberry lemonade?  Are there pink lemons?  Or is it just color?  And which does it mix better with, vodka or rum?  These, my friends, are questions that keep me awake at night.  Or, more accurately, keep Google in business.

So I did my homework, mostly thanks to everyone's favorite collaboratively-edited encyclopedia.  (What the hell did we do before Wikipedia?  I kinda doubt there was a pink lemonade article in our '97 WorldBook set.)  Yes, there are pink lemons.  But no, they don't make pink lemonade--the skin is pink, but the juice isn't.  Pink lemonade used to be made from crushed red sumac berries.  Odd, since the only time most of us hear the word "sumac" it's usually preceded by the word "poison".  This potentially poisonous concoction was then sweetened with maple syrup.  Then the sumac market dried up (okay maybe not all of it is poisonous), and maple syrup is ridiculously expensive because it takes so darn long, so now we have . . . a pink version of lemonade.  Sometimes made sweeter than the yellow stuff.  But preferably in a powdered form with a Crystal Light logo on the pack.

My favorite "form" of lemonade is probably the fruit juice-added kind.  Strawberry lemonade, pomegranate lemonade, cranberry lemonade.  Put some sugar on the rim of the glass while you're at and add one of those frou-frou little umbrellas.  It's like summer in liquid form.

As for my evening drinking habits, it seems like this would be easiest:


BACARDI PINK SQUEEZE
1-1/2 oz. Bacardi Light Rum Pink Lemonade
Pour Rum into tall glass filled with ice. Fill with Pink Lemonade.
I'm a fan of easy drinks like the one above.  But during my digging, I did find half a gabillion other drinks containing pink lemonade, especially at this site.  I have also found a veritable wealth of other pink lemonade recipes, including pink lemonade bars, pink lemonade cookies, and even pink lemonade pie.  Maybe I'll start getting inspired by all these great ideas and uses for pink lemonade, but in all probability I'll just go crack open my bottle of rum.