This past Saturday night was a celebration.  A wardroom wives' (and future wives') get-together to celebrate a certain passage of time.  After eating dinner at Catch 31 and drinking wine on the beach under the watchful eye of the King Neptune, our fearless leaders had schmoozed and flirted their way into getting us access to the ever-exclusive Sky Bar.  For the most part, this place is members-only, but it's also open to Hilton guests, since it's on their 21st floor.  But I think that hotel is one of the most expensive on the boardwalk, so no one I know has ever stayed there.  It's a rooftop bar, which sounds cool in theory, but at 10pm, you can't see the ocean below anyway.  It was dark, there were lit-up pools serving as a barrier to the side railing, and there were something akin to beds (check the picture I stole from their Facebook page).  And a couch thing we sat on and quickly realized the pretty white fabric was really just a large towel slip-cover.  Rough hotel towel fabric.  Not even the plushy terry-cloth kind.  You wouldn't even be able to watch a sunset up there, considering that we're staring east into the Atlantic. 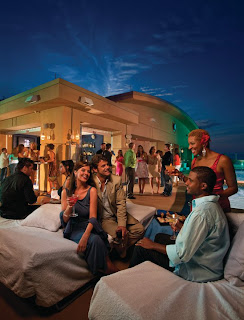 Now what type of people would pay $200 a year to frequent a bar with only two types of wine (including a disgustingly strong red), ridiculously slow waitresses dressed like they were about to take the court at Wimbledon, and pools that no one even put their feet in?  If you guessed slightly creepy old men, you are correct.  The wonky character brigade was actually the most entertaining aspect of this ostentatious place.  There was one guy--who is definitely a regular--walking around in a white boat captain's hat with various patches on it.  Kind of odd bar attire.  Then there was another guy who kept walking by our little towel-bench and counting us - pointing as he did like he was making sure all the kids are back on the bus after the class trip to the zoo.  He did this no less than three times throughout the night.  To take our focus off the creepsters, we decided to find which female patron had the shortest dress.  We found some close competition, but we decided upon a winner.  I don't think this girl could've bent over or even sat down in that thing.  And unfortunately (or probably fortunately?), I didn't have a camera.

Well, I'm  pretty sure that is my last foray into pretentious bars for a while.  The experience reminded me how glad I am that I don't have to play that single person's game any longer.  All image, no substance.  Actually, I never really had to play that game with B, so thank God for that.  But if you wanna play that game (or want a front row seat to watch it) and are of the double-X chromosome persuasion, I hear it's free for ladies on certain Thursday nights.  As for me, I'll stick to my neighborhood watering holes.
Labels: alcohol, bars, deployment, dining out, people watching