the Birth of Audrey Francine

When people ask me how long my labor was with Cora, it's an easy answer. 21 hours. Start to finish. Second babies are supposed to come quicker, right? Right.

Except, not right. Now I'm not sure whether to say I was in labor for 7 hours or 13 days. THIRTEEN DAYS. Let that one sink in. I know this is supposed to be 'the birth story,' but I feel we need to separate this into two parts: the twelve days before, and then the actual birth. If you don't want to hear about all the crap leading up to it (which was a huge emotional roller coaster) and just want the nitty-gritty of my time at the hospital, then click this for Part 2.


Part 1
April 2, 2015, the day before my due date. Also, Holy Thursday. I woke up with contractions. Pretty mild, and I never really know if they're BH contractions or not, but they were timeable to about 10 minutes apart and 30 seconds or less in length. I decided to go into work and timed them with an app on my phone.

They went on all day, time-able the entire time, but never picking up strength or duration. We had set everything in place and my MIL was on her way. I came home from working the whole day and we took a walk to see if it would help. We skipped Holy Thursday services and eventually I went to bed. And then fell asleep. Now I don't know a ton about birth, but if you can sleep through contractions, then it's not go-to-the-hospital time.

I woke up the next morning sorta nauseous and having the same type of contractions. I decided not to go to work, hoping that something might start happening. Around 9:30am, it all just stopped. Since my MIL was there and Cora's daycare was closed for Good Friday anyway, we sent MIL off with her while B and I went to walk around the grocery store to see if we could get something to start.

Nada. I was mad I wasted a day of PTO and still kinda wish I had just gone in late. Oh, hindsight.
Saturday morning, I woke up and went to Zumba class. I felt amazing. Everyone was giving me all kinds of old wives' tales. If you're feeling great, then birth is nigh. And also if you're too tired to do anything else but give birth, then it is nigh. Well, it's all hogwash.
For the following week and a half, I had contractions daily. Weak ones, strong ones, time-able, not so time-able, whatever. I deleted the app on my phone and basically ignored them unless I couldn't. I went to Zumba on the Tuesday after my due date (4 days late), and the baby was kicking me so hard that I had to stop a few times. (Pretty sure she was also doing Zumba.) But then, when it was time to sleep that night, I slept.

I had a Non-Stress test with a nurse practitioner on the following Friday, at 41 weeks. Everything was fine, but I was still holding around 1cm. Cora had her spring show at daycare that night, which I had hoped to make one way or another. I did, and it was adorable.
Right after Cora's class performed, B immediately left for his Reserves weekend in Indianapolis. He spent his weekend in a secured room, no phones allowed, so he walked outside once an hour to check for any news. Nothin'. My parents had come into town as planned on their way to Chicago, and Mom and I hung out, shopped, and made some freezer meals.

I had been hoping to hold out until exactly 42 weeks for induction, but we had a snag.

The blasted military. Still haunting us even years after my husband left Active Duty. As a Reservist, life usually goes as planned, one weekend a month and two weeks a year penciled in on the calendar and generally unchanged. Well, this one was even on the books, too. Two Reserve weekends in April, the second one being a plane ride away. A weekend for a training that he needed to do for his two-weeker the following month. We hadn't worried about it because second babies come earlier, right? Except, not right. And because our baby was holding out on actually being born, it was a weekend that would essentially choose her birth date.

I hated the idea of induction. Truly, truly hated it. I didn't get much sympathy, since both the birthing women and the doctors in this town seem to love the idea. My doctor generally induces at 41 weeks, but she said she'd let me go to 42 if I wanted. But at 42 weeks B wouldn't be there. So, minus 2 days, and that's what we had. The day before he left, April 15. I kept praying baby would decide to come before that, but she was a stubborn one.

Part 2
April 15, 2015. 41 weeks, 5 days. We woke up bright and early to arrive at the hospital at 6am like we were instructed. B's aunt came over to take care of Cora who was still passed out asleep in bed.

We walked into the hospital and checked in at the desk. It almost felt like I was going in to make a deposit at the bank, not birth a child. My nurse was great, and we had the IV stuff in by 7am. It was a pitocin-only induction, thankfully. I decided to not immediately get the epidural, just to see what my tolerance was.
My neighbor is a night nurse at a different hospital but has a good relationship with where I was at, so she came by after her shift was over. She was probably more excited than the two of us about the impending birth of our baby, and I'll admit her joyful attitude was annoying me. I'll blame the pitocin. And the fact that I'd been hoping every day for the past two weeks was baby day. She got mad at B because he wasn't helping me enough (poor guy literally did not know how to help--we never took a class on natural birth or anything). She got me set up on a ball to see if it would help. Turns out I hated it. I mostly just paced around with the IV pole and went to the bathroom a lot. We also discussed our name list a bit further and nixed a few more off (we walked in with 11 combinations of acceptable names!). After a bit, I realized that I was scared of every contraction and totally not trusting my own body. I mean, those pitocin contractions HURT. BAD.

I'm not really sure why I was scared. Yes, it was painful, but I think I was just psyching myself out. Also feeling like my crotch was about to split in two, and I just plain didn't like that. I had some tearing with Cora's birth that I think I never fully healed from, so that was just adding an extra layer on top of everything.

So around 11am, I asked for the epidural. I was pretty sure it would come to that anyway, so I didn't feel defeated. The nurse checked me around noon when the epidural went in and I was around 5cm.

Remembering my epidural from my first birth, I started settling in for a longer haul. I messed around on my phone and turned on the tv while propped up on one side. It hadn't completely taken on the other side after a half hour, so they propped me up on the other side. About 10 minutes after that, I felt something wet. I told B to call the nurse because I wasn't sure if my water had broken or not.

Sure enough, it had. Nurse checked me again and said I would be pushing soon. I was at 9.5cm! The epidural totally relaxed my body to just open up. Crazy.

They weren't going to call my doctor for my delivery because she had delivered a baby in the middle of the night, and it's pretty common to just have another doctor from my practice step in if they're on call. However, the timing was perfect and my doctor had shown up to do a postpartum check on another mom. She came in to help me get started on pushing and see where I was at.

I pushed for about an hour, with most of that time being just me and B and the nurse. This was so different than my previous experience when it felt like there were 20 people in the room for the entire duration. After making some good progress for an hour, my doc came back in and within a few more pushes, baby was out!!

She didn't cry immediately, and both B and I looked at each other thinking something might be wrong. But no one was freaking out and the baby-nurse sucked the goop out and there was a cry. A cry that we could easily tune out because it was so much quieter and lower in frequency than our first baby's. And luckily for us, it has stayed that way! (We have even watched some videos of Cora as a baby to compare because we were starting to think we were delusional.)

I could tell right away that she was shorter and heavier than Cora, and I was correct. It took a little bit of time to name her, but I basically gave her the first name of Audrey, and then I asked B what her middle name was. He picked Francine, and I thought it was perfect.

And our little Audrey Francine is the most perfect addition to our family. 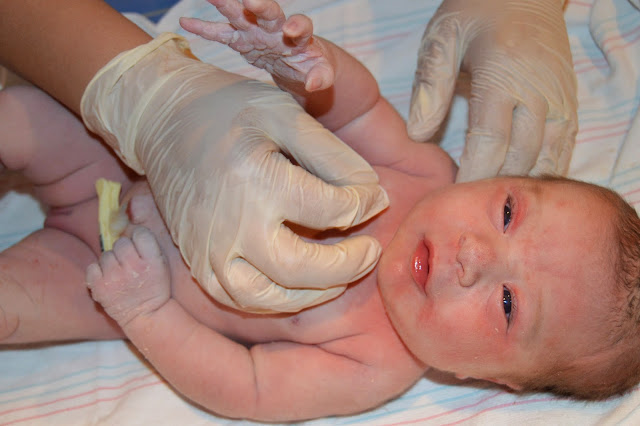 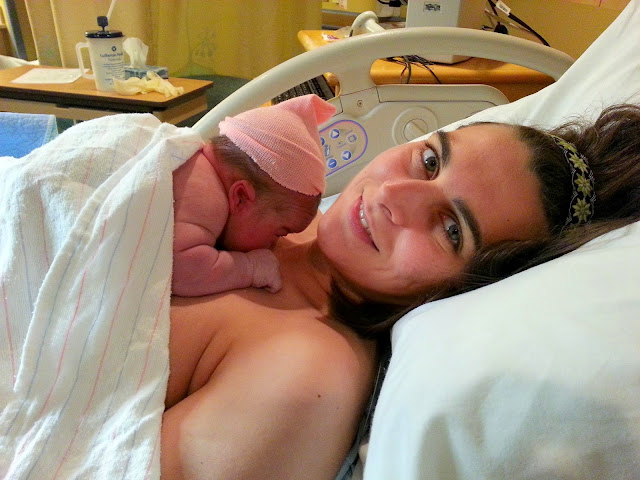 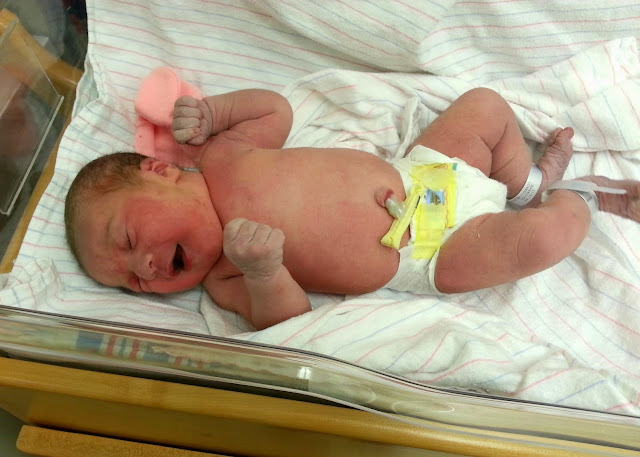